These are the characters of the tokusatsu Kamen Rider Blade. 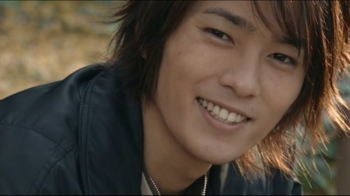 Kenzaki was a man who was orphaned at 11 by a fire. Years later, the organization BOARD scouted him out, making him a candidate for Rider System-02, Blade. He displayed unusually high fusion coefficiency with the Undead involved in the Rider system, and eventually became the partner of Rider System-01's user, Sakuya Tachibana.

As the Battle Fight continues, Blade acquires the Rouse Absorber developed by Kei Karasuma, using it at first to assume Jack Form with the Category Jack of Spades Fusion Eagle, and then King Form, with the power of all 13 Category Spades Undead instead of merely the Category King of Spades Evolution Caucasus. This increased King Form's power at the cost of eventually turning Kenzaki himself into a Joker Undead. He uses this in the finale to allow Hajime/the Black Joker to continue living as a human, yet with him as the Navy Joker and to stay away from Hajime.

Tropes exclusive to the Ark as Kamen Rider Blade 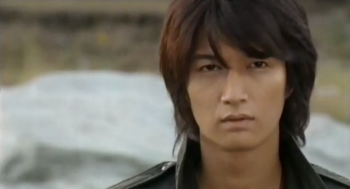 Sakuya Tachibana was the second person chosen by BOARD to use the Rider System-01, Garren, after the first user Go Kiryu was determined to be too incompatible. Tachibana fears that continuous use of the system would erode his DNA, which is why he attacked Kei Karasuma, seemingly releasing Undead and betraying BOARD.

Later, he manages to be manipulated by Isaka/Peacock Undead for the latter's sinister plans, until it is revealed that Isaka killed his girlfriend Sayoko Fukasawa. With this he defeats the Undead and in repentance takes Mutsuki/Leangle under his wing. In the Final Battle, he fights the Category King of Diamonds Giraffa, until it ends with Garren nowhere to be seen and the Giraffa Undead sealed. But returns in the finale.

Tropes exclusive to the Ark as Kamen Rider Garren 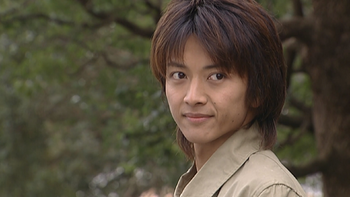 A mysterious photographer living with the Kurihara family, with the ability to become a Kamen Rider. In reality, the alter ego of the Black Joker Undead, whose victory in the Battle Fight would cause The End of the World as We Know It. He uses the Category Ace of Hearts Change Mantis to assume the form of Kamen Rider Chalice, and the Category Two of Hearts Spirit Human to assume a human form. The combination of the Mantis Undead's fighting spirit and the Human Undead's compassion helped to control his natural impulses as the Joker. After witnessing a man's death at the hands of one of the Royal Club Undead, he vows to protect the man's family adopting the persona of Hajime Aikawa. After the Caucasus Undead steals most of his cards, including the Category Ace of Hearts Change Mantis, he begins to regress into his Joker form, with Leangle unsealing his cards in an attempt to control him. The Joker continues to rampage, however, until he acquires the Evolution Paradoxa card, allowing him to access Wild Form.

By series end, with all other Undead sealed, he regresses to his true nature as the Black Joker, dooming life on Earth. Eventually Kenzaki takes it upon himself to defeat Hajime, not by sealing him (though this provides the plot of the Missing Ace film), but by becoming a Joker himself, allowing Hajime to resume living as a human with the Kuriharas.

Tropes exclusive to the Ark as Kamen Rider Chalice 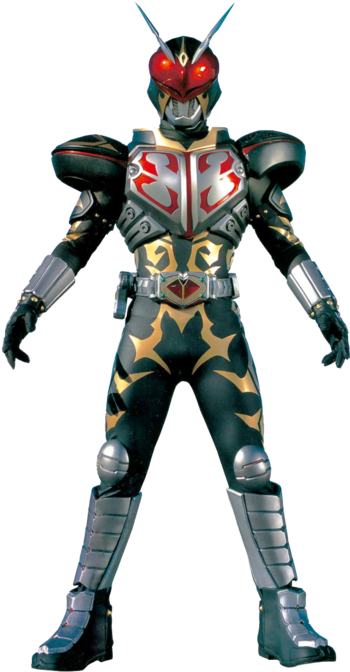 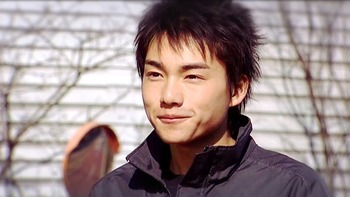 Mutsuki is a troubled highschool boy chosen by the evil Spider Undead to become Leangle. Unlike the other two BOARD-based Rider Systems, Leangle has no access to Jack Form, yet can unseal Undead to aid in battle. While his Ace Undead is evil, his Royal Club Undead seem to be kind: Category Jack/Elephant Undead does not wish to fight much (until he finds out the limits of his enemies' power), Category Queen/Tiger Undead has a strong sense of justice, and the pacifist Category King/Tarantula Undead aids the Riders in his human persona Noboru Shima.

With the sacrifices of the Tiger and Tarantula Undeads, Mutsuki is able to overcome the Spider Undead's evil influence. With Garren nowhere to be found after the Giraffa Undead's unsealing, he assists Blade in dealing with the Darkroaches as Blade himself goes and faces Hajime as the Joker.

Tropes exclusive to the Ark as Kamen Rider Leangle

One of the few remaining BOARD members after the attack on the organization, she sets up a command post at Kotaro's residence in order to help Kenzaki track down the Undead.

An aspiring writer with whom Kenzaki moves in after the latter failed to pay his rent. He likes drinking milk.

A young girl who befriends Hajime, and makes the mysterious man discover what it is to be human.

The Board Of Archaeological Research Department developed technology to combat the Undead, making the first two Rider Systems and their support gear. Is destroyed in the first episode after Tachibana's apparent betrayal.
Kei Karasuma

A professor who created the Rider Systems 01 (Garren) and 02 (Blade), as well as 03 (Leangle) under the directions of Isaka the Peacock Undead. He entrusted the Rouse Absorbers to Noboru Shima, despite knowing of the latter's nature as an Undead. He also knows of the secret that Blade's King Form has...

Shiori's father, who unsealed the Undead, seemingly being killed in the process. Turns up later seemingly alive, only for him to be revealed as the Trial B Undead, originally programmed by the real Yoshito Hirose to protect his daughter. However, Tennoji reprogrammed him to monitor the Battle Fight, but after sacrificing himself to protect Shiori from Trial G, he remembers his true purpose.

Chairman of the BOARD organization. Set up the Battle Fight in his favor, and created the hybrid Undead Category Ace Kerberos, wishing to use it to rule the world. While he manages to create (and eventually fuse) with Kerberos, he is killed by the Giraffa Undead after his defeat at the hands of the Riders.

Undead are the kaijin of the show. There are 52 or rather, 53 Undead each competing in the Battle Fight, with the victor's species gaining dominance over the world. The winner of the previous Battle Fight ten thousand years ago was the Human Undead, resulting in the dominance of humanity.

Most of the "numbered" Undead are only capable of speaking their own language; however, those belonging to the so-called Royal Club can take on human disguise and speak human languages like Japanese. Their motivations are diverse and complex, from one fond of humanity (Tarantula Undead/Noboru Shima) to one with very sinister designs (Spider Undead).

The Category Jack of Diamonds Undead and the first of the Royal Club Undead to appear in the series.

The Category Queen of Hearts Undead.

The Category Queen of Spades Undead.

The Category Jack of Spades Undead.

The Category Jack of Hearts Undead, proclaiming himself to be an "Undead Hunter".

The Category Jack of Clubs Undead.

The Category King of Clubs Undead and an old friend of Karasuma in Tibet.

The Category Queen of Diamonds Undead.

The Category King of Spades Undead.

The Category Queen Of Clubs Undead.

The Category King of Diamonds Undead, the last of the Royal Club Undead to appear in the series, and the first to learn the truth of the Battle Fight.

The first of the 3 Kerberos Riders, notable for using the original Change Kerberos card. In reality, he's a second Joker Undead, having hidden in the shadows during the events of the TV series.
Natsumi Miwa / Kamen Rider Larc

The second of the 3 Kerberos Riders, using a copy of the Change Kerberos Card.
Shin Magaki / Kamen Rider Lance

The third of the Kerberos riders, who, much like Natsumi, uses a copy of the Change Kerberos Card. Notable for being the only Rider whose A.R Counterpart has the exact same name as him.