Section about the minor KND villains.

An adorable young girl who, whenever angered, transforms into a monstrous teenager. Voiced by Grey DeLisle as Laura and Dee Bradley Baker as The Big Badlosecent.

A man who has been seen conducting various money-making operations at the expense of children. Voiced by Tom Kenny.

An eternally diseased villain who wishes to spread his cold to everyone else in the world. Voiced by Tom Kenny.

The head of the Soda Control Board, who has attempted to outlaw soda consumption by anyone under 13 years of age. Voiced by Jeff Bennett.

A vampire who spanks naughty children. Voiced by Daran Norris. 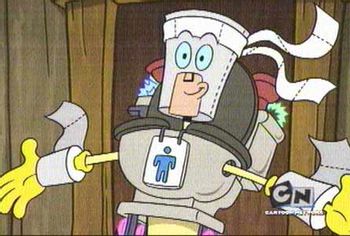 Lou Pottingsworth III/Toiletnator
"Kids Next Door, prepare to be flushed!"

The most incompetent villain in the world, Toiletnator gets no respect from the Kids Next Door or his fellow villains. Voiced by Dee Bradley Baker. 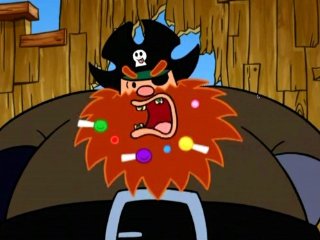 A spirited candy pirate who loots and plunders candy from neighborhood children. He respects Numbuh 5 and seeks her as an apprentice. Voiced by Mark Hamill.

A pair of villains who use robotic Super Chairs to fight the KND. Mr. Wink is voiced by Tom Kenny and Mr. Fibb is voiced by Dee Bradley Baker.

Rupert Puttkin/The Great Puttinski note It has been reported that in some airings, he was named Lenny Puttkin, but as this information came from TV.com's formative years, it cannot be confirmed

A former champion mini-golfer until his winning streak was broken by Numbuh 2 beating him. Humiliated, he tried to get even with Numbuh 2 by having him shrunk so he could kill him in one last game of mini-golf. Voiced by Rob Paulsen.

An old lady obsessed with force-feeding her disgusting food to children to fatten them up, believing that a child that is too fat to move can't get into trouble. Voiced by Grey DeLisle.

A cafeteria worker at an old folks' home who goes out and steals kids' lunches so he doesn't have to cook for the elders himself. The senior citizens are less than grateful for his..."heroic" deeds. Robin Food is voiced by Rob Paulsen, while the Hungry Man known as Little Juan is voiced by Roger Rose.

An old woman who lives with thousands of black and white cats. Voiced by Grey DeLisle. 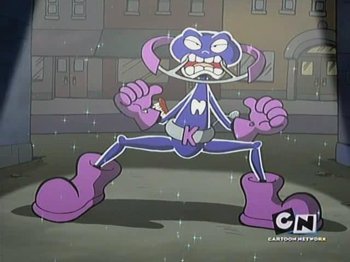 A villain obsessed with dental and oral hygiene. He was kicked out of dental school due to wanting to put braces on babies and was forced to work in his family's candy shop, where the sight of children ruining their teeth with sugar drove him to madness, and eventually dental vigilantism. Voiced by Tom Kenny.

An insane scientist whose main goal is to create the perfect snowcone. Voiced by Frank Welker.

A boy who thinks he is a king and usually tries to force Numbuh 3 to marry him, but eventually chooses her sister Mushi instead. Voiced by James Arnold Taylor. 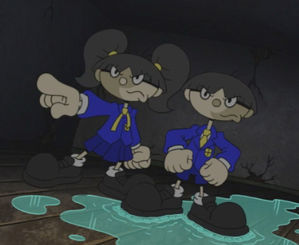 A pair of Japanese twins, who work for Father. Voiced by Tom Kenny and Tara Strong.

A Cheese Shogun who believes cheese to be more valuable than gold. Voiced by Kevin Michael Richardson.

A gang of cowboy-style robbers who work for the Delightful Children From Down The Lane. Voiced by Jennifer Hale (Runt and Dixie), Tom Kenny (Goof), Ben Diskin (Wilbur) and Dee Bradley Baker (Lunk). 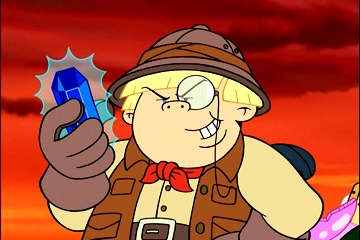 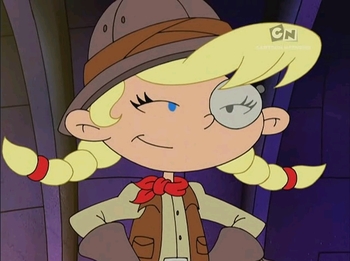 A former friend of Numbuh Five and current candy-hunting rival. He greedily seeks forbidden candy regardless of the consequences. Voiced by Dee Bradley Baker/Candi Milo.

Former 4th grade president of Gallagher Elementary, who eventually becomes evil after the KND once helped him to the city hall from the Delightful Children and their Father. Voiced by Tom Kenny.

The principal of St. Rita's Preparatory School, who attempts to turn all the boys on the planet into girls. Voiced by Candi Milo.

A French chef who was once hired by Father to create a giant ice cream cake for the Delightful Children. He only appears in "Operation: C.A.K.E.D.-F.I.V.E." Voiced by Jess Harnell.

A candy pirate who once tried to steal a bunch of licorice trees from an island off the coast of North Dakota. A curse ended up befalling him and his crew, which caused the licorice to turn from red to black and the pirates to all become black licorice skeletons who only come alive at night. Voiced by Marc Graue.

A senator overly concerned about children getting hurt who tries to set things right by creating an army of Safety Bots in "Operation: S.A.F.E.T.Y." Voiced by Dave Wittenberg.

Three British children who work for Father and are the enemies of Sector E. Voiced by Tom Kenny, Jennifer Hale and Frank Welker.

A toilet-themed villain with foul language. Voiced by Maurice LaMarche.

A wizard who has power over dodgeballs and has set out to prove adults rule the dodgeball court. Voiced by Dave Wittenberg.

A nurse who worked at the same school the Kids Next Door go to. She also has another job as a baker with apple crumbles as her specialty. After Numbuh Two discovered the disgusting secret of her apple crumbles, she was forced to work at a Rainbow Monkey retirement home after the bakeries blacklisted her.

Lydia Gilligan, Sheldon and Maurice. A trio of senior citizens who are able to temporarily revert to a more youthful form by using Anti-Aging Creme. Their ultimate weapon is their Combining Mecha, the Senior Ciizen Robot. Voiced by Candi Milo, Tom Kenny and Dee Bradley Baker respectively.

KND Splinter Cell (MASSIVE SPOILERS!)
A traitorous shadow group within the Kids Next Door Organization who intend to destroy all adults on Earth, good or bad, and is unknown to Supreme Leader Numbuh 362 or most KND operatives.