Characters appearing in The Geeky Zoologist's reimagining of Jurassic World.
open/close all folders

Vivian Krill
A technician and Cruthers' best friend.
Neil Harriman
The liaison technician with the Grey Guard.
Daniel Connors
A technician.
Katie Adamson
A technician in charge of the Reserve's monitoring.

Jonas Roth
The chief park keeper and large theropods curator.
Owen Grady
A keeper who specializes in raptor behavioural research. Before working at Jurassic World, he was part of the US Navy Marine Mammal Program.
Barry Sembène
A French keeper who works with Grady on the IBRIS program.
Leon Evans
An intern under Owen Grady's supervision.

Lambert Ross
The innkeeper of The Merry Iguanodon and a former soldier of InGen Security.
Walter
A safari guide.

In General
The Slayers are InGen's own black-ops team, originally created during the Saurian Wars to defend the construction sites and crews against the attacks from feral dinosaurs.
Gregor Sherman
The leader of the Slayers.
Olivia Decker
Sherman's right-hand woman.
Damian Parker
The youngest of the Slayers. His father was also a Slayer.
Paco Cortès
A slayer part of the Tun-Si tribe, the natives of Isla Nublar. He was born on the island
Esmeralda Pizarro
Another Tun-Si part of the Slayers and an old friend of Cortès. Unlike him, she was born on the mainland.
Reynald Faraci
Kevin Leng
Nolan Olsen
The tallest of the Slayers.
Léopold Butu
Before he joined the Slayers, Léopold Butu was a Congolese mercenary who worked with US agents in Central Africa.
Ford
McNamara
Arana
A Costa Rican slayer.
Mendez
A Costa Rican Slayer

In General
Mercenaries hired by InGen and sent to Isla Nublar to act against the Indominus threat and ensure the evacuation of the corporation's most vital assets.

InGen Board of Directors 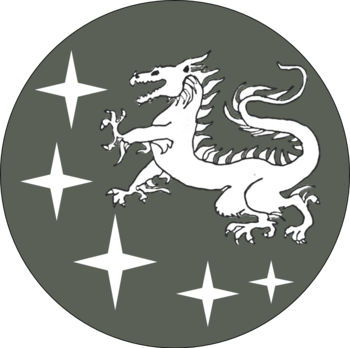 Coat of arms of the Grey Guard

The Grey Guard is a UN-backed paramilitary organisation found in the Five Deaths Archipelago and on Isla Nublar. It is dedicated to the protection of the aforementioned archipelago, populated by feral de-extinct reptiles escaped from InGen's Site B on Isla Sorna. It also supports the staff of Jurassic World in ensuring the safety of the park and its employees and visitors. As the guards are used to deal with dinosaurs and other dangerous de-extinct species, they are useful in capturing escaped and/or rampaging animals. The current marshal is Helmut Störmer.

The organisation's motto is Cave Dracones, Beware the Dragons in Latin, and its names comes from the greenish grey colour of its uniforms.

Simon Masrani
The CEO of Masrani Global and the owner of Jurassic World.
Pilar Morales
An inhabitant of Bahia Anasco, a village located at the end of the Nicoya Peninsula. She is the POV character of the epilogue.
Eduarda Mena
Arthur Butler
A US Air Force colonel sent to Isla Nublar for talks with the insurgent grey guards.
Cassandra Landis
GBC envoys
A trio of envoys from the Global Broadcasting Company who had been invited in Jurassic World for the sponsoring of the park's upcoming attraction, the I.rex Coliseum.—-
Karen and Scott
The parents of Zach and Gray.

Dinosaurs and other creatures

The Indominus
In Gen's latest creation, an apex-predator species which is the result of the genetic hybridation of several species, both prehistoric and modern. Two individuals were cloned but one of them was killed by the other, which grew to become a terryfing monster like nothing seen before. She triggers the fall of Jurassic World.
Roberta
Jurassic World's mascot, an adult female Tyrannosaurus rex. Originally bred for Jurassic Park, she escaped during the 1993 incident and lived in a feral state during almost a decade, before being recaptured in 2002 by In Gen Security to be integrated into the new park's collection.

See Jurassic Park for tropes specific to that film.

See Jurassic Park 3/Characters for tropes specific to that film.

Achillobator is a large dromaeosaurid species that was bred on Isla Nublar as an alternative for the neoraptors. Owen Grady raised four of them since birth and trains them as part of the IBRIS program.
The Pack in General
Blue
The oldest of Grady's achillobators and the pack beta.
Charlie
The youngest individual of the pack.
Delta
One of the pack's middle individuals.
Echo
The pack's omega.

Ankylosaurus
A large armoured dinosaur with a clubbed tail.
Anzu
A large oviraptorid dinosaur.
Apatosaurus
A diplodocid sauropod from the Late Jurassic.
Avimimus
A small oviraptorid.
Baryonyx
A spinosaur known for the enlarged claw on its finger.
Compsognathus
A tiny dinosaur that travels in swarms.
Corythosaurus
An hadrosaur with a round crest that looks like a corinthian helmet.
Dimorphodon
A small pterosaur from the Early Jurassic.
Dryosaurus
A bipedal ornithopod from the Late Jurassic.
Gallimimus
A large ornithomimid.
Geosternbergia
A pteranodontid pterosaur. While individuals are housed in the Cartago Aviary on Isla Nublar, feral colonies exist in the Five Deaths archipelago.
Giraffatitan
A brachiosaurid sauropod.
Harpactognathus
A type of pterosaur that lives in the Northern Aviary alongside the larger Quetzalcoatlus.
Henodus
A turtle-like placodont.
Hypsilophodon
A small bipedal ornithopod from Cretaceous England.
Kunbarrasaurus
A sheep-sized ankylosaurian from Australia.
Mamenchisaurus
A gigantic sauropod with a very long neck.
Mantellisaurus
A medium-sized iguanodontid.
Metriacanthosaurus
A medium-sized carnosaur from Jurassic England.
Mosasaurus
A gigantic marine squamate from the Late Cretaceous. An adult female is the biggest attraction of Jurassic World's Oceanarium.
Neoraptor
The first dromaeosaurid species bred by In Gen and one of their most dreaded creations as they are fast, cunning and very deadly predators. Once referred as "Velociraptors", they actually are a genetic hybrid of Achillobator giganticus and Deinonychus antirrhopus. Before the Achillobator pack, the IBRIS program involved several packs of this species but in 2013, an incident occured where one of the individuals attacked Owen Grady. Said individual, a female named Andromeda, was shot and the others neoraptors were transferred to the quarantine paddocks. Three subspecies are known: Neoraptor athertonii tigris, whose males are striped like tigers while the females are brown; Neoraptor athertonii iroquoii, the most bird-like of the three subspecies as the males sports a sagittal crest of feathers; and an hybrid subspecies of the first two.
Nothosaurus
A Triassic marine reptile.
Ornitholestes
A small theropod from the Jurassic. Can climb trees with ease.
Pachycephalosaurus
A ornithischian dinosaur with a thick skull roof.
Pachyrhinosaurus
A centrosaurine ceratopsian known for its massive and flattened bosses above the nose and the eyes.
Parasaurolophus
A hadrosaur known for having a tubelike crest on the back of its head.
Pegomastax
A heterodontosaurid dinosaur with enlarged canine-like tooth and a coat of quills.
Platecarpus
A small mosasaur.
Proceratosaurus
An early tyrannosauroid species that was housed in Jurassic Park when it fell. Between 1993 and the early 2000s, a feral population was established on Isla Nublar and was a major obstacle during Jurassic World's construction.
Ptychodus
A large durophagous shark from the Cretaceous.
Quetzalcoatlus
A famous pterosaur housed in the Northern Aviary and one of the last to have evolved back in the Cretaceous.
Rhamphorhynchus
A small pterosaur with a long tail and needle-like teeth.
Shantungosaurus
A gigantic hadrosaur from China. The main male, Bucephalus, appears on a couple of occasions during the story, acting as a threat for the protagonists.
Stegosaurus
A famous dinosaur known for its back plates and spiked tail.
Styracosaurus
A medium-sized ceratopsian known for its long nasal horn and its horned frill.
Therizinosaurus
An herbivorous theropod known for its giant claws.
Tupandactylus
A tapejarid pterosaur known for its prominent sagittal crest.
Triceratops
A famous ceratopsian with three horns.
Unenlagia
A piscivorous dromaeosaurid that can be encountered in the Reserve.
Yinlong
A primitive marginocephalian from Jurassic China.