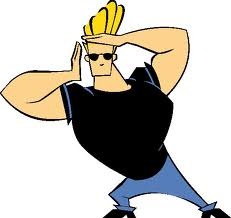 The main protagonist, as the name of the series suggests. He frequently tries to hit on chicks, but to no success throughout the course of the series. Check out his page.

Johnny's dear sweet mother who would do anything for her baby and vice versa. 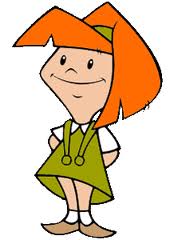 The "annoying little neighbor girl" who has a secret crush on Johnny and likes to play with him and is also a frequent source of Johnny's frustration. 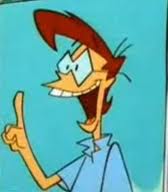 A nerd who insists that he and Johnny are total best friends, much to Johnny's disappointment. 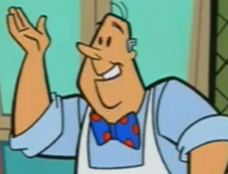 The owner of the local diner that Johnny enjoys for an odd reason.

A boy who lives in the jungle, and is considered its prized jewel.

A boy who goes to school with and has a crush on Little Suzy.

A crazy old man who seems to be stuck in the Old West, and in every appearence he seems to be after gold in all the wrong places.

Chronos, MASTER OF ALL TIME
A very large hungry grizzly bear out to get Johnny. He lives in a cave with various sorts of clocks. He calls himself the master of time.
Fluffy
A werewolf who Johnny meets after answering a personal add. By day time, she is a gorgeous, flirtatious woman but during the full moon, she transforms into a werewolf...
Stinky Brownstein
Johnny's childhood nemesis who used to prank him all the time. She moves back to the neighborhood with a stunning new appearance and seems to be interested in Johnny, who still doesn't trust her.

Becky Jones the moose
A female moose who "marries" Johnny as part of the Wilderness protection program in order to hide from the mob.
Heather Aspund
A woman whom Bunny sets Johnny up on a date for Valentine's. She is an attractive redhead who for all intents and purposes, is very similar to Johnny and the two hit it off....
Rootsie

The daughter of the chief of a forest tribe who nearly married Johnny in one episode. 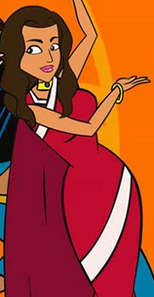 A woman introduced in the hour long special Johnny Bravo Goes to Bollywood. Sumi quickly fell for Johnny, and is quite possibly his only potential love interest. Not that he has a problem with that or anything.

A Supervillain with an obsession for candy, chocolate, and all things sweet. He appears intended as a foil when Johnny tries to be a superhero but proves to be surprisingly dangerous for such a hammy silly villain, especially against someone as strong as johnny

The Sensitive Male
A short, balding seemingly nice man who Johnny once asked for advice on how to pick up woman. He is later revealed to be a fraud who just pretends to be nice in order to get women to date him.