Characters / Jimmy and the Pulsating Mass

Jimmy
"I am eight years old. I like video games, coloring, and Mom, Dad, Buck, and Uncle Lars." 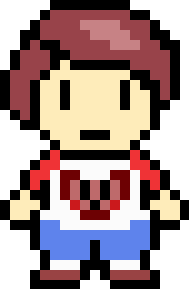 Jimmy is a shy 8-year-old with the power of empathy. This allows him to take the form of the various monsters he fights and use their abilities in battle.
Advertisement:
Buck
"Buck listens to music that hurts my head. Buck works out and can pick me up with one hand." 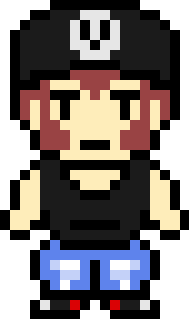 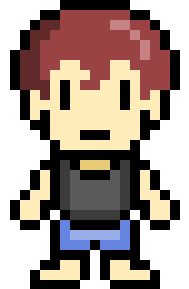 Jimmy's older brother. Buck is Brash, which gives him a chance for his basic attacks to hit twice.
Helga
"Helga is my mom's name. She is pretty and has a pretty singing voice."
Jimmy's Mom. Helga is Optimistic, which grants her immunity to the Sick, Sleep, and Immunodeficiency status conditions.
Andrew
"Andrew is my dad's name. Sometimes he says hard words I don't get." 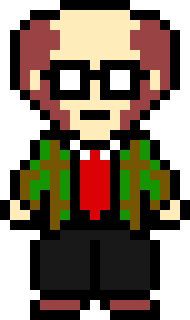 Jimmy's dad. Andrew is Erudite, which passively regenerates his MP in combat every turn.
Lars
"Uncle Lars lives with us cause Grandma died. He plays video games with me and owns lots of toys." 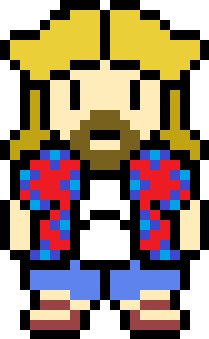 Jimmy's uncle and Helga's brother. Lars is Lazy, which passively regenerates his HP in combat every turn.
Jonathon Bear
"Jonathon Bear lives in a forest with his animal friends. Jonathon Bear is filled with stuffing and can talk." 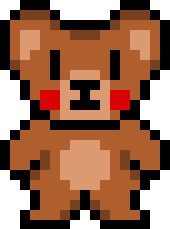 A teddy bear Jimmy owns based off a popular children's show character. Jonathon is Supportive, which makes items used by him doubly effective.
Advertisement:
Hitomi
"Hitomi is like a girl in a show Uncle Lars watches with me. She's different cause her hair is purple." 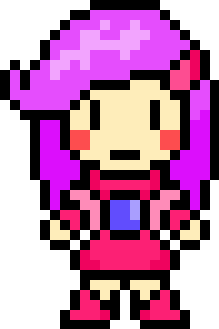 A Magical Girl who joins the party when they infiltrate Shinryu Academy. Hitomi is Fashionable, which gives her an additional equipment slot for Trinkets.

Information Guy
A nerdy-looking man that dispenses information to Jimmy. Sometimes he relays information in person, sometimes through a monitor.
Mr. Marvelous
A frog NPC wearing a dapper outfit that Jimmy meets several times during his adventure.
Rubik
A traveling salesman who will sell you rare items whenever you meet him.
Advertisement:

Timothy Mouse
The son of the mouse family who wants to go on an adventure just like Jimmy.
Mr. Cat (spoilers)
A cat who rented out a room in the Mouse family Inn. Eventually, he kidnaps and violently murders Cornelia Mouse. He serves as the boss of his dungeon under Unbreakable Bridge.
Mr. Grouse (spoilers)
Once your friendly neighborhood banker from the tiny town of Smile, Mr. Grouse's lust for money turns him into a callous executive over the course of Jimmy's adventure. He waits on the top floor of the Accelerated Dynamics building in Shinryu.

The Queen Bee (spoilers)
"I hate you, Jimmy. I hate every drop of rotten blood inside your carcass. I hate every mole and mark creeping up your back."
The once friendly queen of the Bees of Homeflower. She was afflicted by the Pulsating Mass and turned into something far more sinister...

The Pulsating Mass and Petty Thugs

General
A group of punks and thugs hired by the Pulsating Mass to serve as his minions, and led by Punch Tanaka. They are the main enemy organization of the first part of the game.
The Pulsating Mass
The titular villain of the game. An all-consuming Eldritch Abomination seeking to swallow up the entire world.
Punch Tanaka
"Punch is really cool and owns a bunch of motorcycles. I've never ridden one. Maybe he'll let me!" 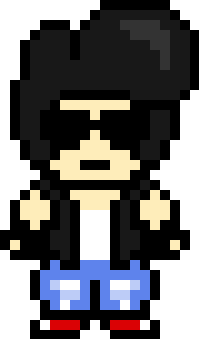 The leader of the Petty Thugs. Once he joins your party, Punch is Shifty, which gives him a higher success rate when stealing from enemies.
Johnny Knives
The first of the trio of him, Dee Dee, and Big Enormous. He is a bald man who wields a pair of knives.
Dee Dee
The second of the trio of her, Johnny Knives, and Big Enormous. She is a punk-rocker like woman who specializes in kicks.
Big Enormous
The third of the trio of him, Johnny Knives, and Dee Dee. He is a big, fat powerhouse.
GAMM-E
A robotic version of Jimmy's grandmother, and the AI of the Iron Flamingo ship. She initially works for the Pulsating Mass to help capture Jimmy, but upon learning what its intentions for him actually are, ejects her family out to set up the second third of the game.

Residing primarily in the dark and twisted areas of Jimmy's dreamscape colloquially referred to as 'Nightmare Zones', they offer great rewards...if you can beat them. Their affiliation with the primary villains of the game is varied and often ambiguous.

Slither
An enormous snake that serves as the boss of the first optional Nightmare Zone, generally referred to as "Slither's Dungeon" for convenience.
Grimclaw
A once normal crow that was corrupted into a hideous monster by The Pulsating Mass. The boss of the second Nightmare Zone (listed as ??? on the world map).
Ebeezil
"It's already unusual for a dreamer to slip into my realm, but to make it this far? You're dreaming deep, indeed."

The Emperor of Dreams, who rules over Ebeezil's Domain. Within lies his castle, supposedly the nexus of all dreams. According to a non-hostile Sleepwalker, all who enter are trapped and doomed to wander forever; dreaming, yet unsleeping. If he falls asleep, he'll cause the end of the world.

Turnbuckle
An abandoned toy Jimmy once played with, he's the general of the abandoned toy army based in Turnbuckle's Mansion. Furious at his abandonment, he seeks revenge on Jimmy.
Imaginary Numbers
Found at the end of the Asymmetrical Cavern, the Imaginary Numbers are an abstract entity that attacks Jimmy and his party for no discernible reason.
The Mad Queen
The former queen of Legato, she was a kind and just ruler before going mad, and had to be banished by the Legato Knights. She now resides in her castle on the other side of a mirror, skinning anyone who dares to enter.
Golden King
A huge golden statue surrounded by a massive treasure trove. The Golden King and it's trove are available for the taking at the end of the Halls of Greed... If you can beat him, of course.
Beach Babe
An undead, bikini-clad girl who haunts the beaches of Bonita Vista.
The Whisper Weaver
A ginormous spider hidden in the depths of the abandoned mines of The Giant Garden.
Totem
A strange object found in a crypt on Information Isle that appears to be controlling the local population.
Black Prophet
The leader of a doomsday cult trying to bring about the "end of everything".