In General
The most recurring enemies in the series, yet also the least threatening. The Dark Hand is a criminal gang based in San Francisco. They shift their focus from regular organized crime to assisting various demons and sorcerers. Things keep going further downhill for them from there.
Valmont 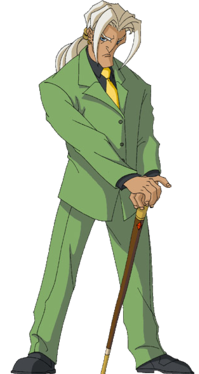 This suit costs more than your life.

Jackie Chan. Finally, we meet. It was nice knowing you.
Voiced by: Julian Sands (Seasons 1 and 2), Andrew Ableson (Seasons 3 and 4), and Thomas Dekker (child)

The wealthy British-born boss of the American crime syndicate, the Dark Hand. He is also the secondary antagonist in Seasons 1 and 2. Eventually he loses leadership over his Enforcers, and is reduced to poverty. 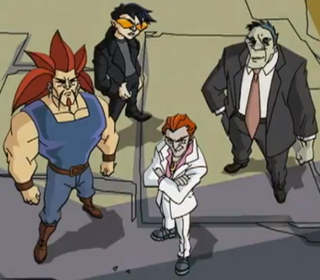 A group of hired thugs. They consist primarily of the main trio of Finn, Ratso, and Chow; and occasionally Hak Foo. Tohru was an Enforcer until his redemption.

Originally they worked for Valmont, and by extension for Shendu. Later in Season 3, they are enslaved by Daolon Wong, who turned them into his new Dark Chi Warriors. Later they work for Tarakudo in Season 4. But in Season 5, when Drago employs them, he turns them down after they fail him once.

Voiced by: Adam Baldwin
Get down! Get funky! It's the seventies!

An Irish-American man wearing a disco suit, and the main trio's de facto leader. Before becoming a thug, he sang in disco bands and at weddings. 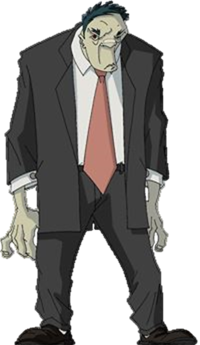 Voiced by: Clancy Brown
We're like superheroes, who steal stuff.

A green-skinned man wearing a formal suit. Before becoming a thug, he studied theoretical physics.

Voiced by: James Sie
Can't you let us have just one little priceless statue?

A Chinese-American man who fancies sunglasses and a black jacket. Before becoming a thug, he was thrice the Employee of the Month at Sun-Shack store. 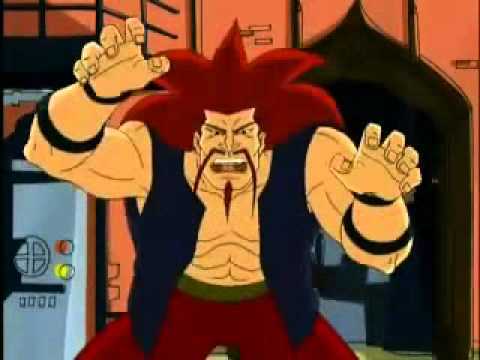 This is his first outfit.

A Chinese martial artist who's constantly trying to prove his strength. He first appeared as a freelancer hired by Valmont in order to retrieve the Pig Talisman during the 1st season. After Tohru leaves the Dark Hand, Hak Foo becomes his replacement. After the Demon Portal quest is over, Hak Foo goes on his own way again, but shows up occasionally.