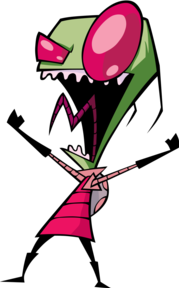 Voiced by: Billy West (pilot only) Richard Steven Horvitz (series)
"I am Zim, and Zim shall rule!"

A pint-sized alien from the planet Irk, with an ego as big as he himself... isn't, Zim is a walking disaster area that somehow remains oblivious to his own shortcomings and the contempt his people hold him in. He thinks he was sent to Earth as an Invader to ready the planet for hostile takeover, but really his leaders were just trying to get rid of him by sending him as far away as possible (they didn't even know there would be a planet there for him to try to conquer). On Earth, he aims to Take Over the World, but is of course continually thwarted, either by his Dib's interference, GIR's stupidity, or his own incompetence. 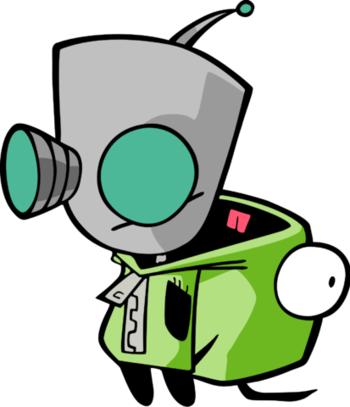 Zim's robot sidekick, on Earth disguised as a dog. Supposedly a "SIR" (Standard-Issue Information Retrieval) unit assigned to all invaders, but GIR is an "advanced" model the Tallest specially gave Zim. And by "advanced", we of course mean "moronic," thanks to having a head literally full of garbage.note To be precise, Tallest Purple's pocket lint. While usually too flighty to be of any consistent help, GIR will now and again go into "Duty Mode," signified by a change of eye-and-panel color from blue to red, and act like a real SIR.

When in "duty mode", GIR switches to a completely different personality: highly intelligent, calculating, and efficient, even moreso than Zim. 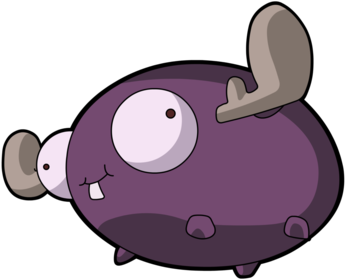 A floating, purple, noseless moose who's Zim's second sidekick. Originally envisioned as Zim's ultimate tool of destruction, whom he created to replace GIR, since the series was cancelled before his debut episode could be finished, he was instead simply retconned as being with Zim "the entire time." Minimoose's actual power is finally showcased in Enter the Florpus where he ends up being crucial to Zim's evil plan.

Two poorly-made robot decoys that pose as Zim's "parents" in order to further his disguise as a human child. 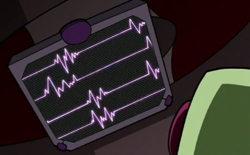 "PROCESSING, PROCESSSING!!"
Voiced by: Jhonen Vasquez
"Something is happening at the front door. Something... horrible!"

The Artificial Intelligence that runs Zim's base. Thoroughly sarcastic and perpetually bored with having to serve his master's whims, and was once possessed by GIR for several months. 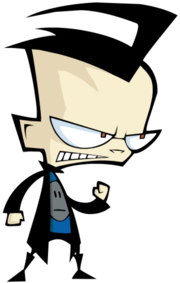 Voiced by: Andy Berman
"My problem is that the human race seems to want to be destroyed!"

A 12-year-old (as of Enter the Florpus) self-styled "paranormal investigator", and one of only two people on Earth (the other being his sister Gaz) to realize Zim's extraterrestrial origin. Dib's goal is to expose paranormal phenomena to the rest of the world, especially his father. However he is regarded as a loon by pretty much everyone, and essentially treated like crap by the very people whose lives he's trying to save. Nonetheless, while he means well, he's fairly ruthless (at times bordering on sadistic) when it comes to dealing with Zim, making them Not So Different from each other. 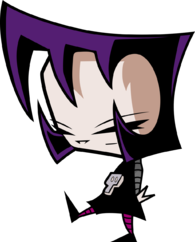 Voiced by: Melissa Fahn
"What you need is to give the Game Slave to me or I will plunge you into a nightmare world from which there is no waking!"
(after getting a negative response): "I hope ya like NIGHTMARE WORLDS!"

Dib's younger sister. Like Dib, she knows Zim's real origin, but unlike him, she doesn't much care, on the grounds that he really isn't very good at the whole world-conquering thing. That, plus she seems to be something of a misanthrope herself. (She did once have a very hard time deciding whether to destroy all life on Earth or not, when putting a can of beans in a super-powered microwave.) Mostly Gaz sticks to her video games and snarks at the insanity around her. 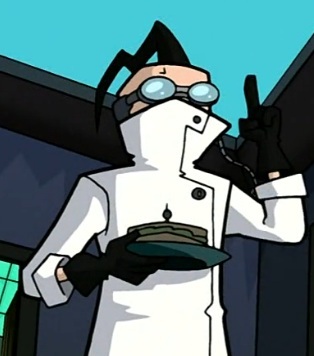 Voiced by: Rodger Bumpass
Friend to the world, enemy of Santa Claus.

The father (at least allegedly) of Dib and Gaz, Membrane is a super scientist who also hosts the Show Within a Show Probing the Membrane of Science. He keeps a very busy schedule, to the point where he can only manage to eat dinner with his children once a year.

In General
The Almighty Tallest 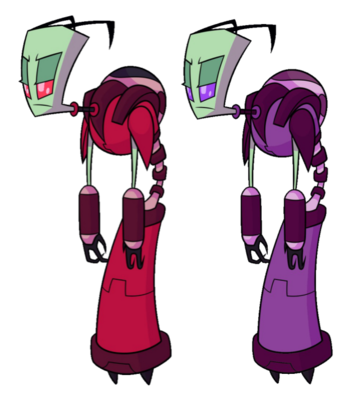 Voiced by: Wally Wingert (Red), Kevin McDonald (Purple)
Red: "The universe will be ours for the taking! It's only a matter of time before all the races of the Universe serve the Irken Empire!"
Purple: "I'll have them serve me the curly fries."

The leaders (or more accurately, figureheads) of Irken society. Their height being the only qualification for office, they're not necessarily well-equipped in the brain department, although Red does seem to have it together more than Purple. Pretty much they sit around snacking and acting like jerks. Their role can be likened to a pair of teenage bullies picking on and ordering around a bunch of smaller kids.

Red and Purple weren't the first Tallest. Some of the previous leaders were slated to appear in flashbacks if the show hadn't been canceled.

One should address the Almighty Tallest respectfully as "My Tallest", the equivalent of "Your Majesty" (or, more appropriately, "Your Highness") on Earth. As a general rule of both grammar and respect, "My Tallest" is never pluralized, even when two Tallest rule in tandem. 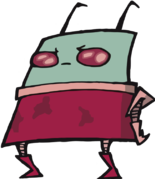 Voiced by: Ted Raimi
"So that no Irken boot has to come in contact with any unsavory alien filth! HOO-HA!"

An incredibly short Invader, and perhaps the closest thing that Zim has to an actual friend. Had the show continued, he would have become a reoccurring character, and lived in Zim's basement. 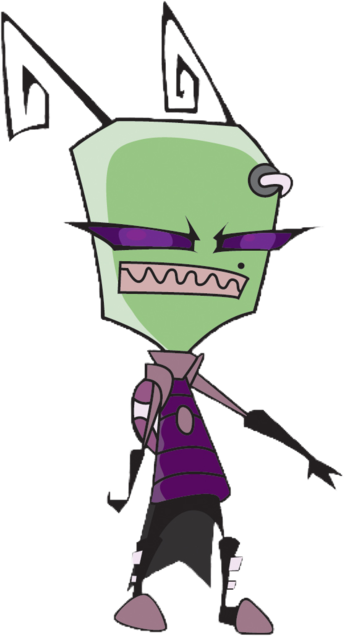 A female Irken out to seek Zim's mission and prove herself as a worthy Invader to the Tallests. Fifty years ago, Zim caused a blackout that caused her to miss her test to become an Irken-Elite. Not to be confused with the main character of another Nick franchise, Tak and the Power of Juju.

The modified Spittle Runner Tak used to make her way to Earth. After she was defeated, Dib keeps it within his family's garage to further modify it and study Irken technology. After being reactivated, however, it's discovered that the ship's autopilot runs on a copy of Tak's personality, and is hesitant to allow anyone but Tak to even sit in itself, let alone pilot it. 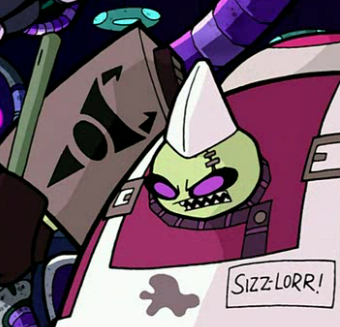 Voiced by: Jim Wise
"Nobody escapes from Sizz-Lorr. I will find you, Zim. I will search all of space's dark corners to hunt you down. AND I WILL FIND YOOOOOUUUUU!!!"

Zim's boss during his exile on Foodcourtia, an Irken frycook who runs Foodcourtia's premier restaurant. After Zim escaped the planet, Sizz-Lorr swore to make him come back if it was the last thing he did.

Vortian Prisoner 777
One of the Vortian military researchers used by the Irken Empire to produce their tech and weaponry, kept as a prisoner. He copes with this by making... interesting design decisions in Irken weapons, and trusting them to Zim, who he knows full well will do something horrible with them. 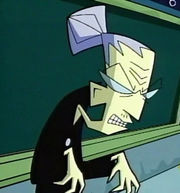 The other kids in the Skool which Zim and Dib attend, which includes Miss Bitters' class. They mostly act like normal kids and have absolutely no idea that Zim's an alien. 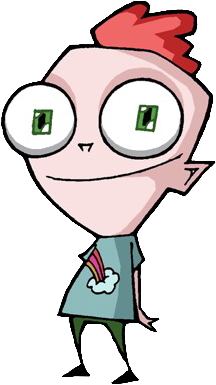 Voiced by: Danny Cooksey
An overly optimistic schoolboy with an abnormal resistance to injury, Keef is the first (and likely only) human Zim attempts to make friends with.
Groyna

A schoolgirl who temporarily teams up with Dib in issue 8 of the comics to investigate the infestation of alien pants Zim has brought to earth. 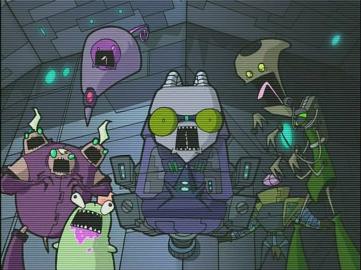 Latecomers to the series, the Resisty are a Ragtag Bunch of Misfits from different planets who banded together to... well, resist the Evil Irken Empire. Led by Lard Nar, a former engineer from Planet Vort.

The Planet-Jackers
Voiced by:Sherman Howard(Oog-Ah) Rob Izenberg(Nik)
"That one's gonna burn real good. Critters Burn good!"
A species of advanced aliens on a planet orbiting a dying sun. To keep their planet safe, they hijack worlds with a massive towing ship and launch them into said sun. Two try to steal Earth, much to Zim's chagrin.
The Nhar-Gh'ok 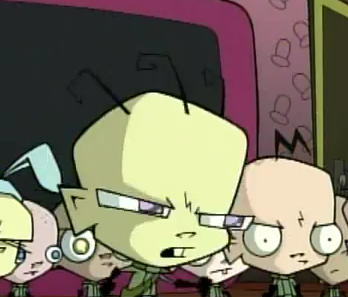 Voiced by: Phil Lamarr (Shnooky)
"We will take your ship! And for the trouble you've caused, we're going to destroy your base, leaving you stranded here. Just like we were."

A race of aliens led by Gorkspace Sergeant Shnooky who were stranded on Earth posing as human babies after an incident in a maternity ward. They attempt to take Zim's ship and use it to fly back to their home planet. It doesn't end well for them.

A pig version of Gaz created by Membrane specifically for the wing of the same name. 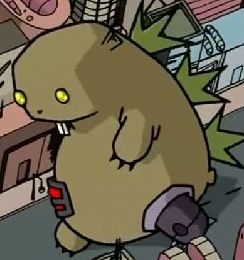 Once an ordinary, adorable hamster Miss Bitters brought in to increase class enthusiasm, Peepi is soon transformed into a seemingly unstoppable creature of destruction by...well, guess who.

Countess Von Verminstrasser
Voiced by:Mindy Sterling
"You dare question me?! Question my methods!? You who stand to benefit the most from my research? You disgust me!"

The extremely paranoid, short tempered, and militant head of the "Delousers" an organization devoted to stopping rapid lice infections. Dib initially thinks she's nuts, but there's more to the issue than meets the eye.

Because Dib's life isn't screwed up enough, his subconscious is a gateway to a dark netherworld, whose inhabitants are grotesquely twisted versions of almost everyone he knows.

A pair of aliens who once captured Zim under the mistaken belief that he was a bona fide human being. Zim ends up escaping them easily because they're both really dumb.

A being from the netherworld who appears every 1,000 years. Before returning home, he has to grant one mortal a wish.

Debuting in Enter the Florpus, Clembrane is a failed clone of Professor Membrane created by Zim in the past as part of an aborted plan to swap him out with the real Membrane and have him ground Dib forever. Zim gave up on him, not because the clone obviously looks, sounds and acts absolutely nothing like the real Professor Membrane, but because the clone couldn't make pudding just the way Dib likes... even though Dib doesn't even like pudding. Nevertheless, Zim does find a use for Clembrane in his plots eventually. 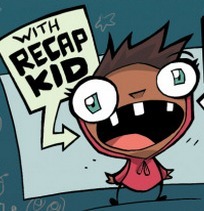 An energetic child that claims to know all things Invader Zim. They appear at the start of every issue of the comics to give the readers a recap of previous events.
Agent Batflaps
A minor recurring character from the comics. A forum poster on Truthshrieker, and something of a rival to Dib in the field of Paranormal investigation. Not in terms of competence, but in his ability to garner respect and clout from the community.
Virooz
Real name Fitzoo-Menga, he's an Arc Villain from the comics, who remotely torments Zim for several issues as part of a larger, mysterious agenda.
Number 1 / Zib 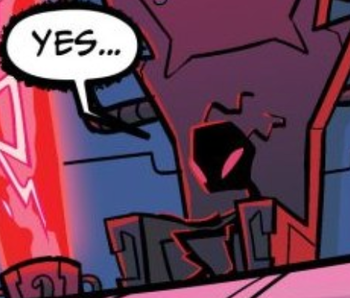 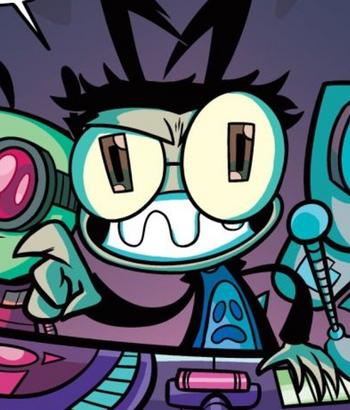 Of the thousands of alternate Zims who ended up trapped in the Zimvoid after passing through Pandora's Quadrangle, this one is considered the best of the best, the ultimate Zim who conquered his Earth and destroyed his enemies. He effectively runs the Pocket Dimension and its contests in order to determine the best of the best.

Turns out he's actually a Dib who killed his Zim and fused his brain with Zim's PAK after modifying it. He apparently created the Zimvoid in order to trick other Zims into uploading his own PAK virus to their respective Irken Armadas so he can destroy them.