Here are the characters of Ikki Tousen. 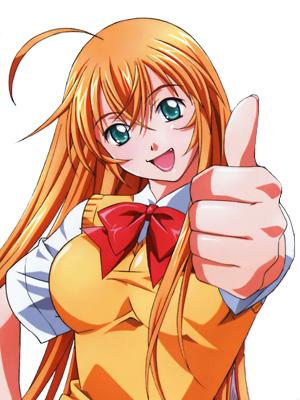 The protagonist. A second-year transfer student at Nanyo, she is not terribly bright, but is immeasurably powerful despite being only a D-ranked fighter. She possesses a unique gift for predicting an enemy's moves very accurately by reading the flow of chi around her opponents, which occasionally makes her seem brighter than she is. For instance, she will put an end to a fight simply by stating the next moves of an opponent with frightening accuracy, breaking his will to fight after he realizes the futility of fighting her. She is also very good at "delayed striking", where she makes a feint attack in order to leave an invisible "chi bomb" which detonates moments later while the enemy's guard is down. She is skilled at "inner striking," which is another chi attack where she sends her chi into a person, causing damage to manifest at unusual places. She also inherited Master Chosho's knowledge of chi magic, and, while currently unaware of this, is able to use it partially by instinct. Chosho passed it to her spiritually while Hakufu was unconscious; this is how she healed Koukin after she stabbed him; she slept with Koukin and extracted the evil chi from his body into her own. She still has the evil chi contained inside her, and it appears on her body as a skull-like mark and is slowly creeping up to her heart. 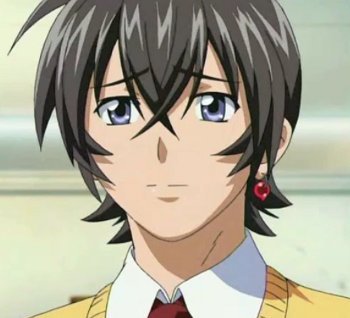 Hakufu's rich cousin and a second-year student at Nanyo Academy. Although only a C-ranked fighter, his lack of confidence and his short resume of victories (or battles for that matter) keep him from becoming A-ranked despite already having the power of one. He has a crush on Hakufu. He is now one of Nanyo's Big Four, taking Kannei's place after he was defeated. 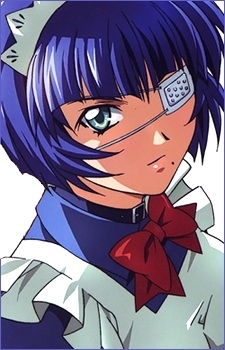 A third-year student at Nanyo Academy. Powerful and a B-rank, she is also one of Nanyo's Big Four. 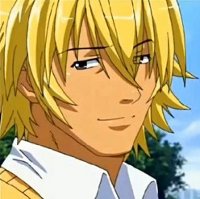 A third-year student at Nanyo Academy. His actual ranking as a fighter is unknown, but in fights he has shown himself to be an A-rank easily. One of his primary goals as Ouin was to remove Totaku from power.

A third-year student at Nanyo Academy, a B-ranked fighter, and one of the Big Four. 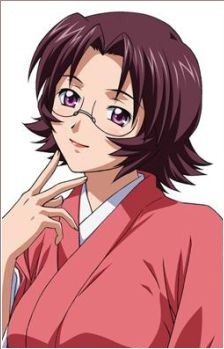 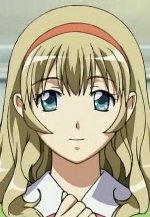 An anime-exclusive character who appears in Great Guardians. She is introduced as the younger sister of Hakufu.

A cute, bespectacled junior at Nanyo Academy who is skilled in making poisons. She has recently joined the Nanyo gang with the intention of helping them beat Sousou.

A long-time friend of Saji and Ryomou. 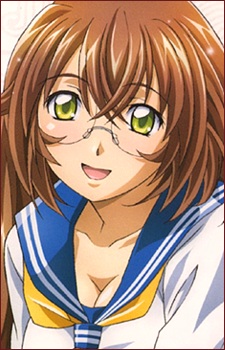 A klutzy, ditzy, bespectacled bookworm with seemingly no combat skills. She is destined to be a great leader, but is presently too timid and carefree to become one. 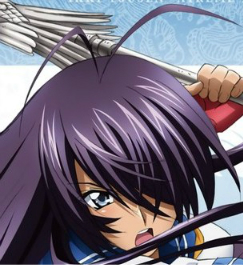 A third-year student at Seito Academy and an A-ranked fighter. Believed to be the most feared and powerful fighter in the Kanto region, she carries the nearly invincible Blue Dragon Crescent Blade from her predecessor as well as the legendary sword Kusanagi, and also has an overwhelming amount of chi. She believes her destiny is to die protecting Ryuubi. 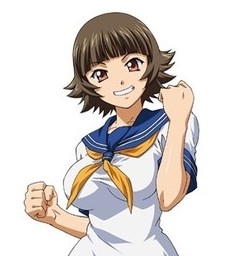 Ryubi's best friend and an avid snack-lover who is a first-year student at Seito Academy. Although quite weak and only a C-ranked fighter, history states that she will one day become so powerful that legends will tell of her matching ten-thousand men (just like Zhang Fei himself), which makes her well-known around town.

A mysterious new girl from Seito High that is presumed to be Seito's "secret weapon". Easily a super A-ranked fighter, she wields one of the Hyakuhekitō swords with extreme efficiency. 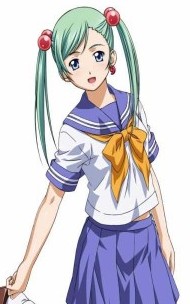 A young girl who appears to harbor a dragon herself.

A monk that worked alongside Genchoku Josho at Tougenin. He is very strong, however, being able to fight off Teni with ease by being able to block and break her blades with his bare hands as well as take a shot by Hyakuhekitō to the shoulder and still be able to subdue Ryomou when her dragon was unleashed. It is implied that he will kill Kakouen, just like his predecessor did 1,800 years ago. 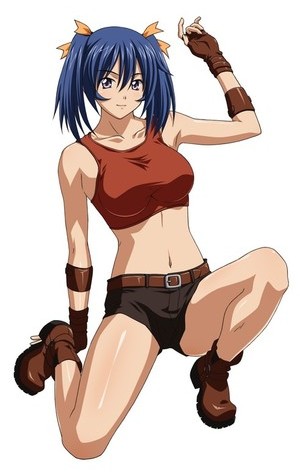 An assassin sent by Koumei to kill Kakuka and frame Kannei of Nanyo for the crime. 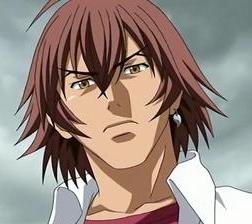 The eccentric leader of Kyosho Academy, best friend to Genjou and Houkou, and a B-ranked fighter.

A fighter known for his love of using only the most basic moves in combat, abhorring (and perhaps being incapable of) any other kind of combat.

A third-year student at Kyosho Academy and the best friend to Sousou and Kakouton. 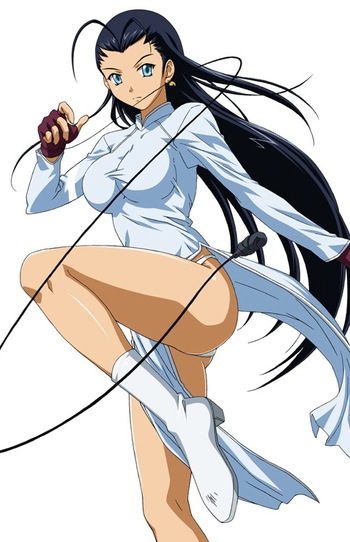 A female assassin Sousou once saved, earning her total loyalty. She is extremely skilled, even more so than Ryofu, and very durable to the point of seemingly not feeling any pain, and specializes in pressure point attacks. 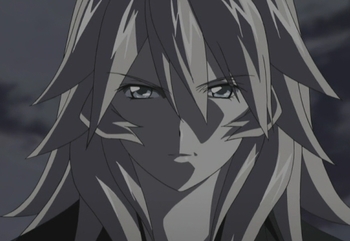 The strategist of Kyosho Academy and arch-nemesis of Koumei. She is paraphelgic, having lost her feet years ago while Teni went on a killing rampage, and uses a wheelchair for mobility. 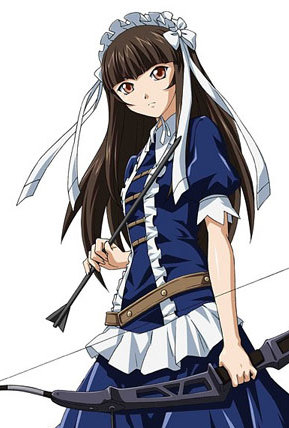 A psychotic powerful archer and assassin barely in her teen years, wearing gothic lolita fashion. She has Catholic beliefs, and believes Shibai to be the Messiah and worships her unquestioningly. 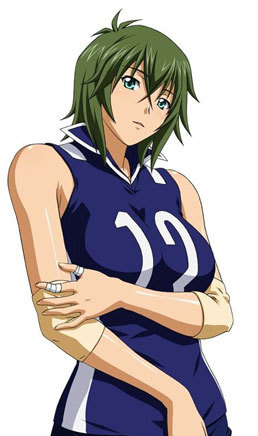 A very tall first-year student at Kyosho Academy and one of Sousou's loyal fighters; she was easily able to block a powerful chi blast from Sousou aimed towards Shibai.

One of Shibai's devoted followers, often seen pushing her wheelchair. He takes over Kaku's place as the strategist, but keeps Kaku in his group. 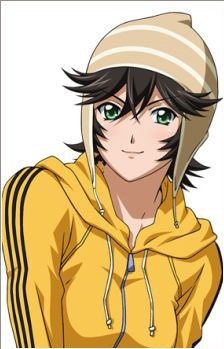 A third-year student at Kyosho Academy who launched an assault on Seito.

The evil leader of Rakuyo High who, until his death, held most of the other schools in a vicegrip, possessing both the manpower and the Gyokuji as well as a Hyakuhekitō. 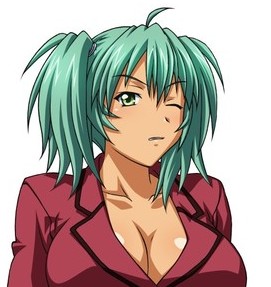 A strong bisexual fighter with a very promiscuous personality and a habit for dressing in skimpy outfits. She was very skilled at making chi blasts, and was in love with both Saji and her best friend Chinkyu. 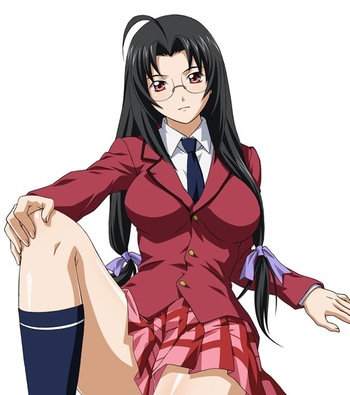 A bespectaled, long raven-haired beauty who was once Totaku's second-in-command. Intelligent, seductive, and manipulative, her power lay in manipulating others into doing her dirty work as she is otherwise an average fighter. 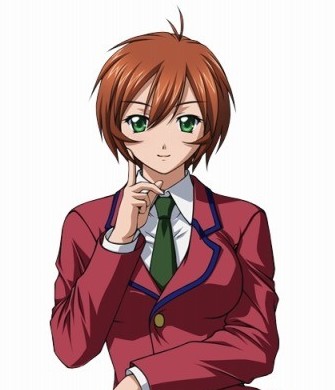 A very close friend to Ryofu. They work on missions together for Totaku to kill Hakufu.

Voiced by: Shizuka Ito
Others 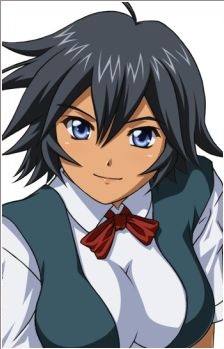 A dark-skinned girl and the leader of Gogun High who is destined by her magmatama to kill Hakufu, as her predecessor did 1800 years ago. 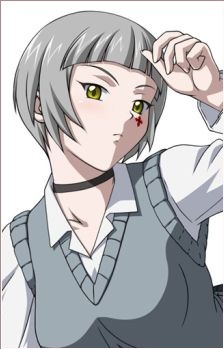 An assassin sent to kill Sousou while he was injured from a gang battle. 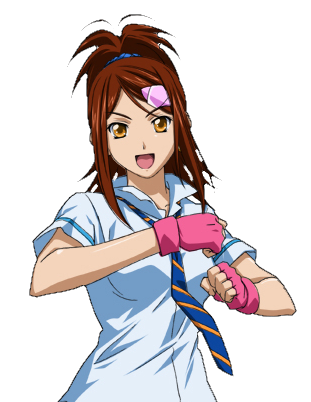 A ditzy, yet very strong fighter. Instead of having a dragon state, she had the actual spirit of Ma Chao kept in her magatama. When Mouki found her friends seriously hurt in an attack, Ma Chao awakened and temporarily took over her body. She became very powerful and violent, much like Hakufu in her dragon state. 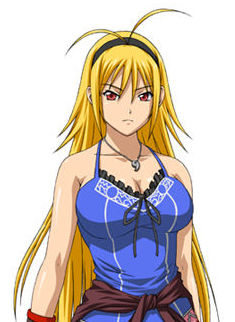 A video game-only character who first appears in the PS2 game Ikki Tousen: Shining Dragon, and is allied with Rakuyo High School.

A skilled and honorable fighter of African descent, sporting dreadlocks and dressing in hip-hop fashion.

A member of the Three Pillared Gods, Kyosho Academy's elite trio of A-ranked fighters. His predecessor had skills that equaled Kanu's 1800 years ago.

Another member of Kyosho's Three Pillared Gods with the ability to read an individual's magatama by French kissing them. 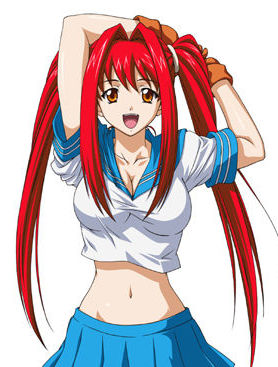 The heroine of Ikki Tousen: Eloquent Fist. She is seemingly a member of Seito, but, like Chousen, she doesn't have a legitimate school home, and is only interested in the Dragon Potent.

An old man who trained Hakufu when she was a child. He is an old friend of Goei, and he possibly trained her too, and has also trained Ukitsu and Rikuson. 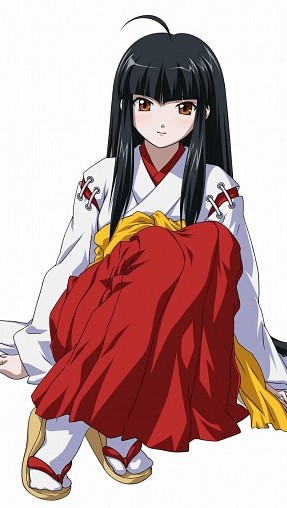 An old woman with the appearance of a young girl, Choshou is in charge of the Hyakukeitō, a set of 5 legendary Chinese jian made of jewels supposedly made by Cao Cao in ancient China. 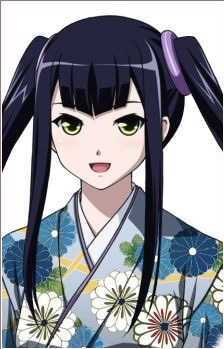 The mysterious woman who first appears in Great Guardians, her face covered with a hood.

The talented doctor living near Hakufu's place. He takes care of her many times when she gets injured after battles.