This is a list of characters from the animated film series: Ice Age, Ice Age 2: The Meltdown, Ice Age 3: Dawn of the Dinosaurs, Ice Age 4: Continental Drift and Ice Age 5: Collision Course.

A group of unlikely prehistoric animals who wind up becoming a tight-knit community. 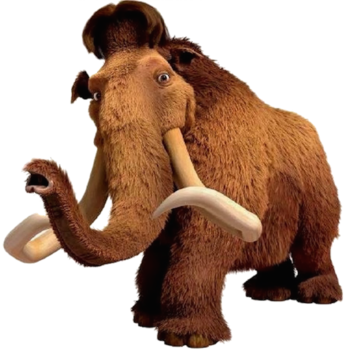 A mammoth whose full name is Manfred; Manny is introduced in the first film as anti-social and uncaring to those around him but he gets better and eventually becomes quite friendly and kind if not a total killjoy. 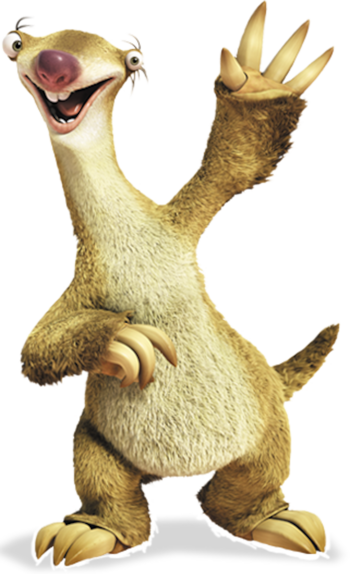 A sloth who is the 'Gooey Stuff' that keeps the herd together. He is portrayed as clumsy, fast-talking, and unpopular; and is voiced with a lateral lisp. Also self-dubs himself 'Lord of the Flame' after he learns to create fire in the first film. 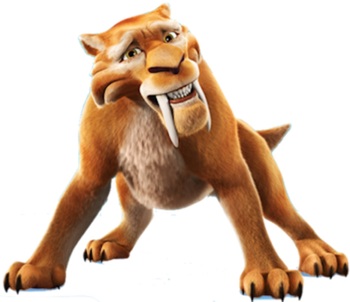 A smilodon who is the only carnivore of the group. Has a somewhat sarcastic personality, although it's usually not intended as malicious. He was a bad guy in the first film but after bonding with Manny and Sid he inevitably did a Heel–Face Turn.

Introduced in The Meltdown 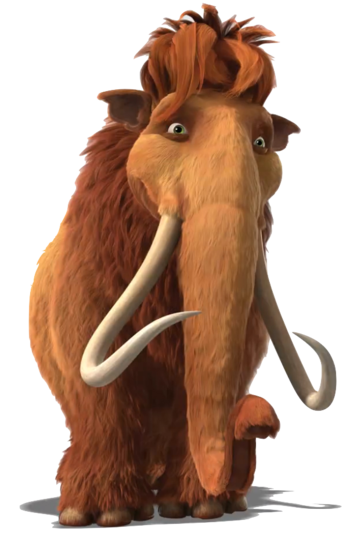 A female woolly mammoth, whom Manny, Diego, and Sid meet during their migration to escape the flood in the second movie, Ice Age: The Meltdown. She serves as a Love Interest to Manny. 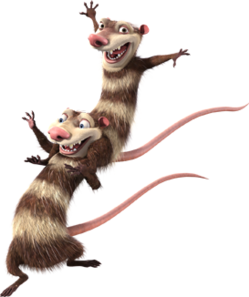 Twin possum brothers who become new protagonists in the second film. Adopted brothers of Ellie the mammoth, they cared for her and taught her to hang by her tail from a tree branch when she slept, as they did. They are usually portrayed as the comic reliefs of the group.

Introduced in Dawn of the Dinosaurs 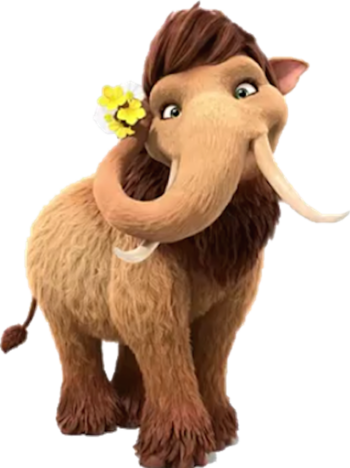 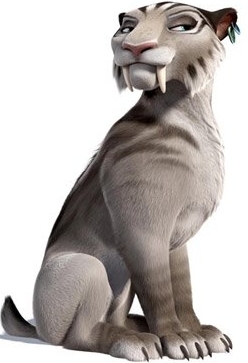 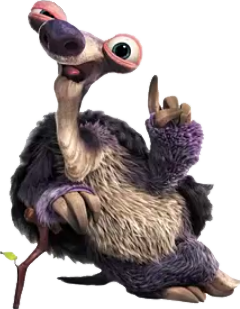 Voiced by: Wanda Sykes
Sid's grandmother. She's rather nutty, and also shows horrendously bad personal hygiene. The rest of Sid's family searched for him with the only purpose to dump her with him then scram. When she disappears early in the film only to later be found "stowing away" on the Herd's little "boat", they have no choice but to take her with them. Has an imaginary pet called Precious. Who turns out to be real.
Louis

A teen molehog who has befriended Peaches by the time the film starts. Has a pretty obvious crush on Peaches, but lacks much self-confidence in himself, and is thus easily intimidated. 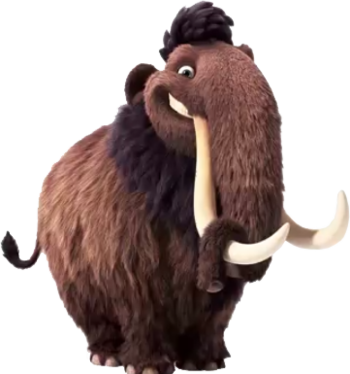 Julian is a young and easygoing, fun loving mammoth who is Peaches' fiance. After they get married, their plan is to venture on their own which doesn't make him very popular with Manny and Ellie. 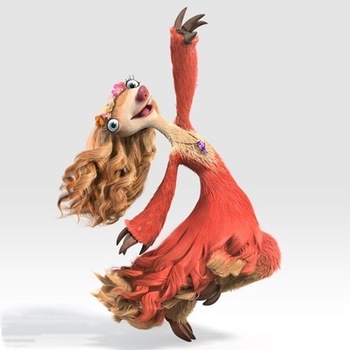 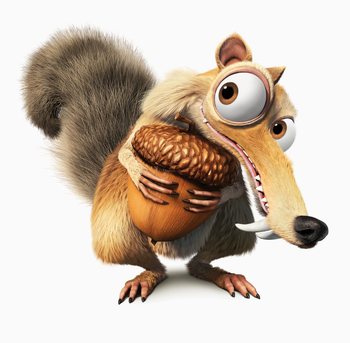 A squirrel who shows up in the beginning before the opening credits, right after the end before the closing credits, a couple of scenes in between, and headlining follow-up short-subject films. Oh, and every single ad for every movie. 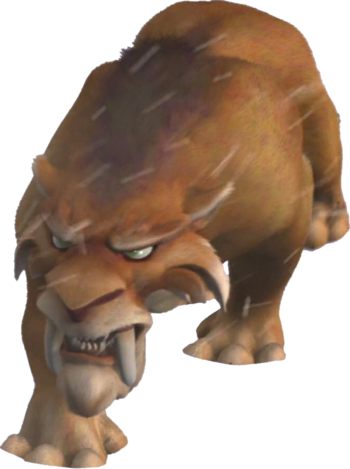 The deadly and dangerous leader of a pack of saber-toothed cats, Soto wanted to eat baby Roshan A.K.A 'Pinkie' in vengeance for the murders of several of his pack-mates. He is the main antagonist in the first film. 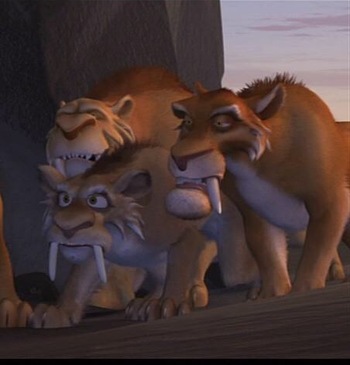 The other three sabers from Soto's pack. 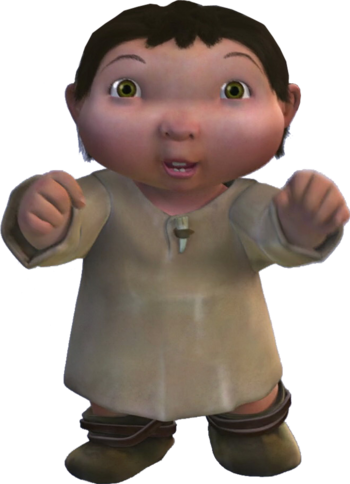 The baby that Manfred, Sid and Diego return to his father.

Voiced by: Cedric the Entertainer (Carl) and Stephen Root (Frank)

angry at Sid for ruining a dandelion they were going to eat.

Prehistoric animals that are featured in the first movie.

Characters introduced in The Meltdown 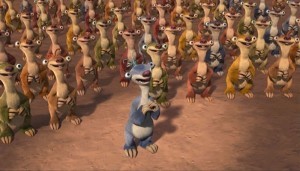 A tribe of miniature sloths that appear to worships Sid. 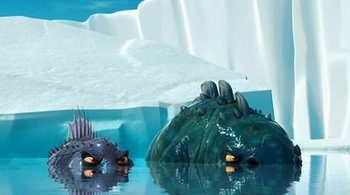 The main antagonists of Meltdown. 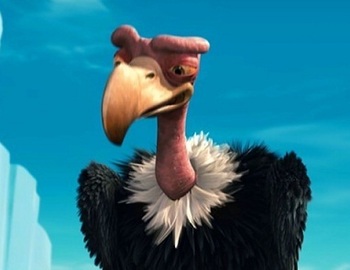 Voiced by: Will Arnett.

A vulture that warns the prehistoric animals about the meltdown.

Characters introduced in Dawn of the Dinosaurs 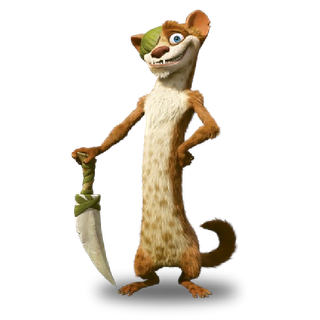 A weasel that makes an appearance in the third film and is one of the new protagonists. He is missing his right eye and wears a leaf as an impromptu eyepatch, and is slightly insane. 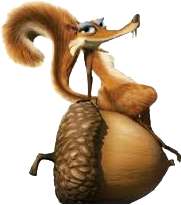 Scratte {pronounced "Scrat-tae" in the trailers} is a female sabre-toothed squirrel that makes her debut in the third film. She is seen in the second trailer with Scrat battling with her for the acorn by propelling themselves down a gorge to reach the fallen acorn, and succeeding. Scratte is also seen as a Love Interest for Scrat. Throughout numerous conflicts, the two fall in love, but Scrat ultimately returns to his old ways. At the end of the film, Scratte is left in the dinosaurs' jungle while Scrat returns back to the surface. 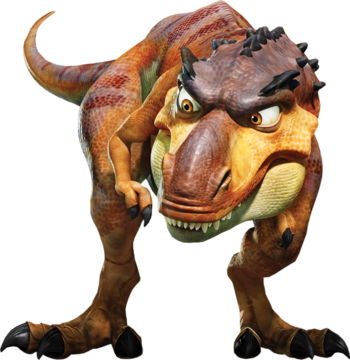 Momma Dino, known also as simply Momma was a female Tyrannosaurus rex that abducted the ground sloth Sid from his herd when he took her eggs, only to raise them alongside the sloth further on. 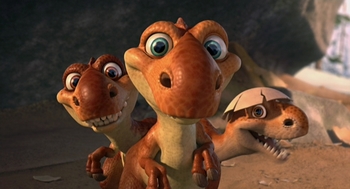 The three baby dinos named Egbert, Shelly and Yoko are baby tyrannosaurus rexs which were adopted by Sid, a Ground Sloth. They are all voiced by director Carlos Saldanha. Sid stole the eggs from their mother (having found them alone, thinking they were abandoned) and hatched them himself . He was later taken away by Momma, their mother, for stealing her children. After being raised by Sid, they have an unusual behavior as a result of not being brought up by a dinosaur such as mimicking Sid and dancing. 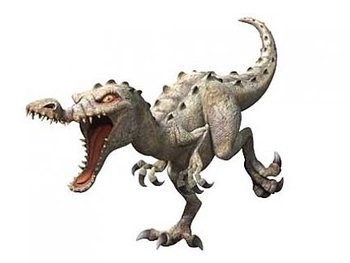 A gigantic albino Baryonyx who is feared by all the creatures in the valley except Buck. 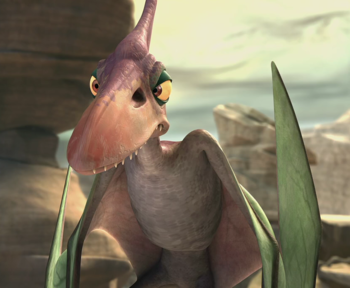 A pterosaur that Buck uses in the climax. 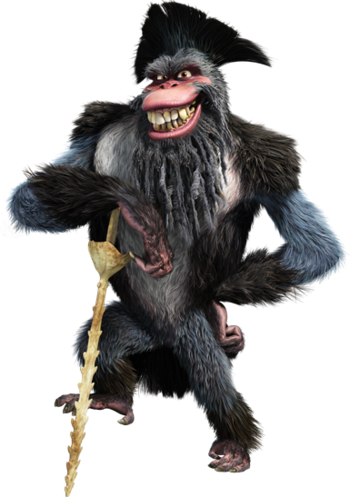 Captain of the pirate crew that are the Herd's main foes in the 4th movie.

Bizarre sea monsters that take on the form of what you love most and try to tempt you into their clutches. Their true form resembles a mudskipper fish or a primitive amphibian.

A group of ground sloth who are related to Sid. Initially only mentioned in the first movie, they make a surprise apparence in Continental Drift, where they dump Sid's Granny off with him under the guise of "missing" Sid. 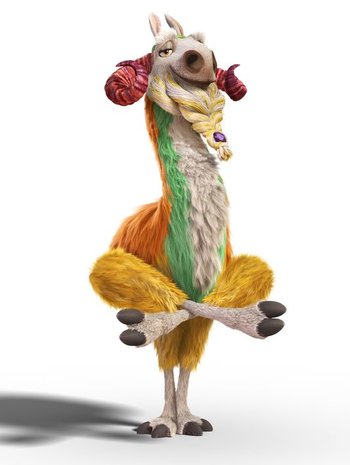 An eccentric llama and the spiritual leader of Geotopia.

Voiced by: Michael Strahan
A fearless and fun-loving rabbit who serves as a "tour guide" to visitors of Geotopia and gets into a relationship with Granny.
Neil de Buck Weasel 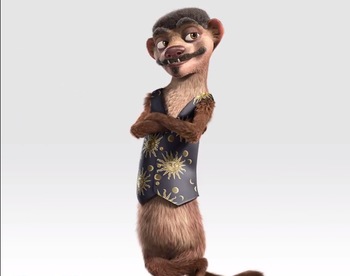 An astronomer weasel who exists within Buck's mind and indirectly helps the Herd in searching for a way to stop the coming "extinction". He also acts as the Narrator of the entire film and is a Fourth-Wall Observer. 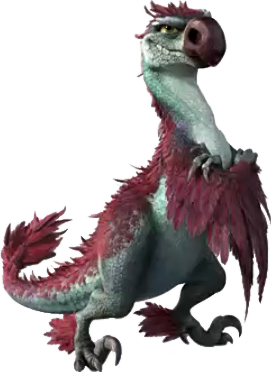 A conniving and underhanded flying dromaeosaur who leads a group of egg-thieves consisting of himself, his daughter Gertie, and son Roger. He holds an intense hatred for Buck for repeatedly thwarting his family's escapades and attempts to get revenge on him by trying to thwart the Herd's attempt at diverting the asteroid. 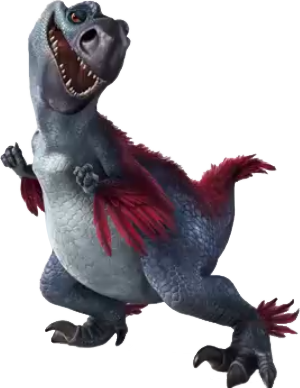 A bulky female dromaeosaur and Gavin's daughter who faithfully follows and supports her father's schemes while abusing her younger brother Roger. 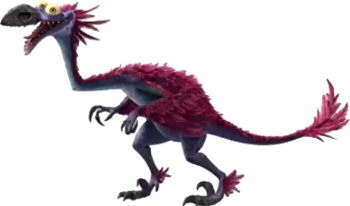 A spindly and neurotic male dromaeosaur and Gavin's son who is seen as a disappointment by his father. 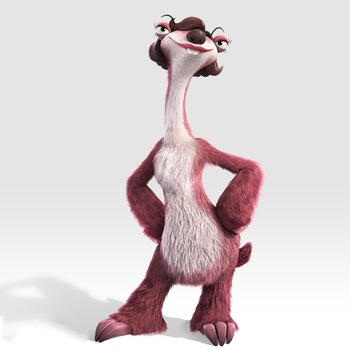 A female ground sloth who went on a single, painfully brief date with Sid.