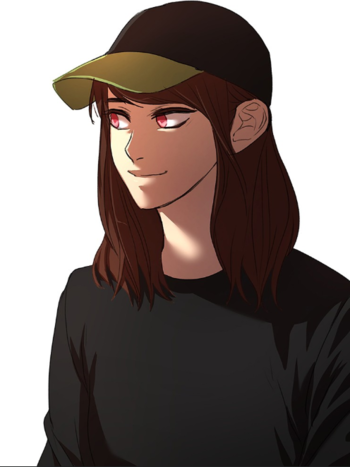 The main character of the story. She comes from a poor family, but nonetheless tries all ethical means she can in order to overcome her current difficulties, all while struggling from the trauma of her childhood. Due to her circumstances, she eventually became rather introverted (but still had two close friends). This may change now since the Hirahara siblings are becoming increasingly involved with her.

Shin-Ae: I don't have enough boob for this dress! I bet her single boob would still be bigger than both mine combined!
Mrs. Hirahara: ''[Talking to Shin-Ae at the dining table] So the issue you have with the dress...It must be the cup size then? You can’t be an A can you? Or AA? Or worse AAA?
Shin-Ae:Aww sh#t. My stomach! It’s hurting like heck! I’m so gassy right now! I knew those leftovers smelled fishy this morning! I don't think I can hold it anymore. I-it isn't strong enough...My ass is going to explode!
Shin-Ae: I just wanted my old life back.
Shin-ae: Finally, I get to have some fun.
Mrs. Hirahara: What do you think son? Doesn’t she look cute?...Instead of a girl wearing a sexy dress...You get a girl wearing your shirt for your birthday!
Shin-Ae:...anti-derivatives...indefinite integrals...
Advertisement:
Yeong-Gi "Nol" Hirahara 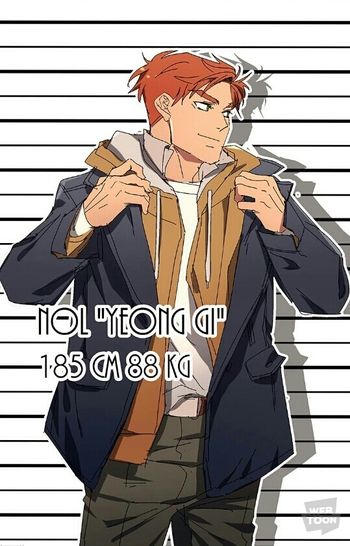 Introduced as one of the friends of the guy Shin-Ae rejected, and ends up getting her drink thrown at him (accidentally). They meet again at a party, where Yeong-Gi helps Shin-Ae get back at her friends with a prank.

Yeong-gi: You okay there, miss? Need some help?
Shin-Ae: I just wanna leave this place!
Yeong-gi: I'll give you a ride...wait
Jayce: [After Kousuke asks how Yeong-Gi is doing with work] He already completed all of Sang-Chuls work[...] I reviewed the work he's done but he’s been very thorough so far[...] But if he does manage to keep this up he'll catch up to you in no time. He might even give you a run for your money and take the company!
Dieter: I know how he can get annoying. That guy doesn't give up easily once he sets his mind on something.
Shin-Ae: [deadpan] Yeah...I noticed.
Kousuke: Would you like me to order you some tea?
Yeong-Gi: Is that supposed to be a joke? You know how much I hate that stuff...
Shin-Ae: [looking over Yeong-Gi’s mathwork] What the..My god...His handwriting is terrible! You can barely read it!
Yeong-Gi: Oh come on Soushi you should know your formulas by now. It’s an integral part of calculus
Shin-Ae: Did you just...
Soushi: Can you not…?
Yeong-Gi: Not what? Speak? You want me to limit what I say???
Shin-Ae: [throws book] Get out!
Yeong-Gi: I exorcise quite often. And I’m still Yeong...get it??? Get it..cause my name..
Shin-Ae: Oh my god. I’m blocking your phone number.
Megan: [after seeing Yeong-Gi in the office] Ehe. You know...you kinda look like a less scary baby version of the chairman.
Shin-ae: What are you laughing at??? I'll get you back for that spiny shell!!!
Yeong-Gi: I’ve never seen a girl get so worked up over a game like you! I find it funny...In a cute way.
Kousuke Hirahara 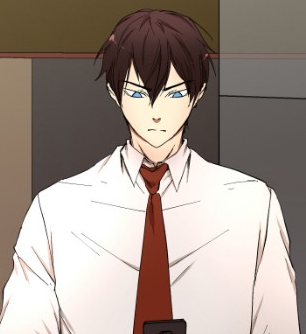 At the party Shin-Ae tried to avoid Nol, and tried to shake him off. When she tried to grab the last tiramisu she was beaten to it by Kousuke, which prompted a very petty and childish conflict between them. He was later revealed to be Nol's brother.

Mrs. Hirahara: Oh my goodness! Son, where are your manners?! Staring at a young lady's chest??? I thought I raised you better than this!
Shin-Ae: [Cover her chest] What the heck bro getcho dirty eyes off my chest!
Mrs. Hirahara: I’m just teasing! I know my son. He won’t oogle at women’s breasts...He’s more of a derriere kind of guy.
Shin-Ae: What?!?!
Yeong-Gi: Keep up those snide remarks and my punching bag won’t be necessary. I’ve got my temporary replacement.
Kousuke: Is that a threat?
Shin-Ae: [after seeing Kousuke staring glumly at his food] No way...don't tell me you've never eaten a hamburger before. First it's the ricecakes. Now it's the hamburgers. Seriously???
Yeong-Gi: Just let him eat it the way he wants. He’s always been prim and proper. He won't do it.
Shin-ae: As if you're one to talk! You’re always scowling! You're even scowling right now.
Kousuke: [angry] This is my natural face.
Kousuke: You don’t like it?
Shin-Ae: Nah
Kousuke: Such a shame. I recommend you get your tongue checked[...] I'm only worried about you health. I have never met a single who has not enjoyed cake. It is quite concerning. 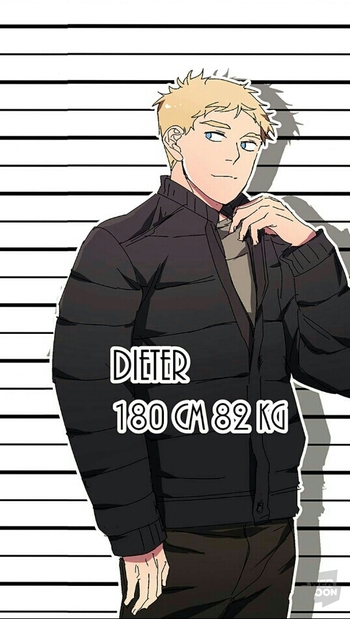 Yeong-Gi's friend and Shin-Ae's classmate whose Love Confession to her kick off the plot. 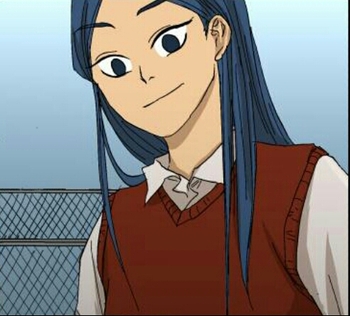 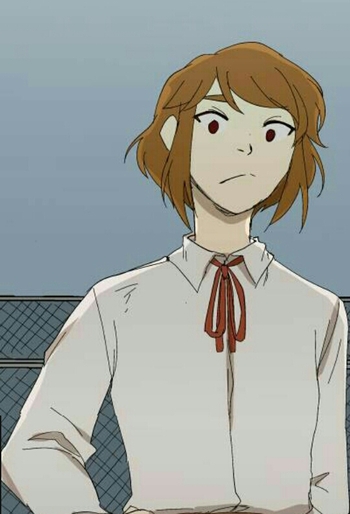 One of Shin-Ae's best friend 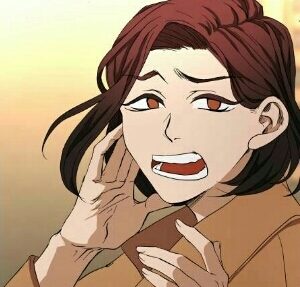 Alyssa's sister and Kousuke's most prominent admirer (much to his annoyance). 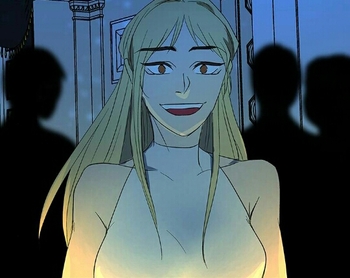 Yeong-Gi's current girlfriend who made her debut as a pop idol. She was also Shin-Ae's old friend. 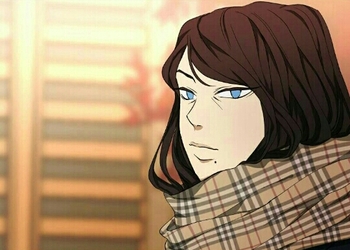 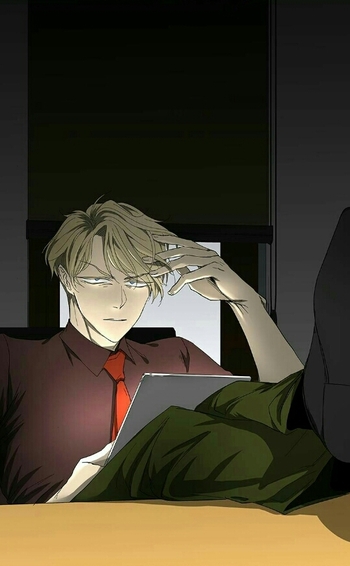 A high-ranking employee of the Hirahara corporation. 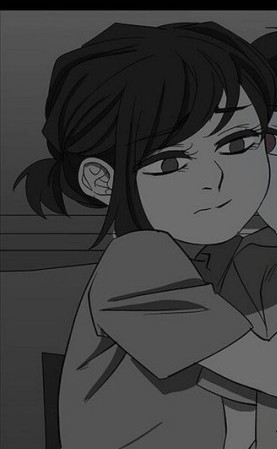 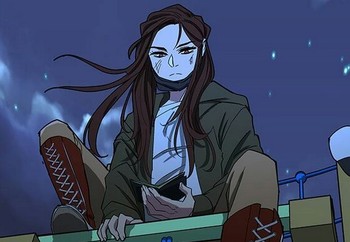 Shin-Ae's older sister who got separated from her since their parents' divorce. She recently surfaced when Shin-Ae discovered her breaking into Shin-Ae and their father's apartment.

A mysterious woman with an unknown relationship to Kousuke and the Hiraharas.