The main heroes of the game. Some of them come from this version of Hyrule, while others hail from across the ages, but they are all united in their effort to defend their land, no matter the era. 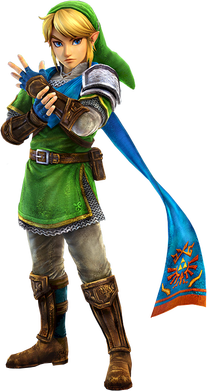 A young recruit in Hyrule's Army who possesses the Triforce of Courage. He is unknowingly brought into the center of the incoming conflict when the past lives he shared with the Princess draws the ire of the witch Cia.

Despite being available from the start, with his trusty Hylian Sword, he will eventually unlock and be able to use an additional six weapons, including the legendary Master Sword, a Magic Rod, a Great Fairy, the Gauntlets, his steed Epona, and the Spinner. This gives Link the highest weapon loadout of all the playable warriors, and a weapon of almost every element in the game.
Zelda 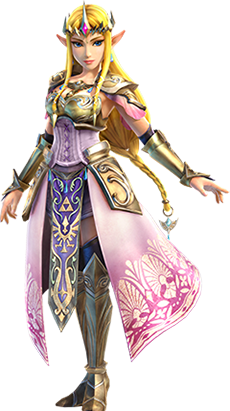 The Princess of Hyrule, who bears the Triforce of Wisdom. Foreseeing the signs of the impending war, she bravely leads her army to face the incoming darkness.

In both the original game and Legends, she is unlocked by clearing the Era of the Hero of Time, Era of Twilight, and Era of Skyloft scenarios in Legend Mode.

Zelda has three weapon loadouts. The first is the Rapier which utilizes both quick sword attacks and the light arrows, and is unsurprisingly Light elemental. The second weapon is the Baton, which lets Zelda utilize magic music and which also controls wind and lightning (the latter being the weapon's element). The third weapon is the Dominion Rod, a weapon which summons and controls statues to assist Zelda in battle, one at a time, and which, surprisingly, is Dark elemental.

The Commanding Officer of the Hyrule Imperial Guard, and vassal and attendant to Princess Zelda. Impa works tirelessly as a loyal servant to her liege as her family has before her.

She is unlocked by clearing the very first scenario in Legend Mode in both the original game and in Legends.

Impa has two weapon loadouts; depending on your choice, she will smash enemies in using the Water elemental Giant Blade, or smack them around with the Fire elemental Naginata. 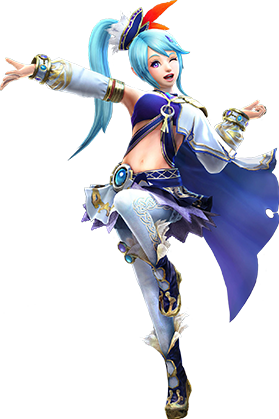 An energetic and straightforward witch who hails from the same mysterious tribe as Cia. She personally leads a regimen of soldiers into Faron Woods in order to counter the onslaught of Cia's army. She is knowledgeable about spells, monsters, and using spells on monsters.

In both the original game and Legends, she is unlocked by clearing the third scenario in Legend Mode.

Lana has three weapon loadouts: The first weapon is the Book of Sorcery, which lets her create magical barriers and cast lightning spells. The second is the Spear which, contrary to it's name, is more of a staff that let's Lana summon the Deku Tree and the sprouts and also assail enemies with water magic. The last weapon is the Fire elemental Summoning Gate, which allows Lana to summon and control the various bosses in the game, as well as a giant Cucco.

In both the original game and Legends, she is unlocked by clearing the second scenario in Legend Mode.

Sheik can only use one weapon: the Goddess Harp. Packing lots of Kunai as well, the Goddess Harp allows Sheik to play the various Ocarina of Time songs to utilize various elemental attacks, yet the weapon deals damage of the Lightning element only, which is also the Goddess Harp's element. 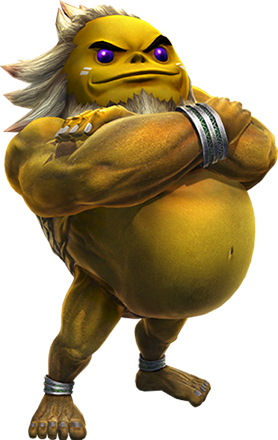 The Chief of the Gorons of Death Mountain, Sage of Fire, and the holder of the Goron Ruby. When the Gate of Souls draws Death Mountain from the Era of the Hero of Time, Darunia and his Goron brothers come into conflict with Zelda's forces under mysterious circumstances.

In both the original game and Legends, he is unlocked after clearing the first scenario of the Era of the Hero of Time part in Legend Mode.

Darunia enters battle using a big Hammer, and he also makes use of his fists, the elemental power of fire, and the iconic Goron roll. 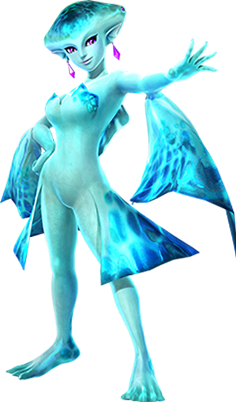 The proud and defiant Princess of Zora's Domain, Sage of Water, and the holder of the Zora Sapphire. When the Gate of Souls connects the Era of the Hero of Time, she comes to the aid of Sheik and Impa after they save her from the machinations of Zelda's mysterious doppelganger.

She takes up Zelda's role in certain story missions, should either Zelda or Sheik be selected. Less often, she'll take up Darunia's role as well.

In both the original game and Legends, she is unlocked as a playable character via an area on the original Adventure Map that unlocks after clearing the Era of the Hero of Time in the main story.

Ruto uses a Zora Scale as a spell component, along with ballet dancing, in order to utilize powerful water magic. 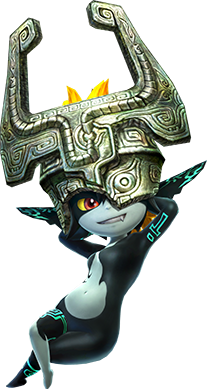 The haughty Princess of the Twilight Realm. When the Twilight Era was connected by the Gate of Souls, she wandered away from her palace and was cursed into the form of an imp once again by Cia. She leads an army of monsters in search for the witch, with the intent to force her to break the enchantment.

In both the original game and Legends, she is unlocked after clearing the first scenario of the Era of Twilight part of Legend Mode.

Her weapon is the Shackle which she binds her hair with, which she uses as a way to focus her dark magic. With it, she can to utilize her hair as a weapon, create dark energy balls of Twili Magic, and summon Twili Wolves to aid her in battle.

An odd, but kind ten-year-old girl going by the self-proclaimed title of the Princess of Insects who wandered into the battlefield from the Twilight Era. When she came under attack from the Dark Forces, she was saved by Lana; in her gratitude, she gives her a Goddess Butterfly to lead her to the Gate of Souls.

She mostly exists to take Midna's place during certain story missions, should Midna be selected instead of the recommended character in Legend Mode.

In both the original game and Legends, she is unlocked as a playable character on the original Adventure Map in an area that unlocks after beating the Era of Twilight in the main story.

Agitha's weapon is the Parasol. While she does use it to strike enemies, she will also utilize the various bugs she has collected, including Light-elemental butterflies and a Lightning-charged beetle. Her weapon is considered Light for purposes of elemental damage. 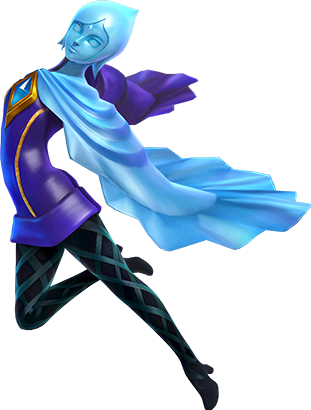 A servant of the Goddess Hylia from the Era of the Sky and the personification of the legendary Goddess Sword, which eventually became the Master Sword. When the Era of the Sky is connected through Cia's portals, Link awakens her and she pledges to aid the young hero.

While she can take up Impa's role in a number of story missions, this is not her only purpose, and she is playable in many of the missions.

In both the original game and Legends, she is unlocked after clearing the first scenario of the Era of Skyloft part in Legend Mode.

Fi's weapon is fittingly enough herself, since she's the titular Goddess Sword. Using the power of Light, she utilizes both her dance moves and her sword form to decimate enemies on the battlefield.