The characters who made their playable debut in Legends for the Nintendo 3DS. They're also DLC in the Wii U version, either downloaded through a code included with Legends or bought separately in the "Legends Character Pack" alongside Ganondorf's Trident, but they do not have any associated story missions, Adventure maps, or weapon unlocks for that version.

All of their alternate outfits are Legends and Definitive Edition-only. 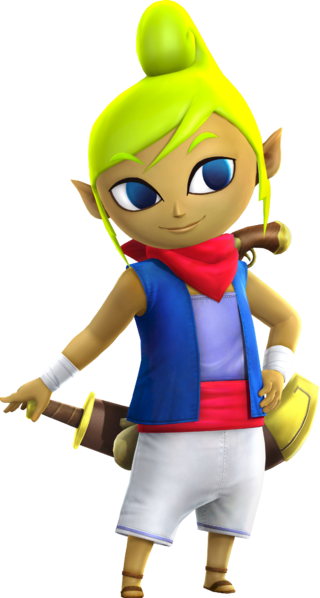 The incarnation of Princess Zelda from the Era of the Great Sea. Without a kingdom to rule or even the knowledge of her royal heritage, she wanders the seas as the captain of a crew of pirates in search of treasure.

Tetra's weapon is the Cutlass. This weapon also comes with a pistol that she uses to fire water blasts and scalding water, and she has some magical skill with the water element as well. 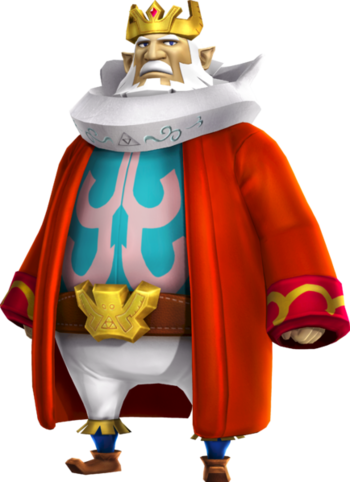 The reigning King of Hyrule from the Era Without a Hero. In his time, Link was not reborn, so in order to protect his kingdom from Ganondorf's wrath, he sealed it and himself under The Great Flood.

Harkening back to his time as the King of Red Lions, King Daphnes's weapon is the Sail, using it as a bludgeoning tool and as a focus for his magic. The magic bestowed onto his bloodline lets him summon forth wind and water and even transform back into the King of Red Lions to ram into enemies as a boat.

Weapons: Light Swordnote light as in weight and the element, Sand Wand (DLC) 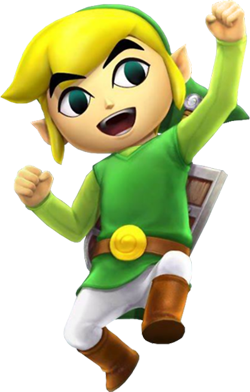 The incarnation of the Hero's Spirit from the Era of the Great Sea. When his little sister was kidnapped by the Helmaroc King, he embarked on a quest to save her and in the process awoke to his destiny as the new hero of Hyrule. He would later go on to rescue Tetra and the Ocean King from the parasitic Bellum, and another incarnation with his same appearance would save the new Hyrule from Malladus.

Unlike Tetra and King Daphnes, he is not playable in Legends's Legend Mode, and must be found and unlocked on the original Adventure Map instead on one of the initially available missions.

His default weapon is the Light-elemental Light Sword, for which he utilizes various acrobatics as well as spin attacks to get an edge on the battlefield. His secondary weapon, introduced in the Phantom Hourglass & Spirit Tracks DLC pack, is the Fire-elemental Sand Wand from the latter game, which he uses to bombard enemies with blocks of sand and even summon the Spirit Train for fiery ram attacks and explosive cannon blasts. This makes him the only Adventure Mode unlockable character, and the only side character in Hyrule Warriors to get a choice of multiple weapons. 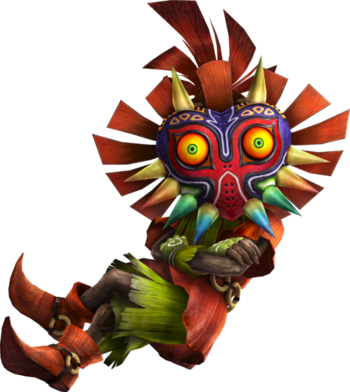 A mischievous creature from The Lost Woods that came into possession of the wicked Majora's Mask. Taken over by its terrible power, he wreaked havoc all over the land of Termina until he was stopped by (Young) Link during the Era of the Hero of Time.

In the original Wii U version of the game, he appears alongside his fairy companions, Tatl and Tael, and the Moon as part of an attack from Young Link in his Fierce Deity form before being made playable proper (though he still appears in said attack even after being made playable).

In Legends, he is unlocked as a playable character in an area on the original Adventure Map that unlocks after clearing the Era of the Hero of Time in the main story.

He uses an Ocarina as his weapon. With it, he gives orders to the fairies Tatl and Tael to batter his opponents. He can also make use of a trumpet to summon and command a puppet and make use of the dark magic residing in Majora's Mask for some devastating magic attacks.

A young girl with a rather uncanny resemblance to a certain legendary hero and hailing from a farm village renowned for their Cucco raising skills, Linkle sets out from her quiet village life and embarks on an adventure to become like the legendary heroes of Hyrule. Her weapon set was inspired by the Twilight Princess Spin-Off game, Link's Crossbow Training.

In her debut game, Hyrule Warriors Legends, she (along with her story) is unlocked after the third scenario of the Prologue part of Legend Mode. She is available by default in Definitive Edition.

She enters battle wielding two Crossbows, from which she can fire a hail of normal arrows, or the explosive bomb arrows. She can also kick enemies at close range, and can augment her kicks with the fire element. The Link's Awakening DLC pack also gives her Boots, allowing her to deliver lightning-fast kicks to her opponents, sometimes literally.