Our heroine (for once) ladies and gentlemen.

Planeptune's CPU. As loud-mouthed and direct as always, it's usually her stunts that drag in others. She's... a little annoyed at having the title of "main character" taken from her for this game.

A haughty and noble lady, Sango drove her city to a state of utter chaos, presiding over a huge civil war between three factions. 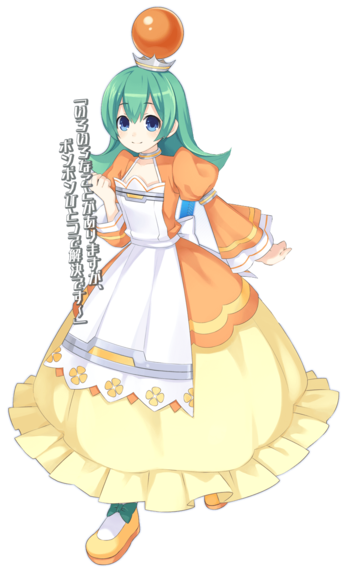 A slow-talking and slow-moving girl, Poona is all about the bonbon on her head, which serves as her main attack method and her "rights". For whatever reason, though, she has to constantly sell her "rights", or her city gets crushed by them. 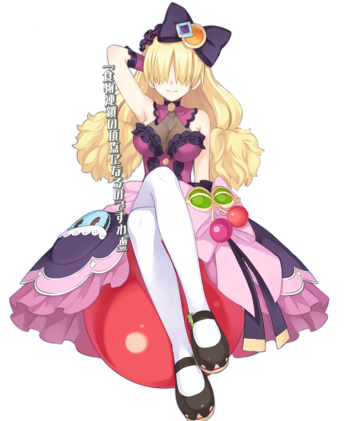 (One of) the oldest Gamarket generals, Lady Wac has very little ambition beyond eating things, which leads to friction between her and the CPUs, especially if they want something from her.

A Leanbox general, Ai acts like a stereotypical newbie idol - loud, shouty, and vaguely off-key. Despite this exterior, though, she has a manipulative side that can raise a lot of trouble for her opponents... assuming she even manages to pull it off.

Voiced by: Ayaka Suwa (Japanese), Stephanie Sheh (English)
Saori: I dislike you more than anyone! I! HATE! YOUR! GUTS!

A general revered as a saint in her city. Shortly after the Sharicite incident, she was locked up in her city's jail for her city's safety.

The Player (aka Secretary)

You. Just arriving in Lastation, seeking a job at the same time as Noire's fiddling around with the Sharicite, you end up helping Noire out at a very critical juncture, and get hired as her personal secretary.

A sage/fortuneteller who claims to have knowledge of long-forgotten lore, and kicks off the main plot with her "help". Her true motives are unknown, and appears to be moving around Gamarket, meeting with all the generals...