Characters / How to Train Your Dragon Films - Other Dragons

Dragons who have no specific allegiance or affiliation. 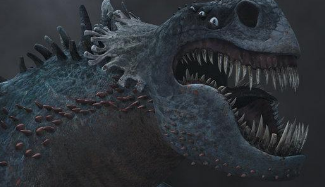 A massive dragon who ruled the nest of the dragons raiding the Hooligan village. It forces them to bring it food, and if any them fail to bring enough to satisfy it, it eats them.

Originally a baby Typhoomerang (a then-unknown dragon species) that Hiccup discovers, he eventually returns to his mother after a short misunderstanding. He later returns in "Zippleback Down", fully grown. 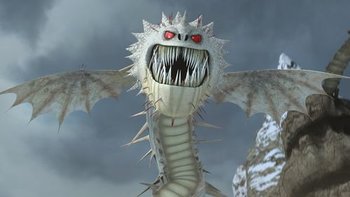 An offshoot of the Whispering Death, the Screaming Death is five times the size and proportionately dangerous. It gets its name from its dragon-disorienting scream, specifically coined by Tuffnut. And this dragon is a complete unknown, with no entry into the Book of Dragons. 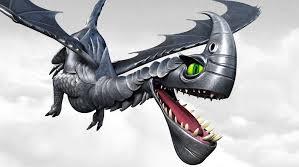 Introduced: "Have Dragon will Travel, part 1"

Heather's Razorwhip dragon. She is a sharp class and has a lot in common with Deadly Nadders including throwing tail spikes, but looks a lot sleeker and seems to have a coating of metal all over her body. 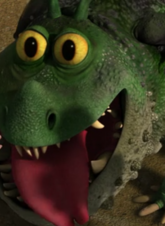 Introduced: "Family on the Edge"

A Triple Stryke captured by Ryker and forced to fight in an arena. After being freed by the Riders he followed them to The Edge before bonding with Dagur.

A trio of young Thunderdrums that start wreaking havoc across Berk. After attempts to train them fail, Stoick releases Thunderdrum so that he can watch over them.

A Deathsong the Dragon Riders hatch out of an egg and raise, before leaving it with the adult Deathsong on Melody Island after he becomes too much of a hassle.

A member of the subterranean colony of albino Night Terrors that Fishlegs discovers. Darkvarg bonds specifically to Fishlegs and is the only one to not turn on him when he tries to leave.

A Scauldron the Riders find beached and go to great lengths with rescue, causing it to bond with Ruffnut in the process.

One of the Changewings that arrives on the Edge for the annual Changewing migration, Tuffnut frames it to make it look like it ate him in order to fake his death so that Ruffnut would feel free to marry Throk. Ruffnut instead paints a picture of Tuffnut on its chest, names it Snuffnut, and declares to remain with it forever, leading to Throk trying to tame it.

A Razorwhip baby that confuses Ruffnut for Wingmaiden, resulting in her having to train to become one. 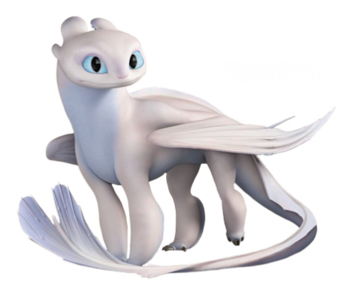 A Light Fury who is introduced in the third movie and becomes Toothless' mate.

A trio of Night Lights who are the hybrid offspring of Toothless and the Light Fury.

Deathgrippers are venomous, predatory dragons under the command of Grimmel.