Characters / How I Met Your Mother Cameo Characters

Space for special small guest characters for few episodes (one to three episodes max.). Unlike the previous page, these guest spots are for One-Note characters and don't have much weight in the story like the others. Most of them are The Cameo or the Girl of the Week.

The girl who taught Ted how to rain dance in the first season finale. Also had a history with Barney.

Stella's awkward secretary, who has a crush on Ted.

Zoey's extremely naïve cousin. Since Ted doesn't remember her name, he called her "Honey" because everything she said evoked this phrase from others.

Author of "Of Course You're Still Single, Take a Look at Yourself You Dumb Slut", which basically attempted against Barney's womanizer tendencies. Barney then challenges himself to score a date with her.

Marshall's co-worker whom he used to make Lily jealous.

Ted and Marshall's friend from college.

A girl Ted met at a Halloween costume party in 2001, whom he met again in season 7.

Robin's ex-boyfriend. She met him at Argentina when she went there after her breakup with Ted.

One of Ted's Girl of the Week that he meets during season 3.

One of Ted's Girl of the Week he meets at World of Warcraft. Extremely volatile and crazy.

Marshall, Lily and Ted's acquaintance from college, who appeared in the episode "The Naked Truth". He is best known as a drunken guy who is mostly playing "Edward Fortyhands". 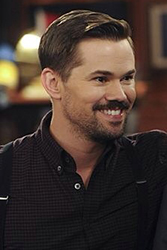 The Mother's (former) bandmate, who slowly became lead singer and demoted The Mother as just bassist. He is known for stirring up the drama just for fun.
Played by: Andrew Rannells

The Mother's long term boyfriend before she meets Ted.

Robin's date who later shares with the gang "The Naked Man" move.

A Girl of the Week who flirts with Marshall during the period he and Lily have broken up. Ted and Barney suspect she has "Crazy Eyes".
Played by: Morena Baccarin

A clumsy co-worker of Marshall and Barney at GNB.

Played by: Will Forte

Ted's first Girl of the Week after he and Victoria breakup. He met her courtesy of Barney. She is a paralegal.

A girl Ted met during a wedding.

One of Ted's Girl of the Week whom he was dating when he first saw The Wedding Bride.

One of Ted's dates in "Mystery vs. History", when Ted tries to prove a point about not making research of a girl's background. Unfortunately for him, his friends discover a huge secret about her right away.

Lily's old high school best friend. Lily tends to regress into a Sassy White Woman every time they get together.
Played by: Ryan Michelle Bathe

One of Ted's Girl of the Week in "Spoiler Alert". Ted only realizes her Motor Mouth because the others pointed it.
Played by: Lindsay Price

Ted's ultimate girl next door. She attended Wesleyan University with Ted, Marshall and Lily, and Ted felt that she was the perfect girl for him.
Played by: JoAnna Garcia Swisher

Stella's sister who breaks up with her boyfriend right before Stella and Ted's doomed wedding.

Sven is the name of the architectural collective comprising of Sweden architects Sven Jorgensen, Sven Pilsen, and Sven Johannsen. They first appeared in "Woooo!", competing against Ted to design the GNB tower.
Played by: Kevin Christy, Ted Cannon and Sam Littlefield