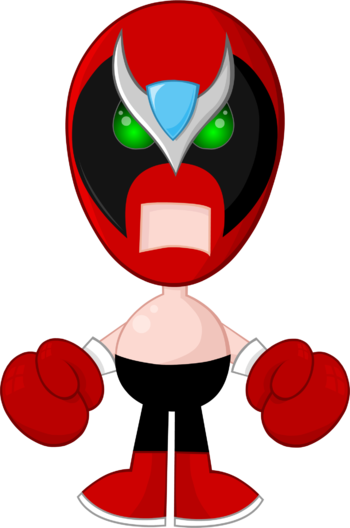 "You don't know it yet, but I'm the real reason you're here. Check me out! No, seriously, check me out."
Debut: "The Homestar Runner Enters the Strongest Man in the World Contest"

Arguably the real main character of the website. Strong Bad is an egotistical little man who appears to be wearing boxing gloves and a luchador mask, though according to him, those are what his face and hands actually look like. His hobbies include tormenting his neighbors (especially Homestar Runner, Marzipan, and Strong Sad), responding to e-mails from his fans, and playing retro video games. His pet peeves include Homestar and people asking him "How do you type with boxing gloves on?"

He is one of your opponents in Poker Night at the Inventory, along with The Heavy, Max, and Tycho.