Hololive English is the English-speaking branch of hololive, the group of Virtual YouTubers founded by Cover Corporation. 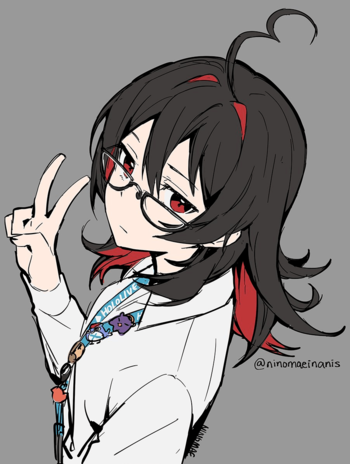 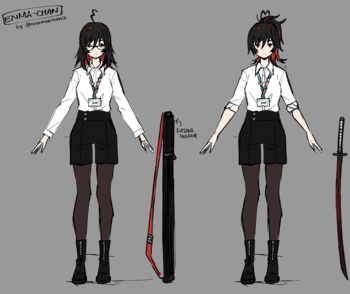 Stream manager of Gura, Amelia and Ina of Hololive Myth. She made an appearance filling in an open team slot during the Left 4 Dead 2 collaboration stream between Gura

The stream manager for Kiara, she was mentioned several times in passing before Kiara decided to draw a semi-official design for her during a members-only stream.

Originating as a joke after the debut of hololive English Generation One, it has since become something of an Ascended Meme. See RunningGag/hololive for more detail.

Haato Akai (Haachama)
Being the first-ever hololive member to semi-frequently do serious English-only streams, the debut of Hololive English in Autumn 2020 inspired her to rant about her status as the resident English speaker being under threat, resulting in her officially declaring herself as an unoffical member of hololive English on the 19th of November, 2020

. She has since made frequent collaborations with almost all of the Hololive English members under this title note As of January 2021, she has done several one-on-one collabs with Amelia, a couple of one-on-one collabs with Ina and Kiara, and a three-way collab with Kiara and Calli, leaving Gura as the only EN member she hasn't done a small scale collab with., and has expressed an ambition to make her status fully official one day.

For her full list of tropes see Haato Ch..
Coco Kiryu
Being a native English speaker with a significant western fanbase, Coco was one of the key players who pushed for the creation of Hololive English, and also took part in the selection of candidates for hololive English Generation 1. After a discussion with Haachama during a collaboration about the fact that they were the 'original' English members, she also officially-unoffically declared the two of them as "hololive English Generation 0" on the 19th of November, 2020

For her full list of tropes see hololive Japan - Generation 4.