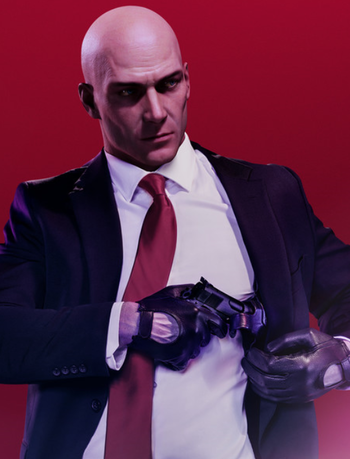 "Names are for friends, so I don't need one."

To most, he is an urban legend, but to anyone who has encountered him and lived to tell the tale, Agent 47 (sometimes called "Mr. Forty-Seven”) is the world's deadliest and most elusive assassin. He is the Player Character of the Hitman franchise, with a 100% hit rate and an unfaltering dedication to his work.

Born in Romania in The '60s, he is the result of a cloning experiment using the combined DNA of five of the world's most dangerous criminals. After being freed from captivity, he was recruited by the mysterious International Contract Agency (ICA), where he made a name for himself by embarking on missions no other hitman would dare to touch.

Warning: Due to the nature of 47 as a character, spoilers for events prior to Hitman 3, as well as for Agent 47: Birth of the Hitman are off. You have been warned!