Not to be confused with Hitman 2.

A Sicilian mafia Don who, upon learning that the gardener at Gontranno Sanctuary is the infamous international assassin Agent 47, kidnaps the Sanctuary's priest Father Vittorio and ransoms him for the millions he believes 47 has, kicking off the plot of the game. Unfortunately, 47 has already given away all his blood money to charity, but he still has his particular set of skills which are going to turn out to be a nightmare for the Don.

A quartet of corrupt Russian generals who are involved with Sergei Zavorotko. Sergei has one of them assassinated by 47 for unspecified reasons; this results in the remaining 3 generals panicking and starting to dig into the circumstances of the assassination, forcing Sergei to have all of them assassinated as well. They consist of Rinat S. Rumyantsev, Makarov, Mikhail Bardachenko and Vladimir Zhupikov.

A Spetznaz agent working for the KGB who is dispatched to infiltrate the party at the German Embassy in order to deal with General Zhupikov's defection and retrieve the briefcase containing the missile guidance system Zhupikov is planning to sell to the West. 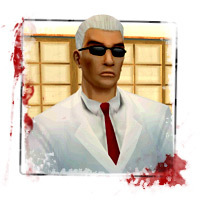 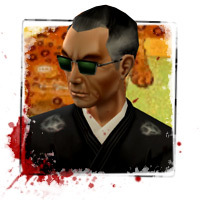 Masahiro Hayamoto is the head of the Yamaguchi-Gumi Yakuza clan. He has recently purchased an advanced Russian missile guidance system from General Zhupikov, making him a target of Sergei's assassination spree using Agent 47. He is considered one of the most dangerous men in the world and impossible to find. It requires 47 eliminating his son to find him.

A wealthy Malaysian hacker and cryptologist who has stolen a secret American encryption algorithm capable of allowing warheads to penetrate the United States' missile shield. 47 is hired to kill him and steal the algorithm. Charlie turns out to have an identical twin who seems to be the real brains behind the hacking operation, whom 47 kills by mistaken due to not realizing Charlie has a twin brother.

The local Khan, or leader, of a renegade region of Nuristan (Afghanistan). He manages to steal a shipment of nuclear warheads from Sergei Zavorotko, which he plans to sell to the U.N., so Sergei hires 47 to kill him and retrieve the nukes. His subordinates Colonel Mohammad Amin, Lt. Ahmed Zahir and Lt. Yussef Hussein are also targets.

A trio of contract killers working for Deewana Ji's doomsday cult, serving as his top enforcers. They are the targets in the "Temple City Ambush" mission, in which the three of them are hunting for 47's ally Agent Smith.

A high-profile doctor who is Deewana Ji's right-hand woman and chief propagandist. She is the target of the mission "The Death of Hannelore".

The leader of a powerful doomsday cult operating out of the Punjab region of India, known to his followers as "Zip Master". Having stolen the encryption algorithms from Charlie Sidjan and the nuclear warheads from Sheik Malik, he's the one who manages to fully assemble the nuclear missile system capable of attacking the U.S. and is the final target before confronting the game's Big Bad, Sergei Zavorotko. 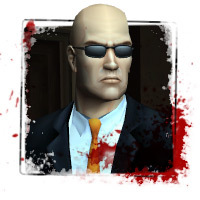 "Another brother? Thought I killed all of you. I wondered who was behind all of this; trying to kill me with a lesser hitman." - Agent 47, upon discovering the identity of the counter-assassin hired to kill him

An inferior older clone specimen created by Doctor Ort-Meyer. He was found in the asylum by the Mystery Man and Sergei before being recruited as their operative. They loan him out to Deeanna and his cult before sending him after 47. 47 kills him before going after his boss. 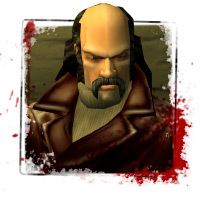 "This guy is damn fantastic. Maybe not as strong as me, but...fast!"

A well-connected mob boss and 47's 'Uncle'. Sergei was the guy who, along with a well-dressed Mystery Man, formulated a plan to lure Agent 47 out of retirement after he dropped off the grid. He might be the most vanilla bad guy in Hitman, but he's also the strongest one physically.