This page details the supporting characters affiliated with the Devil faction in High School D×D.

One of the three Main Factions alongside the Angels and Fallen Angels, the Devils consist of the 72 Pillars of High-Class Devil noble families, the Extra Demons and the countless armies under them. When the original Four Great Satans died in the Great War, their descendants were met with opposition by other devils in wanting to continue the Great War and a civil war erupted. The original descendants lost and a new government was placed with Sirzechs Gremory, Serafall Sitri, Ajuka Astaroth and Falbium Glasya-Labolas becoming the new Four Great Satans. 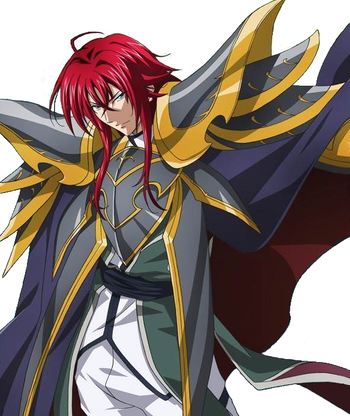 The son of Zeoticus and Venelana Gremory and older brother of Rias Gremory. He is one of the Four Great Satans, bearing Lucifer's name. 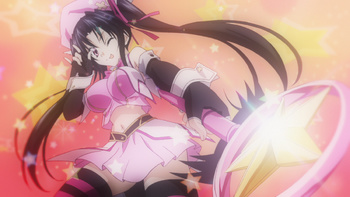 The older sister of Sona and also one of the Four Great Satans. She's also in charge of foreign affairs. 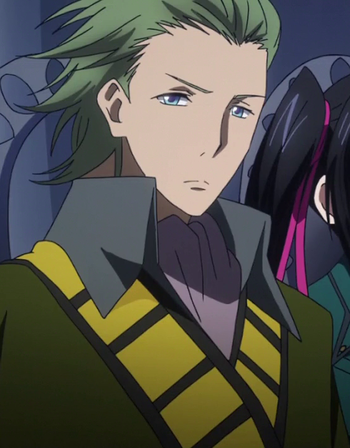 The Genius who laid the foundations of the Rating Game and Evil Piece systems. Also likes to give out a mysterious feeling because it's cool.

Considered as the military genius but hardly does any work and just passes his work to either his servants or to other people.

Tropes relating to all of them:

The father of Rias Gremory and Sirzechs Lucifer, husband of Venelana Gremory, and paternal grandfather of Millicas Gremory, Zeoticus is the head of his family. 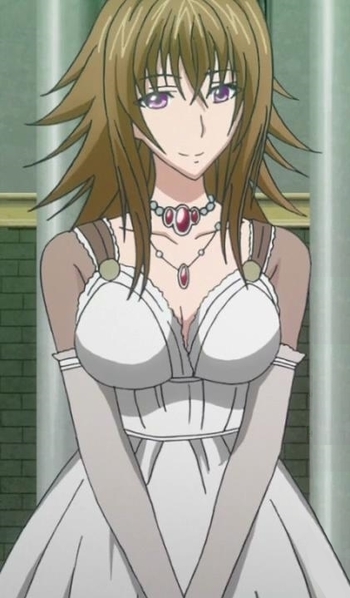 Venelana is the wife of Duke Zeoticus Gremory, mother of Rias Gremory and Sirzechs Lucifer, and paternal grandmother of Millicas Gremory who comes from the House of Bael. She is also known by her sobriquet, Brunette Madame the Extinct. 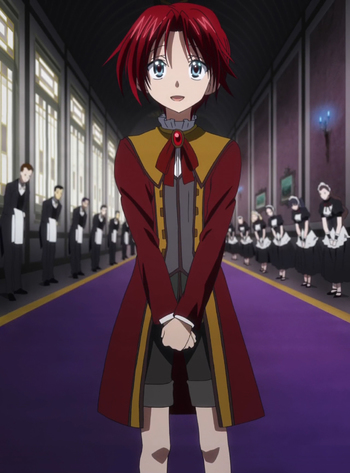 The son of Sirzechs Lucifer and Grayfia Lucifuge, grandson of Zeoticus and Venelana Gremory and nephew of Rias Gremory, Millicas serves as the family's next-in-line. 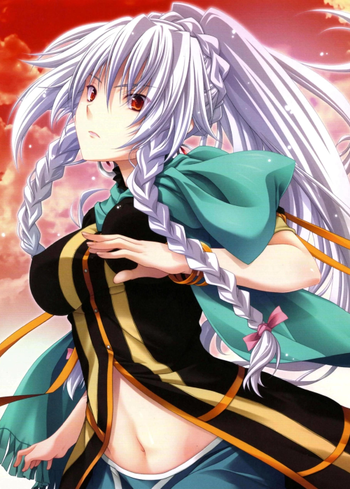 The head maid, Queen and wife of Sirzechs Lucifer, and mother of Millicas Gremory, Grayfia of the most powerful characters in Hell.

A Qilin who is Sirzechs's Pawn.

One of the founding members of the Shinsengumi who has been reincarnated into Sirzechs's Knight. He is also Kiba's swordmaster.

Sirzechs's Bishop who knows a lot about magic.

Sirzechs's Rook which he had to use a Mutation Piece.

A descendant of Beowulf who became Sirzechs's other Pawn due to him losing against Sirzechs.

Sirzechs other Rook who has been mentioned in the afterword of Volume 8.

Tropes relating to them: 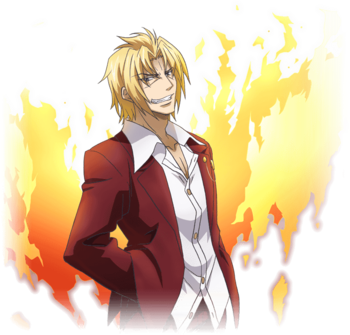 Rias's former fiance and the third son of the House of Phenex.

The eldest son of the House of Phenex and heir to the house. 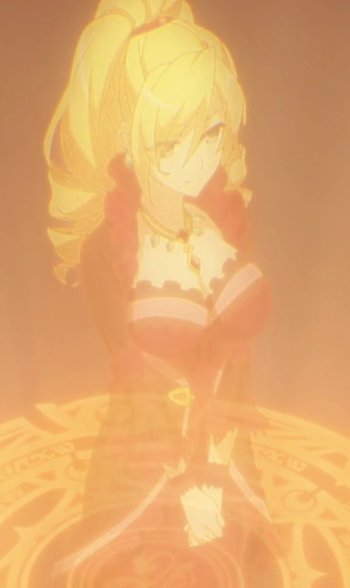 The mother of the Phenex siblings. 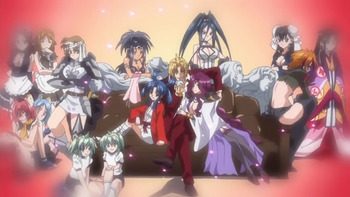 One of the 33 remaining devil families of the 72 Pillars, the Bael family is the highest-ranking among the pillars. They boast a proud warrior culture. 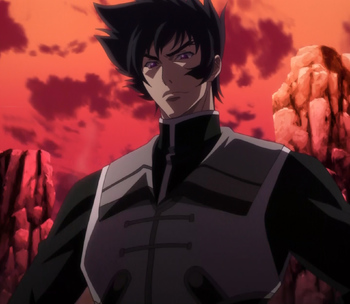 The son of Lord Bael and Misla Bael, Sairaorg is the heir to the clan. Exiled from his home after he was unable to inherit his family's Power of Destruction, Sairaorg trained himself to the point that he can fight off anybody as one of the strongest devils. His wish is to become one of the Four Lords of Hell. 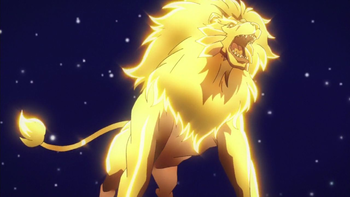 Sairaorg's Pawn. In reality, he is the Sacred Gear "Regulus Nemea", which Sairaorg picked up after its host died. 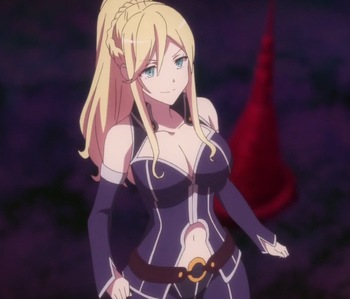 Sairaorg's Queen from the House of Abaddon, one of the families of the Extra Demons. 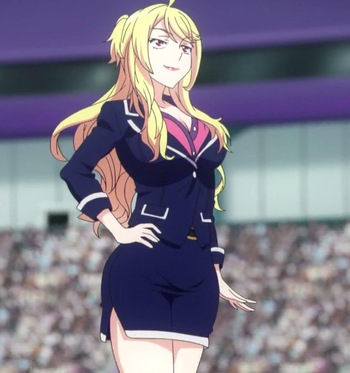 Sairaorg's Knight from the House of Crocell.

Sairaorg's Knight from the House of Furcas.

Sairaorg's Rook from the House of Balam.

Sairaorg's Rook from the House of Bune. 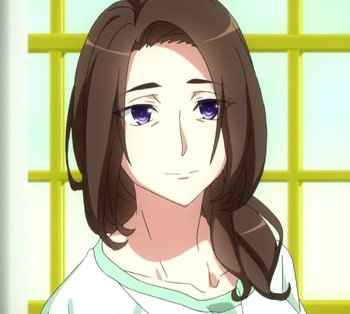 Sairaorg's half-brother who got scorned by his clan due to the fact that Sairaorg defeated him. Appears in Volume 21 when the Bael territory was attacked.

The first head of the Bael clan. 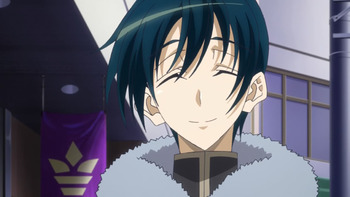 An associate of the Khaos Brigade. Wanting to have Asia Argento as part of his harem, he harms himself and has her heal him, which results in Asia's exile. He was brought in by Shalba Beelzebub to kidnap and marry Asia, and launch an assault on the Underworld. Failing a few attempts and defeated by Issei Hyoudou, he was killed by Shalba. 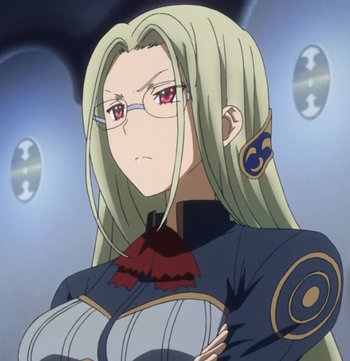 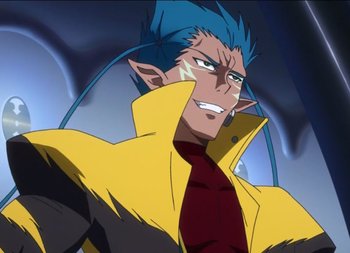 The next heir to the House of Glasya-Labolas. He is Falbium's younger brother.
Diehauser Belial 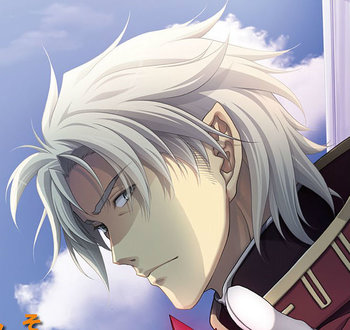 The head of the House of Belial and the number one ranking Rating Game champion. Known as "Emperor" Belial.

A member of the House of Belphegor, Roygun is the second champion of the Rating Game using the king piece.

Cousin of Diehauser, the former governor of Kuoh before Rias, and Masaomi Yaegaki's devil lover. Already dead by the time the story starts.
Viser 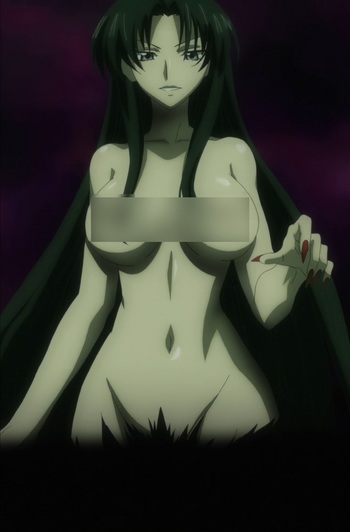 A stray devil the Occult Research Club was ordered to kill.

A devil from the Extra Demons who is the head of the Magician's Council and Tannin's King. He is one of the oldest devils in existence, having existed during the time of the original Satans. 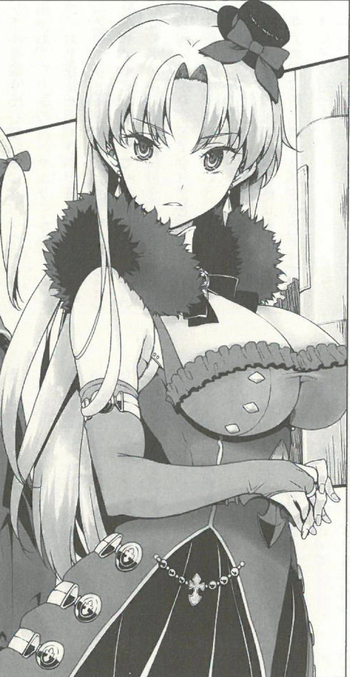 A devil from the branch family of the Astaroth House. Due to the scandal caused by Diodora's betrayal and subsequent death, it was decided she would be the next Head of the Astaroth family early on. Unlike Diodora, Latia doesn't discriminate against Low-class or Reincarnated Devils.

A devil from the main branch of the House of Glasya-Labolas, Iryuka is Ravel's kindergarten classmate and is the next Head of Glasya-Labolas, as she is replacing Zephyrdor, who's unable to emotionally recover from his loss to Sairaorg Bael.

Devil #61616 created by Hades, and one of the two Super Devils created along with Verrine.

Devil #36402 created by Hades, and one of the two Super Devils created along with Balberith.

Devil #14784 created by Hades, considered above Satan-class along with Gressil.

Devil #50019 created by Hades, considered above Satan-class along with Sonnellion.