Characters / Heroes of the Storm: Other Universes

This page is for how heroes from classic Blizzard games like The Lost Vikings and Nexus-born heroes appear in Heroes of the Storm only. For how the characters act in their own universes, see the respective pages for those games. 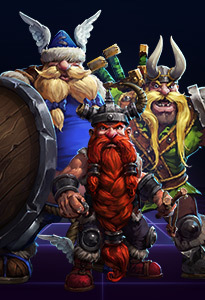 Erik: "Where will we end up this time?"

A trio of Vikings from Earth. Erik, Olaf and Baleog are three neighboring Vikings who lend their strength together, Erik's swiftness, Olaf's stoutness and Baleog's fierceness, for their daily hunting routine and providing for their families in their village. Life was good, and they hoped they never had to leave their village. Alas, in the very night after the phrase was uttered, an evil alien named Tomator whisked them away from their homes and the trio had to work together, combining their strength even more, to not only escape and finally defeat Tomator, but also traversing through various worlds alien to them, until they return home. Tomator at one point returned, but the Vikings still outwitted them, this time with the help of the werewolf Fang and the dragon Scorch. They would be incumbent from adventures for many years... And they're lost again, now spotted in the Nexus.

The Lost Vikings form an incredibly unique Support hero. The player is in control of three separate heroes with different stats and passive effects, which are controlled in an RTS style. Olaf the Stout is the tankiest of the three, but is the only melee attacker and deals the least damage. Every few seconds, his attack charges him towards the target, and he will also begin rapidly restoring his health while out of combat. Baleog the Fierce throws his sword, which gives him an AoE cone effect on his basic attacks. He deals the most damage of the Vikings and has moderate health. Erik the Swift has the fastest attack speed, higher-than-average movement speed, and the longest range, but he's the squishiest by far. Their trait, Viking Hoard, permanently increases all Vikings' health regeneration every time a Viking collects a Regeneration Globe. Additionally, each Viking only gives 25% of the normal XP when they're killed. Unlike most heroes, The Lost Vikings possess no basic abilities, but can potentially gain abilities with talents.

Their first heroic, Longboat Raid!, has them board an Unstoppable viking ship while shooting at nearby heroes. The boat has increased health for each Viking able to hop in, but the Vikings are all stunned for a long duration if the boat is killed. Their second heroic, Play Again!, has one of them briefly channel to summon every Viking to one location, restoring their health and respawning any dead ones.

The Lost Vikings do not use mounts, instead having the ability Go Go Go! to temporarily increase the movement speed of all Vikings. Additionally, each Viking has a separate Hearthstone, and drinking from a Healing Fountain with one Viking grants the healing effect to all three. 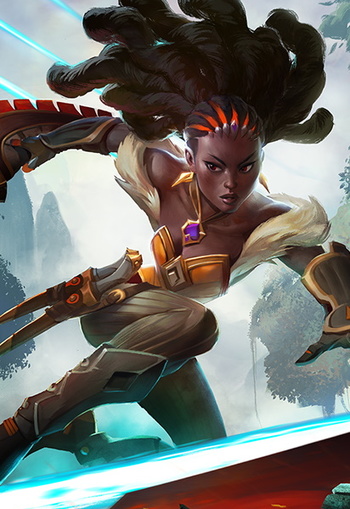 A sworn knight and holder of a singularity shard, Qhira's only desire is to seek out others who may have escaped the destruction of her doomed realm, Iresia. While she searches, she gets by as a bounty hunter - a job she loathes, despite her exceptional skill.

Qhira is a mobile Melee Assassin from the Nexus who zeroes in on targets and scores the kill. Her trait, Grappling Hook, fires a skillshot that pulls Qhira to the first enemy hero or piece of terrain it hits. Her first basic ability, Carnage, stabs her sword in a direction, damaging enemies. Blood Rage, her second ability, passively causes her attacks and abilities to apply a stacking Damage Over Time bleed. When activated, Qhira deals damage to all afflicted enemies and heals herself based on how many bleed stacks they had. Her final basic ability, Revolving Sweep, lashes her sword out. If she hits an enemy hero, she attaches, becoming untargetable as she revolves around them while dealing damage to enemies between her and the target. Qhira can reactivate before the skill ends to dash at the target, stunning them and knocking them back.

Her first Heroic ability, Unrelenting Strikes, unleashes a whirlwind of blade strikes around her that grow in range over its duration. The final swing deals extra damage and also stuns. Her second Heroic, Final Strike, damages all enemies in a line after a delay, dealing far greater damage to enemies below a certain threshold.

Her current skins are Scrapper Queen Qhira and Cosmonaut Qhira. 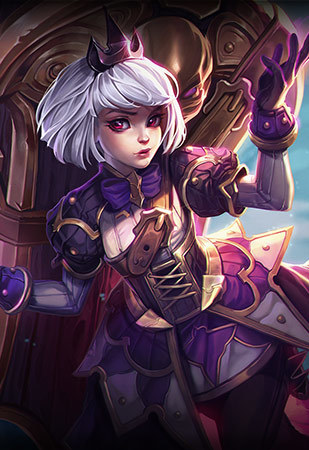 A young girl hailing from Raven Court, Orphea is the daughter of its realm lord, the Raven Lord. After discovering her father secretly unleashing the Dark Nexus, she left her home and coincidentally met Deckard Cain in King's Crest, only to witness her father defeat the Lady of Thorns and cause the fall of King's Crest. Vowing to stop her father from hurting anyone else, she chose to rise up against him and become a hero in the Nexus.

Orphea is a Ranged Assassin, and was the first Nexus-born Hero of the Storm. Her trait, Overflowing Chaos, grants Orphea a stack of Chaos whenever an ability damages a hero, which boosts the damage of her next Basic Attack and cause it to heal her, stacking up to three times. Her first basic ability is Shadow Waltz, which slams a tendril into the ground after a short delay, dealing damage in a line. If it hits a hero, the cooldown is lowered and Orphea will dash a short distance on her next movement. Chomp summons jaws that damage all enemies in front of Orphea within an arc. Her final basic ability, Dread, sends out a wave that lightly damages and slows all enemies it passes through, then erupts at the end of its path, dealing heavy damage and slowing all enemies caught in the burst.

Her first Heroic ability is Eternal Feast, which deals damage to all enemies in its area and is repeated every second as long as it hits an enemy Hero. Her second Heroic ability, Crushing Jaws, pulls enemies in an area towards the center and stuns them for a moment.

Her current skins are Slacker Orphea and Babyface Orphea.