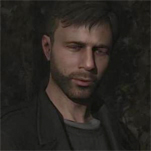 "Everything I did, I did for love."

Ethan is an architect with a wife and two sons. Two years prior to the main story, his elder son, Jason, dies in a car accident that leaves Ethan in a six-month coma. Now awake, Ethan remains depressed and stricken with grief. He suffers from agoraphobia and lives alone, estranged from his wife Grace Mars and distant from his other son, Shaun. Ethan soon discovers that Shaun may become the next victim of the Origami Killer, and is forced to go through five trials (danger, suffering, brutal suffering, murder and sacrifice).

"There has to be another way."

Madison is a young photojournalist living alone in the city. Suffering from chronic insomnia and nightmares, she occasionally checks into motels, as they are the only place she can properly sleep. She eventually finds herself involved in the latest Origami Killer case, conducting her own investigations.

"I'm not sure that's entirely legal."

Jayden is an FBI profiler sent from Washington to support the police force with their investigation into the Origami Killer. Jayden possesses an apparatus which consists of experimental augmented reality glasses and a single right hand glove called ARI, or "Added Reality Interface". This allows him to rapidly investigate crime scenes and analyze evidence. He is also struggling with an addiction to the drug triptocaine, which helps him cope with the mental side effects of using ARI.

Shelby is a former police officer and Marine who suffers from asthma. He is currently working as a private investigator conducting an investigation into the Origami Killer.