This is a list of the absurdly awesome characters that make up the equally awesome series Hayate × Blade, by Hayashiya Shizuru.

Please note that names have been listed with family names first. 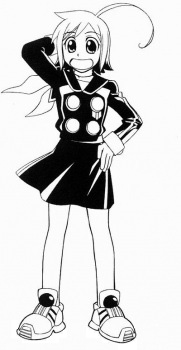 The titular protagonist, a simple-minded and reckless idiot. One of the most notable things about her fighting style is her incredible speed, and she claims to be a third dan in kendo. Many a Fan Nickname in the series actually began as, or sometimes are nicknames she gave to other characters. She has a heroic(?) alter ego(?) known as Family Mart Mask. She's responsible for the creation of the Shigeru Family

, a bunch of cat-themed sword decorations that attach to the pommels of sword bearers' swords. She's given one to anybody she has significant screen-time with.

Though seemingly unparalleled in ability, Ayana starts out unwilling to take part in hoshitori battles due to guilt from having caused her previous partner injury out of her own conceit. After entering the partnership with Hayate, however, she still spends a good part of her appearances playing video games (usually dating sims) and beating up people that annoy her. 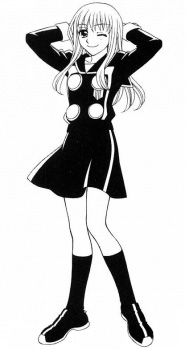 Ayana's best friend and roommate, who acts like an extremely lecherous Cool Big Sis, and often gets beaten up by Ayana for it (the lechery). Yet they are also very close, and she seems to know quite a bit about Ayana's past. Self-proclaimed oniwaban* Ninja Bodyguard to Yuho, her Protectorate.

She becomes the hoshitori's only one-woman team after she and Yuho fight Ayana and Hayate, bearing Yuho's Heaven sword as well as her own Earth sword.

Having a weak constitution, Yuho was sickly to the point of being in and out of hospitalization for a large part of her childhood, even up to a year for a stretch. Despite that, she is skillful enough to have come up with her own style, and has the odd behavioral tic of doing thumbs-downs when thumbs-ups are expected.

Hayate's Hot-Blooded roommate in the same year and the embodiment of what happens when a Childhood Marriage Promise goes into lololand. Having entered Tenchi expecting to be shinyuu with Riona, she challenges Ouka with the intention of breaking them up, only to, as Hitsugi put it, win the battle but lose the war. She ends up with Isuzu, whom she calls "Wanko", instead. They later form a Four-Girl Ensemble with Kiji and Michi, a group affectionately known to fans as the Momotaro-gumi. 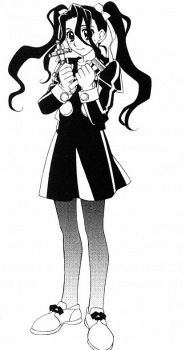 First shown as a Stringy-Haired Ghost Girl who creeps the heck out of Momoka and those who see or hear about her because of her powerful supernatural abilities, which run in the family. Their eventual team-up comes with a forced makeover that shows her as being Beautiful All Along. She retains that interest in the occult though.

Isuzu's classmate who comes from a long line of shamans. She has a tendency to take herself too seriously. Drawn to Isuzu because of their similar backgrounds, she dissolved her pact with Michi to team up with Isuzu instead. They make up in a rather Slap-Slap-Kiss fashion.

Kiji's partner, a innocent, artless person that gets along well with everyone. She acts like a go-between among the group of friends Hayate has in the same year, easily helping them get along with each other. Her family runs a farm.

An upperclassman who is a good friend of Hayate's and, in modeling terms, on the same scale as the short protagonist. Her family has financial difficulties that she pays off with hoshitori earnings. Though she grudgingly took part in Mizuchi's schemes, she is still decent at heart.

An admirer of Ayana whose offers of partnership were repeatedly rejected, embittering her so much she turned against Ayana instead. She also happens to be the daughter of the boss of Smiley Finance (the company Hayate's orphanage owes money to), and at the behest of her mother, she did everything in her power to prevent Hayate from rising in rank and gaining more money. After trying and failing to sabotage Hayate's money-making efforts, she undergoes a Heel–Face Turn and helps them out instead.

Former shinyuu of Ayana, who dissolved their pact after a watershed duel left Yukari severely wounded by her own partner. Shown rising up the ranks in earlier volumes with her new partner Maki, she is eventually promoted to A-rank. Although almost always snarky and cold towards Ayana when interacting with her, signs point to Yukari still caring. Probably.

Seen promoted to the student council at the start of Hayate × Blade 2.

Yukari's current shinyuu and head of the art club. Called a genius because of her capability to paint and fight with the same hand, she was however torn between the two, unable to reach her full capacity in either. After the battle against Ensuu and Meiko, she has started to use a left-handed western fencing style.

Seen promoted to the student council at the start of Hayate × Blade 2.

The main reason Ayana and Yukari split up in the past. Ensuu enjoys nothing (except maybe eating) more than fighting and hurting people, and as such, she has very few qualms about giving her opponents major injuries, and even her own partner admits to being afraid of her sometimes, though she may have just been bullshitting for effect. Underneath her considerable violent tendencies, she is actually quite the cloudcuckoolander.

Ensuu's partner and the one who holds her leash. Like Ensuu, she doesn't care for rank, money, or Hitsugi's title, and when given the opportunity to return to the student council, she turns it down, choosing to fight those newly promoted to A-Rank with Ensuu at their current rank. She claims to enjoy "observing" people, and despite possessing much less skill than her partner, she is far more dangerous. 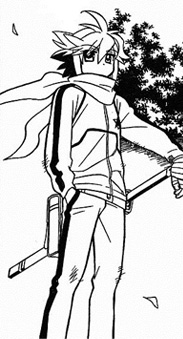 First making an appearance (in person) during the events of Volume 8, the older Nagi has been the subject of Twin Switch with her sister on occasion. After being in rehabilitation for an unknown condition, she later enrolls as a student holding the Sword Scholarship as well.

A new girl at school who ends up becoming close to Nagi.
Makoto 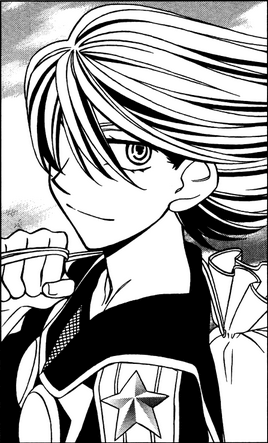 A third year high school student and the only sword bearer in the graduating class of Tenchi Academy. She's a Lone Wolf who has held onto her last remaining star for years. On top of that, she's a huge fan of samurai and yakuza books and movies, from which she learned her entire sword style. She's also completely insane.

After she graduates, she takes a job as Nagare's assistant in Tenchi Academy's kitchens.

Yuho's roommate. Put bluntly, her luck sucks and she always seems to manage to find herself on the receiving end of Ayana's wrath.

The leader and founder of the A-Team, the unofficial 80-member-strong Mikado Akira Fanclub. She's not too bright and she spends a lot of her time being manipulated by her cousin Himuro Mei.

Kikkawa's Shinyuu and co-leader of the A-Team. She's about as smart as Kikkawa is, and she mainly serves as her Yes-Man.
Riona and Ouka

A budding comedian and victim of Domestic Abuse. Recent appearances have associated her with little else aside those two traits, which is either hilarious or sad, depending on who you ask. This is accentuated with the contrast between that and the way she was introduced, which made her seem more of an Onee-sama with elements of Distressed Damsel.

Riona's partner who smacks her around at least as violently as Ayana does to Hayate, a sign that there is a Double Standard and that All Girls Want Bad Boys, if only for (Riona's perceived) comedic purposes.

The person behind the concept and implementation of hoshitori, and almost certainly the most powerful person in Tenchi Gakuen, both combat-wise and authority-wise. She has a strong fondness for the things that interest her. Her voice can become loud enough to make mics squeal horribly.

Given how she created the Hoshitori System and owns Tenchi Academy, she can and will mess around with the rules for her own amusement, and despite being the dean of the academy, she does virtually no work.

On top of that, she is completely insane. 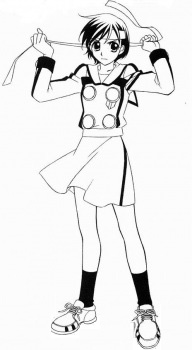 Hitsugi's shinyuu, and thus the one standing beside her in the shared position of that above all in Tenchi. She is the one responsible for ringing the bell that signals the start and end of hoshitori battles. An extreme Determinator who has trained beyond the realms of common sense.

Although she is not technically a dean, she plays a large part in running the academy, mostly by doing the things no one else wants to do, or that the Kaicho is too busy creating insane new laws to remember (filling out paperwork, signing documents, etc.)

Ojou of the reputable Mikado family, with a fixation on defeating Hitsugi. Because of complicated and not-really-elaborated-on reasons, if/when she defeats Hitsugi and takes over as the chairwoman of Tenchi Academy, the hoshitori system will be abolished.

Akira's childhood friend and shinyuu, who apparently will be getting married to Akira's cousin Ryouichi after graduating from high school. A sharp character who calmly takes in and sees through the various intriguing affairs around the school.

A former S-ranker who had wanted to take Hitsugi's place, and is said to have bribed her shinyuu Minori with food. Brilliant, but Lazy, she lives to oppose things like hard work and determination, preferring to prepare far in advance and master the bare essentials instead.

Appointed as landlady of the Heaven Dormitory by Hitsugi, to even her own shock.

A sword bearer whose small size belies her great physical strength. She's simple-minded and has difficulty when it comes to thinking about complex matters. She aims to build a campus made of candy after she and Kurea take Hitsugi's position.

Promoted to S-rank after the position was turned down by Ensuu and Meiko. A self-proclaimed punk that sees the Sex Pistols as her role models and whose English vocabulary seems to consist of slang, swear words, and nothing else. She resents Akira for some inexplicable reason, though some theorize that it has to do with the latter's sorta-punkish image and their vastly differing tastes in music.

Sid's partner who has no idea where the nickname "Nancy" comes from. Born and raised in Yokosuka

, where she learned to knife-fight from American soldiers. 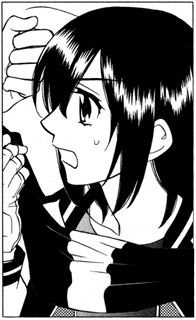 Leader of the hoshitori judges. 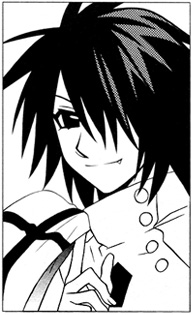 Captain of the Nurse Corps.

The staff member who oversees the paperwork side of the hoshitori.

The owner of Hayate and Nagi's old orphanage.
Kuga Gen

Jun's father and the patriarch of the Kuga Clan. Not actually Jun's biological father.

Ok, ok, if you want a little more than that, officially, she's the student council's secretary, but really, she just does all the bullshit jobs Hitsugi can think up and doesn't want Miyamoto to do. She's lame, she's boring, she's a bit of a jerk, and she's in love with Hitsugi.