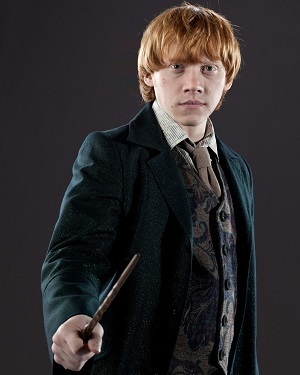 "We're with you whatever happens."

"Maybe you don't have to do things all by yourself, mate."

The id of the series' resident ¡Three Amigos!. Ron, the second youngest child and youngest son of the Weasley family, has something of an inferiority complex. He first meets Harry on Platform 9 3/4, and the two became fast friends on the Hogwarts Express before they'd even reached Hogwarts. Throughout the books, he sticks with Harry through thick and thin, with the exception of a month in fourth year and again in Deathly Hallows— being constant sidekick to The Boy Who Lived sure doesn't help that inferiority complex.