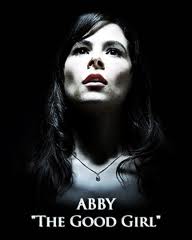 "Now, after all these years... It's happening again."
The Sheriff's daughter, Abby's mother was murdered by John Wakefield in the 2001 massacre. Her father sank into a deep depression after this and sent Abby to live with her grandmother in L.A. Seven years later, she returns to Harper's Island to celebrate her best friend Henry's wedding. She is the central motivation for the Wakefield-Dunn killings. Henry betrays his father and mentor in order to fulfill a Childhood Marriage Promise made years before. Did we mention Abby is Henry's half-sister? Well, she is. Abby survives the massacre. 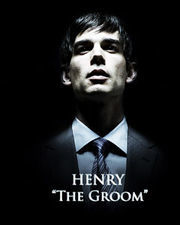 "Take your time. We have all the time in the world."
The lucky groom. Henry used to summer on Harper's Island with his family. It was there that he met his future fiancee, Trish Wellington...when cleaning her father's boat. Henry is best friends with Abby, and has been since they were little. Henry is the son of John Wakefield and Sarah Mills, and the murderer out of the 25 characters. He is killed by Abby in Episode 13.

"Ever wonder how one short walk can change everything?"
The bride of the wedding. She's completely devoted to Henry and proves to be pretty competent when events take a turn for the worse. In Episode 12, she's killed by Henry after he reveals himself as (one of) the killer(s). 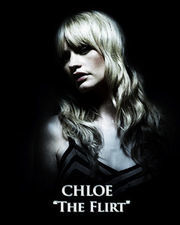 "It's happened here before, and it's happening again. We're being picked off one by one."
One of Trish's bridesmaids. She is flirty, fun, and devoted to her boyfriend Cal. She also has an odd obsession with serial killers, most particularly John Wakefield. 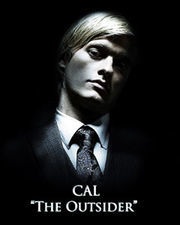 "I want to be right here, beside you, for the rest of my life."
Chloe's boyfriend and her 'plus-one' at the wedding. An English medical doctor, he is a stranger to the rest of the wedding party. 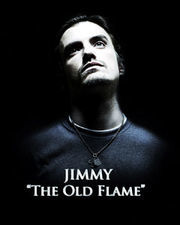 "Abby Mills...I knew you'd be here."
Abby's high school sweetheart and ex-boyfriend. He never quite got over her leaving so suddenly after the Wakefield murders and is intent on reconnecting with her when she's in town for the wedding. He is one of the four survivors of the series, escaping with Abby. 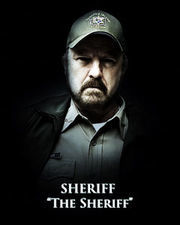 "It's Wakefield's game. He takes the ones we love, and picks us off one by one."
Supporting Cast

Thomas Wellington: The Father of the Bride 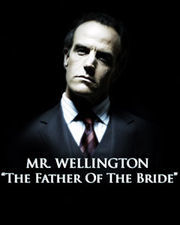 "My daughter's not marrying Henry Dunn."
Trish's father, and the CEO of a major commercial real estate firm. He is a self-made man, and the ultimate Determinator, completely committed to getting what he wants, including stopping his youngest daughter's wedding. He is killed with a head spade booby trap during the wedding rehearsal in Episode 5. His death is a major turning point in the series, and officially closes off the 'happy and carefree' part of the show.

Hunter Jennings: The Other Man

Played by: Victor Webster
Trish's ex-boyfriend from college who, was apparently scared off by Henry after the couple broke up. However, Daddy Wellington is paying him to come back to the island in order to break up the relationship between Henry and Trish. He finally gives up and is paid an extra fee by Mr. Wellington to leave the island... and is killed by a rigged shotgun planted in his boat. 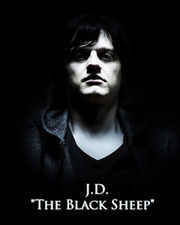 "I've got one last surprise for you, Henry. I think you're really gonna like it."
Henry's unstable younger brother. Suicidal, outcast, and antisocial, he was extremely shaken by his parents' deaths and finds it difficult to connect with anyone after that. He is killed by Henry in Episode 8, and it is heavily implied that killing J.D. was most difficult for Henry. 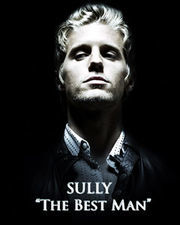 "This is really gonna suck."
The best friend of Henry Dunn, and best man at his wedding. He is fatally stabbed by Henry in Episode 13, and officially the last of the wedding guests to die. 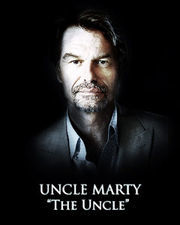 "Love is a funny thing, isn't it?"
Henry and J.D.'s uncle, and J.D's legal guardian since his parents' deaths. He's fun-loving and acts much younger than he is, and is completely devoted to Henry and his impending wedding. He is killed in the first episode, and is the first of the 25 characters to die.
Advertisement:
Tertiary Characters

Shea Allen: The Maid of Honor 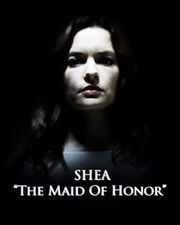 "Couples shouldn't have secrets."
Trish's big sister and the matron of honor. She escapes the island with Madison in Episode 13 and is one of the four survivors of the massacre 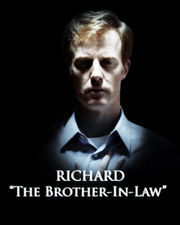 "Ah, the velvet straitjacket of being a Wellington."
Shea's husband, Madison's father, and Thomas's long-time right hand man in the business world. More cautious and reserved than his father-in-law, Richard has a tendency to appear somewhat meek and maybe even pathetic, to those that don't know about his secret ways of coping. Richard is harpooned in Sploosh, shortly after Trish exposes his affair with Katherine. 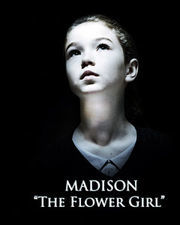 "Did you know people were killed on this island?"
The young daughter of Shea and Richard, Madison is a somewhat withdrawn, socially awkward little girl. Though she isn't much of a problem child, she has strange interests and hobbies...and not even her parents are ever entirely sure what she's up to. She is kidnapped by John Wakefield to keep the others from leaving the island. Post rescue, she manages to escape the island along with her mother. 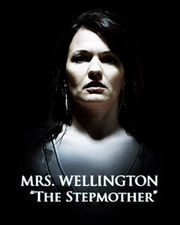 "I loved your father. I may have done some foolish things, but I didn't kill him."

Thomas's second wife, barely older than Shea. Beautiful, confident and with a warm, self-effacing personality, Katherine is the cut-out image of the perfect trophy wife. And, though she may be comfortable playing accessory to a wealthy businessman, Katherine has deeper desires that her money and influence can't quite satisfy. After her affair with Richard is exposed, Katherine is shunned by her stepdaughters and most of the rest of the party. She is stabbed in the back and left to bleed out in Seep. 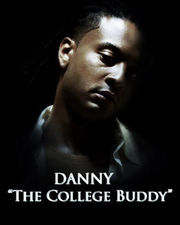 "I think we could use a prayer."

A groomsman and, like Sully, Malcolm and Booth, one of Henry's fraternity brothers. Danny is less easygoing than Sully and Malcolm, and more drive and confident than Booth. He likes to get along with people,and it would be pretty difficult to get on his bad side. 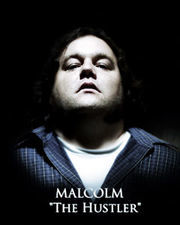 "I thought...if you guys thought Booth ran away with the money...maybe I could keep it."
One of the groomsmen and, like the others, one of Henry's frat brothers. Malcolm was a quintessential party animal in college and, after graduating, sought to turn his love of indulgence into a career, trying to get his home microbrewery Sacred Turtle off the ground. He hasn't been that lucky though, and is now more desperate than he'd like his friends to know.

Played by: Sean Rogerson
One of the groomsmen, and therefore part of the same frat from college. Booth is something of a hypochondriac, and his seasickness and social awkwardness make him a subject of good-natured ridicule from his friends. 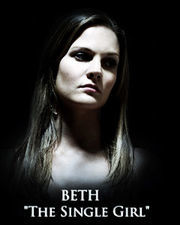 "I hate this place."

Trish's college roommate. A scholarship student with not a lot of private means, Beth is also quieter and more withdrawn than her boisterous, beautiful friends. Regardless of their social differences, however, Beth is comfortable in the extravagant world of the Wellingtons, though she can't always hide how much she'd like a piece of it for her own. 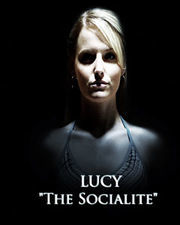 "So...you and Henry have been friends for a while. You had to have hooked up at least once, right?"

A bridesmaid, and Trish's best friend from growing up. The Daramours and Wellingtons used to summer on the island together, though Lucy never developed as much of an attraction to the place as Trish did. Lucy is confident, beautiful and not afraid of showing it off, despite her happy relationship with her boyfriend back home. 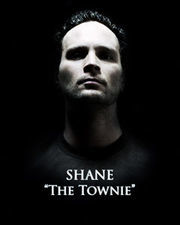 "Where do you get off being all self-righteous? Far as I can see, this all started when you people showed up."
A resident of the island who is best friends with Jimmy. 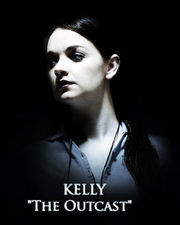 "I see him. John Wakefield. Except not in my dreams. Awake. For real. Like he's back."
Shane's ex-girlfriend. Her mother, Kate, was one of the victims of the 2001 Wakefield massacre, and Kelly never fully recovered mentally or emotionally. She wants nothing more to escape the island, but there always seems to be something getting in her way. 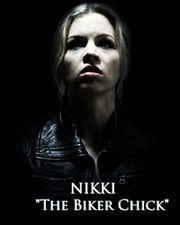 "Listen up, you animals! If any of you lay a hand on this flower...I'll nail your tongue to the bar."
The owner and manager of The Cannery, Harper's Island's local dive bar, and an old friend of Abby's. 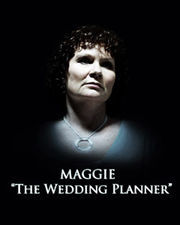 "Maybe he's only after you all. He's not interested in us locals."
The manager of the Candlewick Inn, and Trish and Henry's wedding planner.

Played By: Maria Avgeropolous
The stripper for Henry's bachelor party.

A fortune teller hired as the entertainment at Trish's bachelorette party.

A pair of cops who are sent to the island with woefully out-of-date information about the recent killings.

Played by: Callum Keith Rennie
A mysterious serial killer who appeared on Harper's Island in 2001 and, seemingly without motive, killed six people before being shot dead by Sheriff Mills, whose wife was one of the victims. Seven years later his presence is still very much felt on the island. In reality, Wakefield is still very much alive and is responsible for the ongoing murder spree, along with his illegitimate son Henry.