The standard six playable characters that have been formed since HTFA 2. (there were only four members in HTFA 1)

Tropes applied to these characters:

The Happy Tree Friends mascot and the lead character of the HTF group. Shoots the fastest.

A red porcupine whose cowardice has been toned down somewhat in this series. She's willing to join Cuddles and company to defeat Bowser and his army. Jumps the highest.

A dark blue skunk who is one of the playable characters that have high running speed in the series.

A hyperactive green squirrel with sweets stuck on his fur. He still retains his sugar-crazed trait and ditzy personality. He is able to stop dead on his tracks whenever the player suddenly lifts off their finger from the directional left/right button, making him the least slippery character to play as.

A pink chipmunk with a big red bow on her head. First appeared as a Damsel in Distress in HTFA 1, then became playable starting from HTFA 2 onwards. Like Petunia, she runs faster than average characters.

A purple beaver who first appeared in HTFA 1 as a pilot of a spaceship that he uses to pick up the heroes and Giggles in order to escape the self-destructing lair. He became playable starting from HTFA 2 onwards. Being a beaver, he can handle being underwater better compared to other characters.

This covers playable characters that are simply additions to the standard six in certain games. Other games like HTF Origins (if any) may also have these characters as the only playable ones.

Tropes applied to these characters:

A pair of sentient ships that are playable in the underwater and outer space levels in HTFA 2. In HTFA 4 and 6, only TwinBee himself appears, and he is not playable. 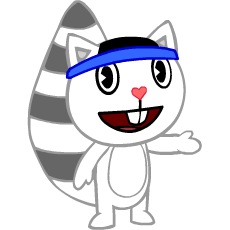 A white lemur wearing a blue headband. Loves peace, yet is willing to participate in wars. Only appears in HTF Origins and HTFA 5, the latter being a NPC. 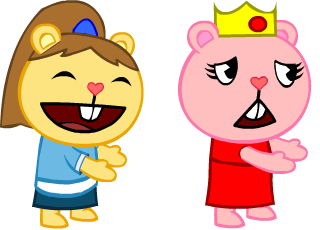 A yellow bear with brown hair tied in a ponytail and wears light blue shirt, and dark blue skirt. Most of the time, she appears in her princess form, which has her fur color being pink and wearing a crown (her Transformation Trinket) and red dress. She rules the Happy Tree Kingdom and most of the time shares the same role as Peach from Super Mario Bros., thus becoming Bowser's favorite target in this series. 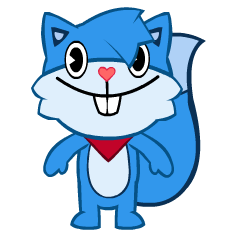 A blue and white arctic fox that wears a red bandanna around his neck. Only notable for having a single game appearance, in HTFA 6. There, he can be fought as one of the bosses, which after defeating him allows him to join your party. Like Flaky, he's a high jumper.

In the hands of his creator, he's now a completely original character not tied to HTF.

A child prodigy from the Digimon universe. For some reason, he appears in HTF form (a purple, half-dressed cartoon squirrel). He only appears in HTFA 6, where he's the only male character so far to be capable of running faster than most other playable characters. He can only become playable if you've beaten the first third of the game. 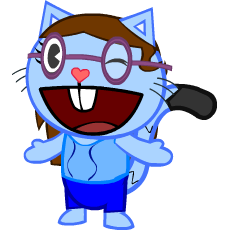 A light blue cat with long brown hair, magenta glasses, light blue tank top, and dark blue pants. She usually appears alongside Tacho, as both often assist the heroes in one way or another. Design-wise, by HTF standards, she has the most complex design.

While she was semi-playable in a single section in HTFA 5 (only limited to jumping), she became fully playable in HTFA Land. 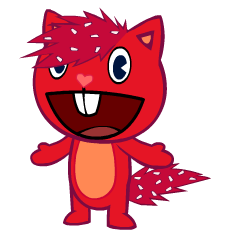 A dark red wolf with dandruff on his hair and tail. He usually appears alongside Neena as NPCs. He's later playable in HTFA Land.