The characters of the game and anime series, Hakuouki. Names are in the traditional eastern order; that is, last name before first name.

Chizuru is a young girl who came to Kyoto disguised as a boy in search of her missing father, an accomplished doctor of western medicine with whom she suddenly lost contact several months ago.

When the Shinsengumi reveal that they too have been in search of Dr. Yukimura, they allow Chizuru to remain under their care and assist them with the search. Agreeing to continue living as a boy so as not to distract the men who serve her new benefactors, Chizuru quickly becomes acclimated to their lifestyle, even working for them as an occasional messenger and healer.

Vice Commander of the Shinsengumi. He takes care of most of its technical affairs and is said to hold the real power. Very dedicated to the Commander, Kondou.

Commander of the Shinsengumi. A rather likeable and even humble person.

Also known as Yamanami Keisuke in history. He is the General Secretary of the Shinsengumi.

Captain of the first squad in the Shinsengumi. His loyalties lie with Kondou alone.

The serious and reserved captain of the third squad in the Shinsengumi. He is also a kenjutsu instructor and is actually the preferred instructor among the lower ranks, as he is the most patient one.

Captain of the eighth unit.

Captain of the tenth unit. 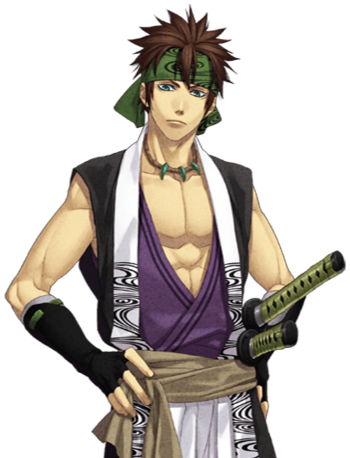 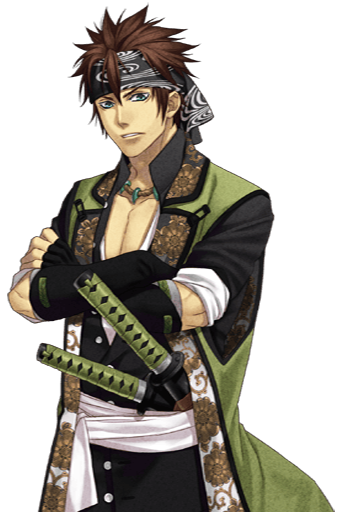 Cheery captain in Shinsengumi, Kondou Faction. He is also a kenjutsu instructor.

Captain of the sixth unit.

A character introduced in Hakuouki Shinkai. A later recruit to the Shinsengumi, Souma was born into an actual samurai family, but has been disillusioned by the so-called "true samurai" around him and yearns to find what it really means to be a samurai.

A character introduced in Hakuoku Shinkai. He joins at the same time as Souma.

A pure-blood demon and head of the Kazama family, working alongside imperialist forces to repay a clan debt to the Satsuma domain despite looking down on humans. His role in the story depends on the route chosen by the player, and he is the only potential love interest who is not a member of the Shinsengumi. Really wants Chizuru to have his babies.

A bannerman of the shogunate, he's been entrusted with guarding and attending the shogun. Though not an official member of the Shinsengumi, he has been an acquaintance since their time in Edo, and he idolizes Hijikata.

Taken in by Serizawa, Ryuunosuke is the player character in Reimeiroku. Brash and slightly immature.

Head of the Serizawa faction of the Roshigumi (what the Shinsengumi was called before it was the Shinsengumi). An extremely harsh yet very competent leader.

A strong guardian who seeks out to find a way to save Yasehime, who is under a coma, while at the same time, carrying another mission – to stop the demons involvement with the humans. Thus, she departs on her journey. She is actually the younger sister of Yasehime, and has an ability to absorb the Life Force of other demons.

The Head of Kyuushuu, a more brash and hotheaded of the chiefs. His weapon is a flaming sword. He warms up to everyone fast, and can be a bit of an idiot at times. Working with the Shimazu.

The Head of Mutsu, a laconic, emotionless guy. More serious and quiet guys, but he can be pretty reckless at times. Working with the Tokugawa, to free his clan from Date Masamune.

He is the oldest of the ten leaders, the "big brother" character type at first. He is reliable and protects his friends and allies. He fights with his fist. Working as a bodyguard of Ishida Mitsunari by the request of someone(revealed later as Hideie), to get lands for his clan.

The Demon Head of China. His family has been worshipped as gods, so he's arrogant and condescending guy. He enjoys messing with people, but he does care about others. He fights with enchanted threads.

The Head of the Hatsushimoo Clan, a clan that had been exiled due to Sins of Our Fathers and hopes to rejoin the Ten-Demon alliance. a bit of a chip on his shoulder.

One of the three Demon Elders and a part of the Ten Demon Alliance. Younger than the other three, he trained Yukina in swordsmanship and martial arts.

With her elder brother, Sousuke, she manages the dojo left to them by their late father. Embroiled in a certain tragedy when Sousuke died protecting her from an intruder - a white-haired monster in a blue haori - she resolves to take up the sword to avenge her brother.

After losing his teacher in the Ansei Purge, he became a Choshu samurai and joined the isolationist movement. As a team leader he is a people-magnet and has a clumsy and childish personality.

He is from the Choshu isolationist movement. He comes from Choshu and is a person who doesn't like conflicts and loves his country and fellow men.

A disciple of Takechi Hanpeita. Although he is always wearing a smiling face, he once tried to take the life of Takechi, and has a murderous side to him.

A mysterious foreign weapons merchant and a gentleman whose actions and words occasionally cast a deep and mysterious impression.

One of the new characters appearing in Akatsuki no Shirabe.

One of the new characters appearing in Akatsuki no Shirabe.

Kozue's elder brother who carries on the legacy of his father's dojo. A tender-hearted youth. He was murdered by a fury wearing the Shinsengumi's iconic blue haori. His death is what drives Kozue to hunt down his killer.

A student of Shyoukasonjyuku, excellent in military power and leadership. A man of high pride who will not bend his own will. He joins the cavalry.

A student of Shyoukasonjyuku. An honest person with a sharp mind. Considers Takasugi as a worthy opponent and best friend.

A student of Shyoukasonjyuku. Has experience from his voyage to England. Although he is a frank person with integrity, he has a masculine side of him and is quite playful.

A teacher of Shyoukasonjyuku and Takasugi. He was executed during the Ansei Purge. A person of good nature.

Okada's teacher and the Chief of the Tosa Domain Alliance. Has a reputation for a sincere personality. However, for some reason he also holds an enigmatic side.

A shogun's escort and the ringleader of the Roshigumi, who holds a resentment for the shogunate and the Shinsengumi