This is a partial character sheet for Haikyuu!!, containing characters from different schools around the Miyagi Prefecture, where Karasuno High is located. These schools compete among each other to determine the representative for Nationals.

Spoilers from Seasons 1-3 of the anime are unmarked. 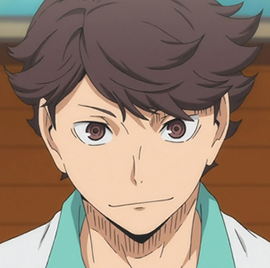 Position: Setter
Height/Weight: 184.3cm/72.2kg
3rd Year
"Spikers are all different. Once you're able to bring out 100% of the strengths of each and every one of them, that's when you'll be a true setter!"

Oikawa is the captain of Aoba Johsai's volleyball team and is widely regarded as the ace setter. A former member and setter of Kitagawa Daiichi, he won the "Best Setter Award" in the Miyagi prefecture during his third year in junior high.

Favorite food: Milk bread.
Current concern: When he tried to talk to Karasuno's manager, Shimizu, he got utterly ignored. (But she must just have been shy, and it's not like he's all that bothered by it, not even a little bit, not at all - Oikawa said to himself.)
Hajime Iwaizumi 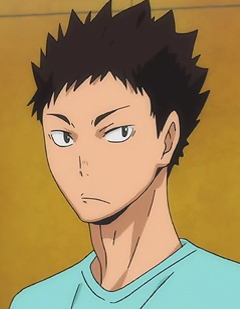 Position: Wing Spiker
Height/Weight: 179.3cm/70.2kg
3rd Year
"Someone who can't see the opponent standing right in front of him, can't defeat the opponent that lies beyond!"

The ace spiker for Aoba Johsai. Iwaizumi is a close friend of Oikawa, the two seem to have a deep sense of trust in each other. However, Iwaizumi does not approve of Oikawa's more childish antics and often prevents him from doing petty acts. 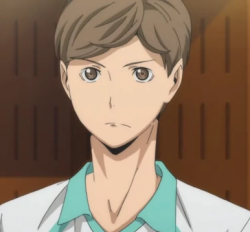 A second year and reserve setter. He takes Oikawa's place in the practice match against Karasuno since the third year was recovering from a knee injury at the time. Afterward, he acts as a pinch server in official matches. 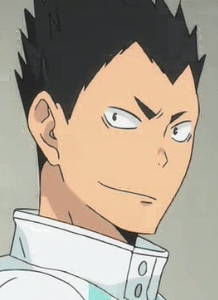 Kindaichi is a middle blocker from Aoba Johsai. He is also one of Kageyama’s former teammates from Kitagawa Daiichi. Because of Kageyama’s difficult temper during middle school, Kindaichi used to clash with him a lot and still thinks poorly of him. 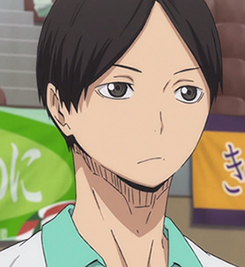 One of Kageyama's teammates back in Kitagawa Daiichi. 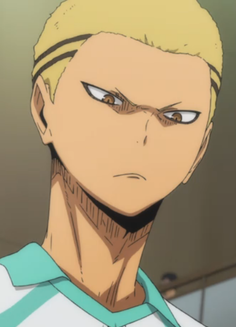 A player from Aoba Johsai, nicknamed "Mad Dog" by Oikawa. He was rather famous in junior high, and has the best skills of his grade, but is a very difficult person to deal with. 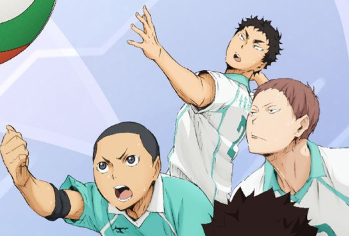 Other notable members of Aoba Johsai who make up te rest of the starting lineup. Wing spiker Hanamaki and middle blocker Matsukawa are third years, while libero Watari is in his second year. 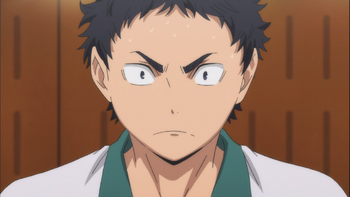 The captain of Date Tech during the Interhigh Preliminary tournament. After Date Tech's defeat against Karasuno, Moniwa retires as the captain and passes the baton to Futakuchi. 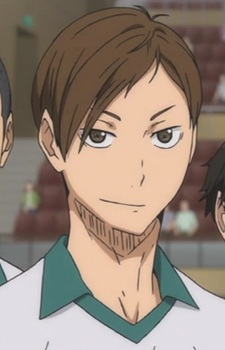 A wing spiker from Date Tech, often seen with Aone. Futakuchi is an easygoing young man that is considered a rather problematic underclassman by his upperclassmen.

Favourite food: Sour gummies.
Current concern: He has to go and get his wisdom teeth pulled.
Takanobu Aone 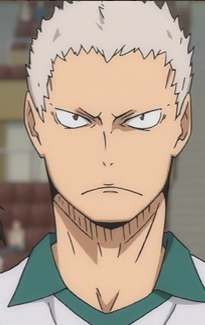 Position: Middle Blocker
Height/Weight: 191.8cm/88.2kg
2nd Year
"Those who are tall and strong aren't the only opponents who are difficult to block."

A middle blocker from Date Tech. Aone is a vital part of the "Iron Wall" — Date's impressive “wall” of defense.

Favourite food: Kuri kinton.note Candied chestnuts and sweet potato
Current concern: When he's riding the train nobody wants to sit on either side of him.
Kanji Koganegawa 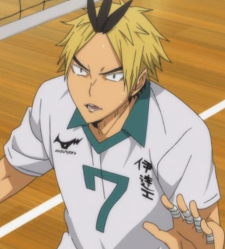 A relatively new setter after the third years retired. He's an energetic but well-meaning guy. 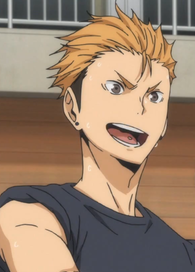 The new captain of Johzenji's volleyball academy, whose childish personality and carefree leadership style clash with the school's established "simplicity and fortitude." 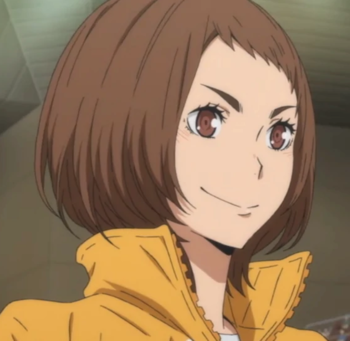 The manager of Johzenji High. Unlike the retired third year players, she stayed with the team for their Spring High campaign. 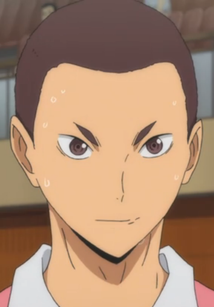 Captain of Wakutani South. Like Hinata, he is on the shorter side; his play style is said to be similar to the Little Giant's.

Favorite food: Zunda mochi.note Traditional dessert made of mochi and mashed edamame beans.
Current concern: He feels like his father's hairline is retreating day by day.

Ushijima is a wing spiker and also the ace of the strongest school in the prefecture, Shiratorizawa.

Shiratorizawa's former official setter, who was replaced by Shirabu sometime before the Spring High Preliminaries. He gets called in as the pinch server when needed.

A middle blocker from Shiratorizawa with a lax personality.

Favorite food: Chocolate ice cream.
Current concern: None of his teammates want to talk to him about Shounen Jump.
Tsutomu Goshiki

Position: Wing Spiker
Height/Weight: 181.5cm/69.5kg
1st Year
"Only those able to pull off miracles can be called aces."

One of Shiratorizawa's wing spikers, he's an emotional freshman who's eager to do well.

The elderly head coach of Shiratorizawa who believes that "simple is best". He played volleyball as a student but wasn't put in matches due to his short height — this is why he prioritises overwhelming power in his team and shows some resentment to Hinata due to seeing himself in the first year.

Current Concern: It seems to him that there are now fewer students who are independent. 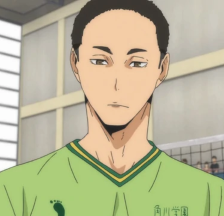 Kakugawa's relatively new wing spiker who boasts a height of over 200cm. 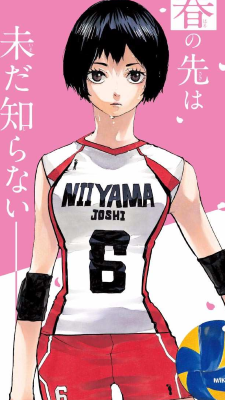 A childhood friend of Tanaka. She's a regular on the team and plays wing spiker. 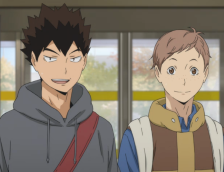 Hinata's friends from middle school who helped him out in their only volleyball match together against Kitagawa Daiichi in the prologue. They were on the tennis and basketball teams, respectively.