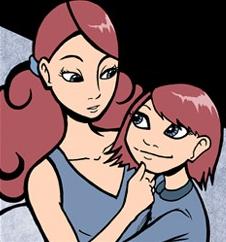 Annie's late mother; she passed on two weeks prior to the start of the story.

Like her daughter, she was educated at Gunnerkrigg Court. In her first year, she was placed in Chester House — unofficially the house for Etheric beings and other “weirdos” — where she befriended classmates Anja and Brinnie. The Court then revised its opinion and moved Surma to Queslett House for her second year and the remainder of her career at the Court.

Surma's friendship with Anja paralleled the one that their daughters would eventually have; through Anja, Surma met and befriended Donald Donlan, James Eglamore, and Anthony Carver.

Young Surma was a free spirit, with the personality to match her hair and the savvy to break rules without getting caught. She also had etheric talents: Annie's ability to see psychopomps was inherited from her mum, and presumably Annie's other psychic abilities were as well. Surma maneuvered these talents into a position as the Court's Medium, and built up particularly good rapport with the people of Gillitie Wood.

Surma and James Eglamore dated for a time, but she eventually married Anthony Carver instead. Some time not long after, the Carvers left the Court. In her absence, the Court didn't train any new Medium to replace her for over twelve years, and no more humans were invited to visit Gillitie during this time.

She remained bedridden at Good Hope Hospital after Annie's birth, and as her daughter grew older, Surma grew weaker. Mother and daughter were very close — in fact, a promise from Surma to “never send you into danger” was enough to convince young Annie to face down a spectral inferno.

During the time they had together, Surma gave Annie as much of an education — in topics both mundane and etheric — as she could. Before passing, she made arrangements for her daughter to continue her education at the Court. 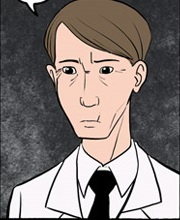 Annie's father; like Surma, notable for his absence. In a story full of mysteries, he's one of the biggest ones.

What is known about Tony: He attended the Court, and was in Queslett House, the same year as Surma. He and Surma married and left the Court, and did not maintain contact with their friends/acquaintances who remained. He worked as a surgeon at Good Hope hospital, the same hospital where his daughter was born and his wife was bedridden. For twelve years, he searched in vain for a way to save Surma from impending death. Shortly after his daughter's enrollment at the Court, he quit his job at Good Hope and completely dropped off the map.

What others have said about him has not been positive: Donald Donlan says that his disappearance has precedent — that he had a habit of taking off on his own for months at a time without telling anyone. James Eglamore (who admittedly may not be completely impartial) claims that he had always been selfish. Jones (another possibly unreliable source, as she admitted to deliberately trying to provoke Annie with this information) claimed that he was completely devoid of emotion and that he rejected anything — such as his wife's skills as a Medium — that wouldn't permit a scientific explanation. Reynardine (incapable of lying, but not necessarily a good judge of character) stated that Tony was incapable of love, or of experiencing anything besides disdain. It's painfully (mostly, for Annie) evident that he's very bad at communicating with people.

Prior to Chapter 37, he only appeared in-comic twice, both in flashbacks. In the first, he was present for a group photo alongside Surma, Anja, Brinnie, Donald, and James. He declined to join James and Donald for lunch immediately afterwards, claiming he had “matters to attend to.” In the second, he was crying at his wife's bedside; he composed himself and silently left the room upon realizing that his daughter was watching. The chapter proper has Donald, apparently his closest friend, reveal the personality hidden beneath his usual stoic mask.

Annie's relationship with her dad is similarly a big question mark, one that Tom has yet to answer any questions about. For what it's worth, Annie said that he must have a good reason for having disappeared, and fully expected him to return for her at the end of the first school year, which he failed to do. Annie's narration stated that it would be over two years from that point in time before Tony contacted her. 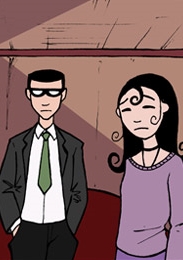 Kat's parents. Both of them are science teachers and magicians.

When they were younger, both attended school at the Court. Like Surma, Anja spent her first year in Chester and was subsequently transferred to Queslett. She was close friends with Surma, a friendship that mirrored the one her daughter would eventually have with Surma's daughter. Donald was a Queslett student from the start, and a friend of James and Anthony. Upon becoming classmates, Anja and Donald hit off almost immediately, dated steadily through school, eventually wed, and have remained Happily Married since.

Anja possesses etheric powers — she's demonstrated subtle clairvoyance and the ability to project barriers — but does not like to use them in public, due to having been on the receiving end of anti-etheric prejudice in the past. She and Donald did, however, collaborate on building a Magitek computer, capable of projecting shields and binding Reynardine. Kat was completely unaware that they had these talents.

So far, Anja and Donald have been supportive of all of their daughter's adventuring that they know about. They've also tried to help Annie upon learning of her Parental Abandonment; Annie has so far turned them down. 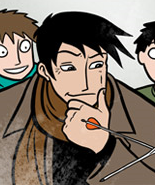 Games teacher, Dragon Slayer, and valiant Knight in Shining Armor. Eglamore was a childhood friend of Anthony, Donald, and Anja; he and Surma were more than friends. Kat has a huge crush on him.

It's possible that his desire to befriend Annie is interfering with his duty as a teacher; it's certain that his past with Surma is coloring how he treats Annie now. He'll lecture her or give her detention for breaking the rules, then in the next breath, encourage her to try harder to not get caught in the future. He dislikes Anthony Carver, mostly because he ended up marrying Surma.

In spite of this, he's yet to do anything to earn the ire that Annie feels towards him... at least as far as he's concerned. Annie seems to think he went over-the-top in his treatment of Reynardine, as the then-"dragon" showed up in front of her half dead and in pain, and she later saw Eglamore putting him back in captivity with his wounds still bleeding and untreated. For Eglamore's part, he hated Reynardine for killing his old friend, Sivo (said “dragon.”) The fact that Rey once competed for Surma's heart probably doesn't help, either. Antimony thought he has something going on with Jones, he also stated in the flashback that he wanted Jones in their group picture but she couldn't participate since Surma couldn't stand her.

He has at least two BFSes. One of them glows. His armour is blazoned with an alchemical symbol for lead. 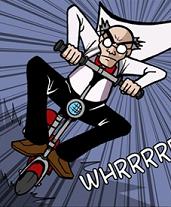 A Large Ham who has a Top Secret Doctorate, he teaches the coolest class at Gunnerkrigg: a full-sensory pulp sci-fi space battle simulator. The Troperrific plot of the simulation seems to runs on Rule of Cool rather than logic, which nearly proves too much for Annie's Willing Suspension of Disbelief.

On a prior version of the Cast Page, Annie described him as "The saviour of the universe, apparently"; presumably she was being sarcastic.

Outside of the classroom, he has a love for B-movies (particularly sci-fi or anything with Vincent Price) and he's infatuated with Jones. 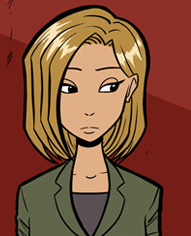 A highly enigmatic and emotionless lady who teaches mediation to future Mediums, “currently, amongst other things.” She's knowledgeable about the Court, the Wood, their history, and other unusual subjects. She has a keen eye for observing crucial details, and she isn't above provoking people to reveal their character. And calmly confirms it when caught. She's not interested in speculation, and tells Annie to only inform her of events regarding the court's history when enough information has been gathered.

While she is employed by the Court, she is deliberately neutral when speaking of the conflict between the Court and the Wood. Her role is, in the words of Coyote, that of a "Wandering Eye".

She has a long, ambiguous history with both the Court and the Wood. She knew Annie and Kat's parents when they were students at the Court (Eglamore wished that Jones could have been in their group photo, but Surma apparently couldn't stand her). She's one of the few people able to walk into Gillitie uninvited without getting killed.

Though more of a diplomat than a warrior, Jones can beat men twice her size in single combat, and with style. Because of this, and because of her personality and physical density (she can punch through a stone wall and sinks in water like a rock), Annie suspected Jones of being a robot, until Reynardine, Kat and Jones herself shot this particular notion down. She remains Ambiguously Human.

There's a very strong bond between her and Eglamore, whom she's known for a few very long time. She's also been on at least one date with Randy Disaster.

Almost constantly wears a seemingly bored Seen It All face (when she once confessed she'd "seen... nothing quite like that", this was treated as disturbing in and of itself). She's also quite beautiful: note that her face is penciled more elaborately than the protagonist's, so it's a deliberate point. 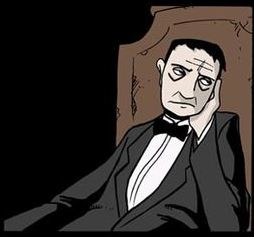 The rarely-seen-in-story head of the school. He presided over a meeting with ambassadors from Gillitie—the first such meeting in over a decade—acting visibly bored and irritated all the while. Physically, he appeared weak and unwell, with an unnaturally pallid, sunken complexion.

He has a daughter in Annie's class, named Janet.

Juliette and Arthur
A fine lady in glasses working in the Court (security, operating "ether stations"), and her humanoid robot friend. When idle, they amuse themselves by playing amateur theater without viewers.

Aata
A mysterious and rarely seen person. Aata is the highest ranked member of the Shadow Men seen to date and can speak for the Court

Bob and Marcia
The keepers of Young's Park. Bob is also the one in charge of the Decontamination Habitats.

Advertisement:
Bugsy
A former fairy who "teaches" students in Foley House, after graduating from Foley House herself. Her students used to live in the forest, just as she once did.