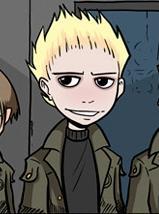 A classmate of Annie and Kat's.

In Year 7, he was loud-mouthed, and enjoyed drawing attention to himself by bullying or belittling others, targeting new students and those without anyone to defend them. Annie judo-flipped him once to defend Kat; he left them alone afterwards.

In Year 8, he has cooled down, and gets along with his classmates without incident. Except for Janet (see below), who he makes a big show of disagreeing with — to hide the fact that they're dating.

In Year 9, he really has mellowed out.

He does recognize (and praise) awesome moments when he sees them. He's evidently quite skilled at archery; in a competition, he and Janet were the two finalists, though she seems to have a slight edge on him.

His name is a reference to the Scottish folk song "Willie O'Winsbury". 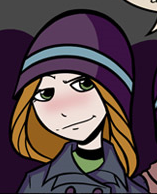 A girl who lapses into a strong Celtic accent when she gets angry, which seems to be her default reaction to distractions. She's the Headmaster's daughter, so it's possible she's had prior exposure to supernatural weirdness (which would explain her non-reaction to Mort). She is very good with bow and arrow, to the point of intercepting one of Winsbury's arrows in flight.
For extra Hidden Depths points, she quotes

William Shakespeare, and not one of the best-known works, but Timon of Athens.

As mentioned above, she's dating Winsbury; they kept it a secret from the other students, but eventually came clean, just to find out that nobody believed them.

A girl from Galicia, Spain. She loves animals, and can even talk to them. She works at a veterinary lab in the Court which, in addition to treating animals, performs animal research. Her explanation for this seeming disparity is that she works to make lives of the lab animals as comfortable as possible, and to ensure that all the ethical guidelines for animal testing are followed.

Paz was the first student that Mort was able to scare (following Annie's advice). She doesn't like clowns (though, as Annie noted, nobody does.)

Astute Spanish-speaking readers may notice that Paz's Spanish grammar is occasionally off; Tom Siddell has said this is intentional

, as Paz is supposed to be “a Galician hick 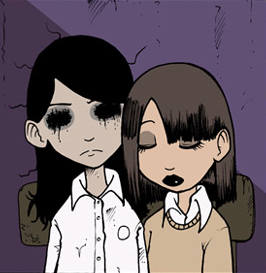 Zimmy is human "for all intents and purposes", but her mind is in tune with the Ether. This is not a good fit. The resulting stress causes a number of physical and psychological effects: She never sleeps, and has some kind of black gunk perpetually covering her red eyes. At the best of times, she feels like there's static in her head; at worse times she sees terrifying hallucinations that, if left untreated, become real; and really bad flareups will mentally transport her and those around her to some other place resembling a nightmare city. If there is any way to control these powers, she is unaware of it. She has difficulty distinguishing memories from ongoing events, or real people from the faceless "Nobodies" of her nightmares; on occasion she'll forget who she is, and spontaneously assume the personality of someone else. In short, she is a walking, talking embodiment of Psychological Horror and Mind Screw.

Understandably, these hardships have left Zimmy paranoid and perpetually on-edge. Underneath her outward hostility, she loves Gamma very much (and she lies to Gamma to make sure she doesn't leave). It's doubtful that Zimmy cares about anyone in the world besides Gamma, but she is capable of kindness and empathy, at least towards those who help her or Gamma.

Her real first name is Zeta. Reynardine calls her a demon, and is afraid to go near her.

Gamma Czarnecki is a slightly older Polish girl who is Zimmy's best (and only, apparently) friend. She's shy and weary due to sleep deprivation, but kind and friendly. Good thing, too, because she's the only thing keeping Zimmy alive and (relatively) sane: Her presence relieves the etheric stress on Zimmy's mind, nullifying Zimmy's powers and giving Zimmy a slightly better grasp of reality. But Gamma's stabilizing power doesn't work as well when she's asleep, so she wears herself thin trying to stay up with Zimmy. Lack of sleep is also the most likely explanation for those dark circles around her eyes.

Zimmy and Gamma are telepathically linked; in fact, this is the only way they can communicate, as Gamma doesn't know English and Zimmy doesn't know Polish, meaning that Gamma also relies on Zimmy to translate for her at Gunnerkrigg.

The girls are in Chester House, which is apparently stigmatized by many other Court students.

Tropes associated with both of them: 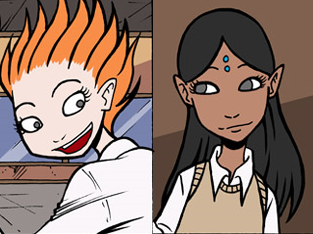 Two Regional Fairies who become humans. Prior to entering the Court, they didn't even have names. Red was the first to get her name when Annie accidentally gave it to her. The other was called "Blue" (by the fans and the characters) just for convenience and thematic sake, but was later named Ayilu.

Annie first meets them on the Forest side of the Annan Waters; almost immediately they ask her to squish them with a rock. Dying is the last test they have to pass to gain human bodies and enroll at the Court, and they're not allowed to kill themselves. Annie dubs them Suicide Fairies (on the Cast Page) as a result.

Annie meets them again, after their Metamorphosis, several months later. Red is distraught because her hair doesn't stand up anymore, and consequently, Ayilu will no longer be her friend. A visit to the barber sets things straight.

As The Fair Folk, both girls are largely lacking in tact and empathy. Red has a mercurial personality, bordering on psychotic, while Ayilu's personality is more subdued, but no less capricious.

Red and Ayilu are in Foley House, which is apparently reserved for Suicide Fairies and other Gillitie emigrants; according to Jones, this is to keep the emigrants from being "named" by accident by ordinary people, as emigrants are only supposed to receive a name once they graduate.

Tropes associated with both of them:

Kat's first boyfriend. When he arrives at the Court it's announced that he'll only be there a week. In spite of knowing in the backs of their minds that the relationship can't last, he and Kat spend the week talking and holding hands. Kat even tries makeup for the first time so she can look nice for him.

When the end of the week rolls around, he mutes to go away to Gillitie Wood with his parents. "And she never saw him again." 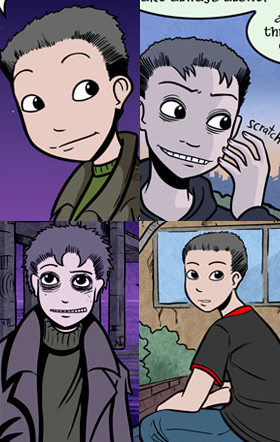 A student from Queslett South who is easily Annie and Kat's equal in curiosity. He's made a hobby of hacking the security system's motion detectors and exploring the Court after curfew. He also has an impish streak, and a Cheshire Cat Grin and very expressive eyebrows to match.

He's the son of

a student who was on very bad terms with Surma, Anja, and their friends

, which he is either unaware of or dishonest about to Annie 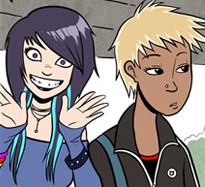 Parley's companions at Thornhill. They make an appearance in Chapter 35: Parley And Smitty Are In This One. 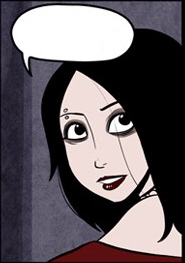 A girl who appears in chapter 49 as Jack's girlfriend. Initially mistaken (both in-universe and out) for Zimmy, it's later revealed that she is an apprentice witch. She uses Westcountry slang, such as referring to Annie as "my love."

A Jackalope from Gillitie Wood who came to Gunnerkrigg Court, becoming a human student.