List of all other characters in Gungrave (MAJOR Spoilers for both the video game series and the anime adaptation!) 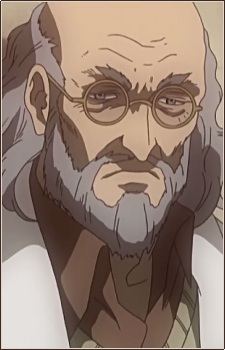 "All the blood in his [Grave's] body must be periodically replaced. He got that body, designed for slaughter—in exchange for his soul."

A genius scientist, Dr. Tokioka is also the twin brother of Tokioka, Big Daddy's butler. A pensive old man but with a streak of kindness underneath, he is Grave's "creator" and only ally.In the anime he drives a semi-truck which acts as their base of operations, and is also loaded with the necessary life-support systems needed for sustaining Grave's body. In the video game, he and Grave reside in a small lab hidden deep within the lowest stratum of the city.

It should be noted that in the anime, Brandon requested the doctor to necrolize him in the event of his death, in the video game that's not quite the case. When Brandon died and Harry took over, Harry's new "Family" wanted Brandon's corpse to be used as a guinea pig. They figured if they could resurrect Brandon as a Deadman under their control (Brandon was a highly-skilled sweeper after all), it would mean they would produce a loyal, immortal killing machine with no will of its own, and incapable of rebelling against them. The doctor was not going to have any of that, and he somehow managed to escape from the Family and go into hiding, taking a valuable piece of "equipment" with him—the body of Brandon, revived as "Grave" but retaining some degree of free will. However, Big Daddy did leave one instruction to the doctor before his death—the order to only awaken Grave when Maria and Mika need his protection.

As one of the geniuses behind the Necrolization Project, Dr. T. feels he has committed an irredeemable sin. He is stricken by feelings of guilt over his "cowardice" and "damning" Brandon by raising him from the dead as Grave. In both the anime and video game, he is killed. 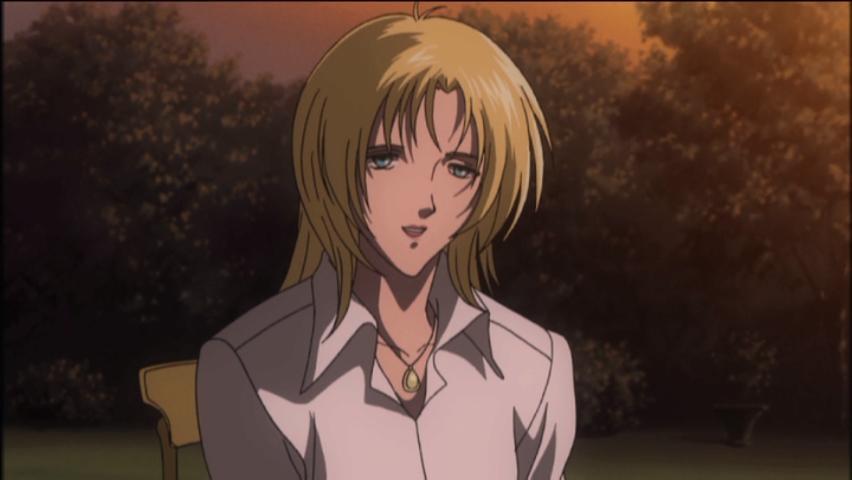 A blonde-haired woman who grew up in the same city as Brandon. To Brandon, she was his one true love, but Maria's foster parent Jester disapproved of their relationship. After the murder of Jester, she is taken by Big Daddy and his agents to his estate in order to protect her. After being rejected by Brandon, she became Big Daddy's lover and grew pregnant with his child (who will later become their daughter Mika). She was utterly devastated by the loss of Brandon, but was told that he was "alive" and was entrusted with the suitcase that held the Cerberus weapons. She was instructed that if she ever was in dire straits, bringing the suitcase to Brandon will let him know she is in need of help. After the death of Big Daddy, she lived in a smaller home with Mika and Tokioka, until Harry sent out his agents with the order to have them killed. Maria sends Mika away with Tokioka with the suitcase, telling Mika to seek out Brandon's aid. Maria stays behind and stands her ground, fighting off the Millenion agents until they succeed in killing her.

In the video game Grave fights for Maria's daughter because of a promise Grave (as Brandon) and Maria made when they were still alive, and that promise is one of the few human memories that Grave can still remember.

Voiced by Kikuko Inoue in Japanese, by Michelle Ruff in the English dub of the anime and by Patricia Hannidez in the anime's Mexican Spanish dub. 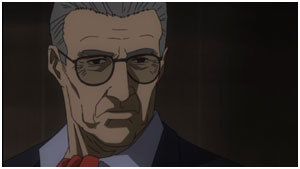 "Brandon, I have achieved everything I wanted in this lifetime, with this company. I have achieved my dream. It is time to slowly enjoy my life, with Maria and the child within her."

The leader and founder of Millenion. Despite Millenion being at its core organized crime, Big Daddy is a calm, kindly, if a bit lonely, old man who is respected by many. His outlook on life was to "find harmony in thought". He has a fondness for fishing, and when he began spending time with Brandon, he taught him how to fish and thought of Brandon as the son he never had. He created Millenion as a means to protect his friends and family, and his innermost circle of most trusted associates is called "The Family". To ensure that the Syndicate operates smoothly, he created "The Code of Iron": Traitors of the Syndicate can only receive the punishment of death.

He also wished for Brandon to do what he could to protect Maria and his unborn child, once Maria became pregnant. In the anime Big Daddy eventually confronted Harry after receiving a letter written by Brandon before his death. The confrontation ended with Harry murdering him, who flew into a rage and claims of Big Daddy "taking Brandon away from him". Though the circumstances are different between the game and the anime, it was Big Daddy that supposedly ordered the Doctor to "lock" away the necrolized Brandon, and allow him to sleep until his power is needed.

In the video game series, he is put through a series of experiments conducted by Harry after Brandon's death and disappearance. He exists as a twisted monstrosity at the very top of the Millenion's Tower, a completely mindless shell of his former self.

Voiced by Iemasa Kayumi in Japanese, by Michael McConnohie in the English dub and by Federico Romano in the Mexican Spanish dub.

"That was amazing sir, incredible beyond imagination!"

A supporting character who debuted in Overdose. Mika found the young boy, who was wearing dirty clothes and holding a sample of the Seed drug. He claims to have amnesia, but possesses incredible knowledge of Seed and the Necrolization Project. His genius allowed him to create a "seed seeker" a tiny creature composed of Seed which he and Mika use to detect and sense Seed. Spike often is at odds with Juji Kabane, who claims to smell "something not right about him".

Spike is really a creation of Garino's, built to serve as an obedient clone, but Spike rebelled and sought out Mika in a plan to use Grave against Garino. Unbeknownst to Spike, his senses were connected to Garino, who could witness everything Spike did and heard. Garino kills him in front of Mika and company, which drives Grave, Billy, and Juji into a berserk mode as they proceed to engage Garino in the final boss battle of the game. In the end, Mika buries Spike next to her mother's grave.

Despite his true intentions, he did help Mika by creating many of the gadgets and machinery used in Mika's semi-truck and helped her maintain Grave's body and functionality. He also is responsible for improving the functionality and power of Grave's Coffin, even giving the Coffin the name of "Death Hauler".

An ancient race of alien parasites whose visiting to the planet centuries ago sparked the events of the series. With intelligence and technology far beyond human reasoning, they only had one goal: to reproduce. However, to do so the parasites needed to take control of a host and transform it into a more effective form. Their technology is the backing force that produced not only the Necrolization Project, but the Seed Project and the Hybridoma Theory as well. Subjects infected with "seed", the substance derived from this alien lifeform, if their mental abilities are not strong enough to control the infection, the result is the Orgmen ("re-organized man"), mindless drones to the alien consciousness. When a host is infected, the seed begins to "analyze" its host to ascertain the most effective way of transformation. Usually only "pure" seed can cause the transformation of the host, so low-quality seed is sold as a designer drug.

Ultimately responsible for corrupting Harry MacDowell, and granting near-godlike powers to Garino Corsione. Seed and Methuselah are absent in the anime.

Anime-only character. He is Dr. Tokioka's twin brother who serves as Big Daddy's butler. After Big Daddy's death, he serves Maria and Mika. 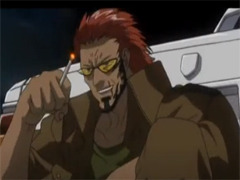 Anime-only character. He was imprisoned for killing 327 people, but after serving in the prison for eight years, he was released. He belonged to the Volcano organization, but he soon cut his connection to join Lightning after discovering the Necrolyzation project by Cannon Vulcan. 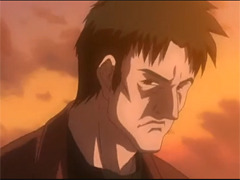 Anime-only character. He once fought alongside Blood War in the past. Out of ambition to return to the battlefield, he killed his father, sent Lee to work in Millennion to get informaion, and began the Necrolyzation project and spent seven years to develop it.

Anime-only character. He survives the Necrolyze accident, and is later found by Harry, Lee, and Bob in the ruined facility. He tells them about his review to Dr. T's Necrolyze research, which actually only complicates things because Necrolyze can be applied to living subjects (or so, he says). Then he offers to work under Harry, which Harry accepts. 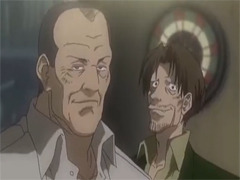 Anime-only characters. Gary and Widge worked as loan sharks for those who bet in the illegal race betting, and Widge often considered that position as the lowest position in the Millennion. In the present days, Gary and Widge decided to cut their connections to Millennion not only because the betting was now managed by modern computers, but also out of their loyalty to Big Daddy. Young Brandon worked under them.

Members of Brandon's and Harry's old gang. The five of them live together in the crime-ridden slums called 'Desolation Alley'. Unfortunately, they are all killed when the gang somehow picks a fight with Deed (whose brother is related to the mafia) and his gang.