The three main characters of Guilty Crown themselves.

"I'm dense? Maybe it's true that my mind works out of step with everyone else's. It's just that I don't know what to say to other people. So I hide my nervousness and try to go along with what they say. That's how I've made the pseudo friendships in my life."

An unsociable seventeen-year-old high school student at Tennouzu High School and a member of the modern motion picture research club, Shu gains the ability "Power of Kings," enabling him to extract weapons from other people, after a chance encounter with Idol Singer Inori Yuzuriha. 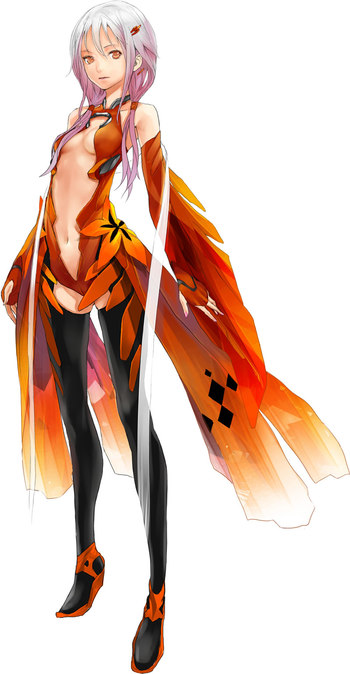 The popular internet Idol Singer of the band Egoist, who Shu is a fan of, sixteen-year-old Inori doubles as a member of the resistance group, Funeral Parlor. After a covert mission to steal the GHQ's Void Genome goes wrong and she ends up injured, Inori meets Shu and entrusts the Void Genome to him.

Her Void is an enormous sword with impressive cutting power and the power to shoot sword beams. She also seems to have the power to imbue the sword with other peoples' Voids. When extracted by Daath, it takes a more wing-like shape.

"Remember this, Shu Ouma: there are only two paths you can choose. You can sit quietly and be selected out of this world, or you can adapt and make a change!" 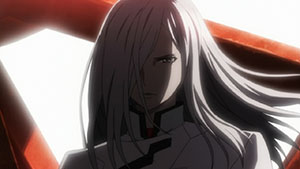 to see his revived self spoiler

The seventeen-year-old rebel leader of Funeral Parlor, Gai is described as Shu's rival and seeks to use Shu's "Power of Kings" to fight against the GHQ.

His Void is a gun that can unlock people's Voids.