Only story-relevant characters and bosses have spoiler marks - character folders for basic Mooks and other such beings are unmarked. You Have Been Warned.

The player characters. Each have their own distinct personality, but play no different from the other. They were abducted by Ominent to use as experiments for shrinking technology prior to the game.
In General
Advertisement:
Maxwell "Max" Smalls
Voiced by: Luke Youngblood 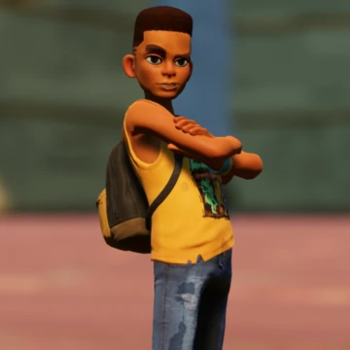 "Hey, nice to meet you. The name's Max. Maxwell Smalls!"
An easygoing and confident person with loads of charisma. He takes on an unofficial leader role within the group.
Willow Branch
Voiced by: Ozioma Akagha 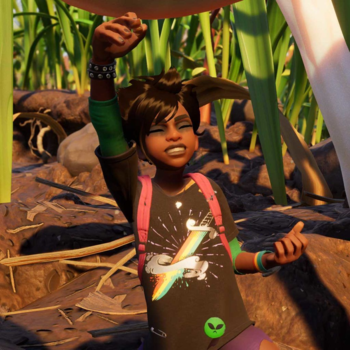 "Hi! My name's Willow. Nice to meet you."
The most sarcastic of the group, but also the kindest and most empathetic. Serves as The Heart.
Peter "Pete" Boggs
Voiced by: Max Mittleman 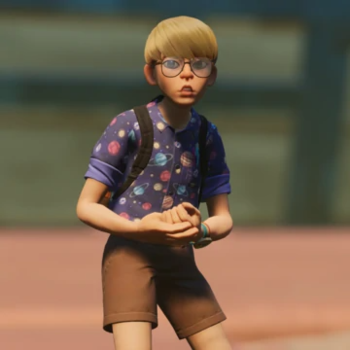 "My name's Peter...but you can call me Pete."
The Geek, and is often the butt of many jokes. Despite this, Pete is an endearing young man and is every bit as resourceful as the others.
Ally "Hoops" Nguyen
Voiced by: Charlotte Chung 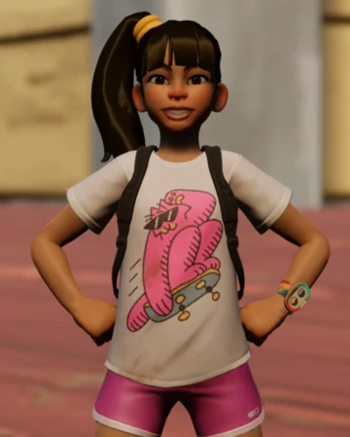 "Hoops here! Ready to mix it up?"
The most energetic and happy-go-lucky of the group, and endears herself to each of them. She serves as The Lancer as well as the group's source of optimism.
Advertisement: 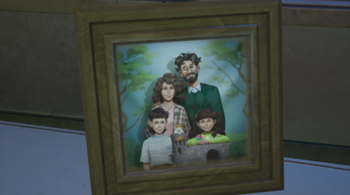 The Tully Family as seen in Wendell's Hedge Lab. Going Clockwise: Wendell, Sarah, Dan Hamster III, Thor, and Trudy.
The family of Wendell and the people who own the backyard. Various logs and files found in labs and other places detail Wendell's relationship with them.
Dr. Wendell Tully 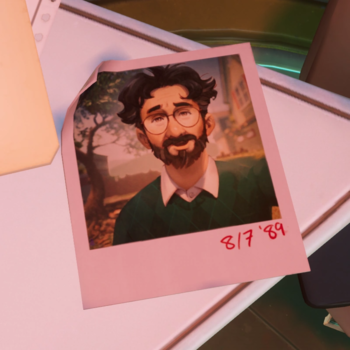 Wendell during 1989, a year before the game.
Voiced by: Zachary Levi
A brilliant scientist that was once part of Ominent Technologies. Although his motives and his connections to the teens' predicament are unknown, he invented the shrinking technology that kicks off the plot. He has been missing for several months since the start of the game. He owns the house and backyard that the game takes place in.
Trudy Tully 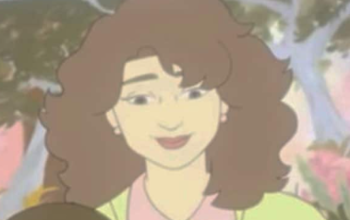 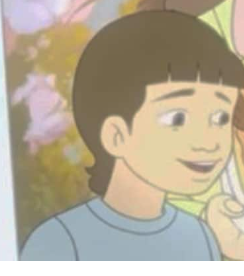 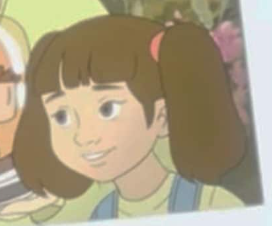 In General
The overarching tech company that (formally) contained the scientist who invented the shrinking technology which led to the kids being shrunken down.
Director Dalton Shmector 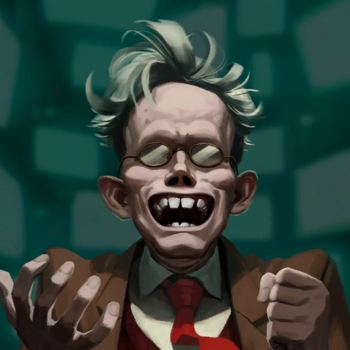 The director of the science division Dr. Wendell Tully worked for.
BURG.L

Voiced by: Josh Brener
A repurposed grilling robot that assists the player by providing advice and blueprints for more advanced crafting recipes.
TAYZ.T
A series of robots which defend the various labs from intruders... including the player.
ARC.R
An advanced variant of the TAYZ.T that has a devastating ranged attack, and more health.

In General
Red Ants/Black Ants/Fire Ants
Colonies of ants that have inhabited different areas of the backyard. Come in two varieties - the more common, naturally-neutralnote except for Fire Ants worker ants and the hardier, aggressive soldier ants that tend to stick closer to their anthills. While most worker ants are neutral to the player at first, they can be an early-game nuisance, sneaking into players encampments to eat their cooked food and steal from their chests if left unguarded or out in the open.
Antlion
Large, hostile bugs that have infested the Sandbox. Hit very hard and are one of the tougher enemies in the game, but thankfully are only found within the Sandbox biome.
Aphid
Tiny, rabbit-like creatures found almost everywhere in the yard. They can be tamed by letting them eat bowls of grass slurry, providing players with a stamina bonus while running. They are also a very common source of food.
Bee
A colony of bees that occasionally fly throughout the yard, pollenating flowers. They coalesce near the honey jar on the picnic table, and become aggressive against players who get too close.
Black Ox Beetle
A very sturdy and aggressive beetle that resides in the upper yard.
Bombardier Beetle
Large, hostile beetles found in various areas throughout the yard. Mostly a ranged combatant, attacking with boiling chemical shots from their Butt Cannon.
Firefly
Neutral flying bugs generally found in the lower areas of the yard, particularly near the swamps. When aggroed, they fly around the player, attacking them with ranged 'glow goo' splashes.
Gnat
Small, adorable fuzzballs that are attracted to light and the player. They can get annoying at times, but they're (usually) harmless. They can be tamed by repeatedly feeding them spoiled slurries made from spoiled food, and provide players with a bonus that increases how far they can glide with dandelion tufts. Their meat also acts as a common source of food. Infected variants exist within the Haze, although they don't actually harm the player but instead cause them to drop their tools when they bump into them.
Grub
Small, docile bugs that prefer to burrow underground near the Oak Tree and certain other areas of the backyard. Once dug up with a shovel, their hides can be harvested to make certain armor sets and weapons.
Ladybird
Tougher variants of the Ladybug found in the upper yard.
Ladybug
Large, neutral bugs that wander throughout the lower grasslands. When aggroed, they can charge at enemies like bulls and bash with their shells, dealing heavy damage. Infected variants can be found within the Haze biome and around the yard once it spreads, with one in particular serving as a mini-boss for the Haze Lab.
Larvae
The younger, more aggressive form of ladybugs and ladybirds, or possibly lacewing larvae. Found in various areas throughout the yard, with ladybird larvae showing up in the upper sections and infected variants showing up in the Haze.
Mites/Ticks
Various small but hostile insects commonly found in large groups. There are four distinct types - lawn mites found in the lower yard, infected mites in the Haze biome, dust mites around the shed and ticks found in the northeast upper yards, mostly around the large stump.
Mosquitos/Tiger Mosquitos
Flying bloodsuckers who lurk near the pond. Their tougher cousin, the Tiger Mosquito, lurks in the upper yard.
Moths
Nocturnal and extremely rare creatures, typically found snoozing in certain spots in the northeast section of the upper yard.
Roly-Poly
Common pill-bugs who live in the upper yard. Gentle and will leave the player alone unless attacked. Sickly, slightly-weaker variants can be found in the western areas of the lower yard.
Spiders
Various hostile spiders prowl the backyard in search of small prey, including shrunken teenagers. There are four main varieties - Orb Weaver Spiders (Argiope aurantia), Wolf Spiders (likely Rabidosa rabida), Diving Bell Spiders (Argyroneta aquatica) and Black Widow Spiders (Latrodectus), as well as young Spiderlings.
Stinkbugs/Green Shield Bugs
Large, hostile bugs usually located in areas with lots of dry grass. Often attacks foes by summoning large clouds of Deadly Gas.
Termites
A large colony of hostile termites that has infested the log pile near the shed in the backyard. Comes in worker and soldier varieties, similar to ants. A King Termite resides within the lower recesses of the log pile, guarding an optional BURG.L upgrade chip.
Water Boatman
Docile bugs that swim around in the koi pond and flee if attacked. Drop their fins on death, which are used to make a set of swimming fins for the player to increase their underwater movement speed.
Water Flea/Spiny Water Flea
Transparent creatures who reside in deep pools of water and drainage pipes throughout the yard. Their meat can be harvested and used as food.
Weevil
Docile insects that roam about various areas of the backyard. Can be tamed by feeding them mushroom slurry, which provides a bonus that slows the player's thirst drain. They are also another common source of food. Infected, hostile variants can be found within the Haze that sprint up to players and explode after a short period of time.

The Broodmother
A terrifying Demon Orb Weaver spider found in the Hedge. Responsible for the Hedge Lab’s spider infestation.
The Assistant Manager
A souped-up ARC.R found in the black ant lab. Acts as security for the various labs.
The Mantis
An orchid mantis located in a potted plant on the porch of the shed. It is the strongest enemy in the game.
The Experiment - MAJOR STORY SPOILERS 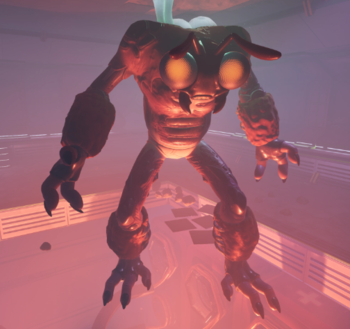 A mishmash of raw science, haze fungus, muscle sprouts and ant parts, created by Dr. Tully to function as a remote body he could control to continue his research. This backfired however when it regained its sentience, and now guards the inner sanctum of the Undershed Lab. Dubbed the Mant by Wendell after a creature from his son's playsets.
The Mastermind - MAJOR STORY SPOILERS
A robotic drone piloted by Director Schmector in order to kill the teens to prevent them from learning the cure to Dr. Tully’s Rasining problem.

The Bird
A Crow that occasionally visits the yard, landing in several spots around the map and dropping rare feathers.
The Koi Fish
A fish that resides and roams within the pond biome, acting as a constant threat to anyone who enters its waters.
Tadpoles
Docile aquatic creatures located exclusively in the koi pond. They are a common source of meat for food within the koi pond, which is also used in a few other crafting and cooking recipes.