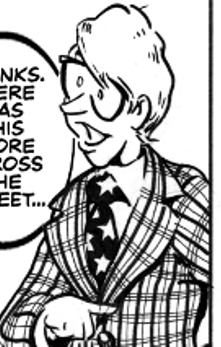 "There was this store right across the street.
A 39 year-old electrical engineer working for Sampson Enterprises. A very kind, considerate, understanding gentleman and one time tentmate of Phyllis Sampson on one of her adventures, with all that implied. One time lover of Eleanor's sister, Victoria, until an unfortunate incident involving the discombobulationotron 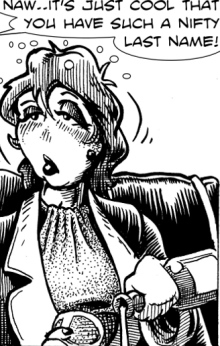 Before riding with Larry
Curvy, 39 year old, alcoholic artist, runaway housewife and mother of Dilbert Pipkin. Tipsily leaves one of Eleanor's infamous parties, only to be found hugging a lamppost by Larry Pye, who escorts her home, tucks her into her couch, kisses her good-night and makes a breakfast date for 4 in the afternoon. Frolicking ensued. Good friend and rehab-mate of Phyllis Sampson.
Stephanie 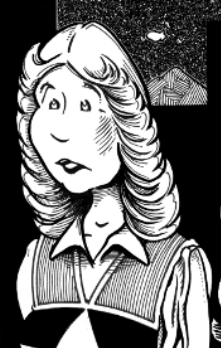 "Missus Sampson's dead and I need Larry to fix it."

robot girl (prefers the term humanichal.) Arrived in Innsmount via the discombobulationotron, losing much of her memory and at least one piece of herself (Edison's hangy down thingy) in the process. Works at Sampson Enterprises with her closest friend, Larry. Loves books and movies, especially those with kittens. Tends to childlike without being childish. 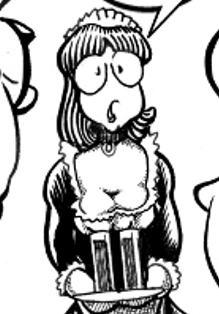 "Are you two laughing at me?"

Beloved children's librarian and sometime love slave of Eleanor. 35 years old, longtime chum of Larry, with whom she is in love. Also hot for Edison. Currently in a relationship with 15 y.o. Jacob Dublemann. Still looking for the lucky pork chop at the Tuesday night fish boil. 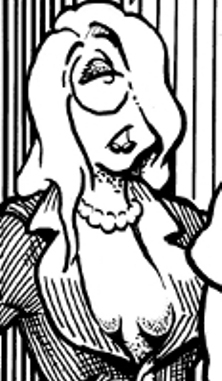 "Now then, Lawrence, a young lady, quite in her cups, has taken it upon herself to stagger home ALONE!"

Frequently angry, outspoken, transgender woman, in her late thirties, the owner of a local bookstore. Has two children, Iseult "Izzie", 15, and Tristan, 16, who are friendly with the Dubblemann twins. 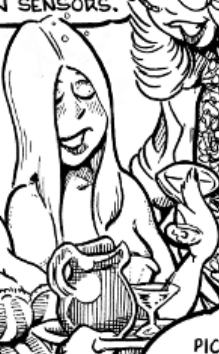 An older alcoholic woman, late wife of "Rad" Sampson, and one time adventure-buddy and tent-mate (with all that implied) of Larry's. Close friend and former rehab-mate of Edison. Died just before a return trip to rehab with Edison. 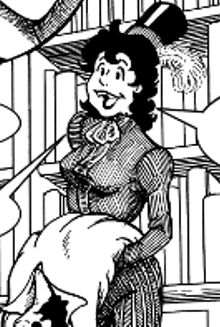 That's why the lady is a vamp(ire.)

Eleanor's sister, 35, a retired swimsuit model and Larry's ex-girlfriend. Has been missing for two years, pushed through her sister's discombobulationotron by Eleanor herself. Now a vampire, she bit Edison after pulling her into her own dimension.

20 year old, cute, blonde, former love slave to Eleanor, former body guard to Phyllis, now an assistant in the lab along with Larry and Stephanie. Taught her close friend, Steffie, how to smoke. Mostly does fetch and carry work in the lab.
Rad