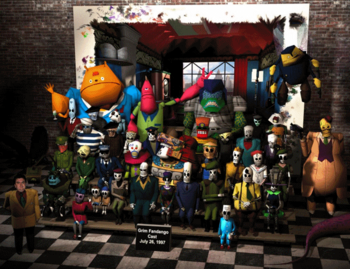 The cast of the game with their creator.
Advertisement:
open/close all folders
Main Characters

The hero of the game, a salesman in the Department of Death. He'd point out that he's technically a travel agent, selling travel packages to the dead depending on how good they were in life, but the job is functionally identical to being The Grim Reaper. Manny has to work off his moral debt to advance further into the afterlife, but he can only do that by selling good packages to good souls, and for some reason all his latest customers don't qualify. Suspecting that he'll be stuck in his crappy job forever, Manny grows increasingly miserable and desperate, finally stealing one of Domino Hurley's files and clients. This is Mercedes "Meche" Colomar, a genuinely good soul who, according to her bio and further questioning, is qualified for a straight ride to Number Nine. When Manny finds out she apparently has to go the long way despite this, he decides to straighten everything out, beginning a journey that changes the entirety of the underworld.

Manny's Love Interest and the catalyst of the game's events; her file was the one Manny stole. Meche is obviously a good, gentle person deserving a first-class travel package...which is why Manny is baffled when she seemingly qualifies for nothing better than a long walk.

Manny's friend and main ally. A demon (or as he says, "spirit of the land") with one purpose, desire and reason for living: driving, preferably really really fast. Also maintaining vehicles (when no driving jobs are available). He lives and works alone in the DoD's basement, unable to fully exercise his gifts, leaving him open to persuasion in matters of technically-prohibited upgrades...

Leader of a rebel movement against the villains, one of Manny's main allies. Salvador was once a Reaper and a salesman like Manny, and like Manny, discovered that even his most deserving clients rarely qualified for anything. Unlike Manny, Salvador quit his job in order to create an underground movement and overthrow the Department of Death's corrupt leadership. In the end, Salvador is revealed to have qualified for a Number Nine ticket rather than Reaperdom - like Meche, he was a saintly soul given an unjust punishment.

Owner of the Blue Casket in Rubacava, who has... interesting tastes in men. 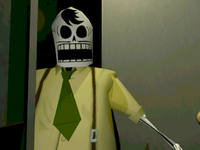 A foul-tempered middle manager in DoD and Manny's immediate superior

One of the two main villains. Manny's rival in the DoD, the boss's pet on the fast-track to promotion, the hottest salesman with the best clients and all-round smug shade-wearing jackass. He uses Manny's old, much larger and more luxurious office, and seems to find all the good souls that Manny doesn't - in the first chapter landing a nun with a golden ticket when Manny gets a "mean midget [he] had to send 'parcel post'" (i.e. stuff into a coffin full of packing foam). This is because he's in on the DoD conspiracy.

The main villain, the crime Lord of El Marrow who's behind the corruption in the DoD. He has been stealing tickets from the deserving and selling them to richer, less saintly souls. Or so he'd have them believe, but the tickets he sells are fake. He keeps the real ones for himself, determined to hoard enough to balance out his numerous and horrific misdeeds in life. 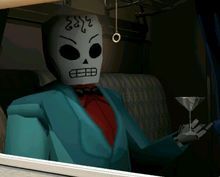 A corrupt lawyer in Rubacava. He is dating Olivia, who is also dating Maximino, who runs the town's giant cat racetrack - and the latter would be very, very upset if he learned about it. Virago is attempting to keep the relationship under wraps.

The guardian of the entrance to the Ninth Underworld, and the conductor of the Number Nine, who ruthlessly makes sure that only those who have earned a golden ticket are the ones allowed to use them.

A short, irritable man who becomes Manny's final client before meeting Meche, Bruno was the victim of a bad batch of gazpacho soup, and apparently lived such a poor life that he didn't even qualify for the Excelsior walking sticks. Rather than walking the whole way to the Ninth Underworld, he agrees to instead be shipped in one of the DOD coffins.

Manny's client in the game introduction, Celso Flores is a recent arrival in the Land Of the Dead, and learns of the workings of the afterlife alongside the player.

A pair of "angelitos", the souls of dead children, the Pugliano siblings are kept prisoner by Domino at the coral mine at the End Of the World, and unlike the other prisoners, he keeps them in a cage because of their wings, forcing them to carve lightbulbs from the glowing coral.

A wandering soul encountered by Manny and Glottis on the bottom of the Sea of Lament, Chepito is a former sailor who's death led to him prefering to walk across the ocean floor to the Ninth Underworld rather than setting foot on another boat.