This is a character sheet for the videogame Grey Goo, if you want to return to the game's main page, click here. 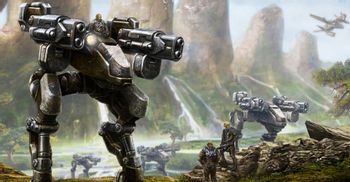 The Guardians Of Legacy
Known among their own kind as the Morra, these aliens are towering, four-armed beings and the last survivors of a cataclysm known as "the Silence." Built from the scraps of their last starship, the Beta colony on Ecosystem Nine is born out of necessity. Once a thriving culture, everything they craft is a reflection of their ultimate purpose: to defend their society from the chaos that threatens to consume it. Upon gathering catalyst, Nine's valuable resource, the Beta rely on their skycranes to transport supplies and construct their outposts. While highly mobile, Beta forces must connect these outposts to power hubs in order to establish their forces. Like the Beta's structures, their combat units value mobility. Beta units are expertly piloted by individual soldiers, but they are only as powerful as the hand of their commander. A skilled leader can construct multiple outposts in resource-rich or easily defensible locations to gain an advantage on the battlefield.

The Beta as a whole displays the following tropes:

"I'm not waiting for the Author to write my story."

While Saruk's father, Sagah, established the settlement on Ecosystem Nine to keep the Beta safe, Saruk seeks to return the Beta to the stars. He longs for the day that his people can reclaim their true calling as great explorers.

Having spent his lifetime hiding from the enemy that savaged his father's generation, Saruk is ready to attempt the unprecedented feat of manipulating the passageways, called keyholes, that have both protected and imprisoned his people on Nine.

Unsure of what may await his people in the stars, Saruk is determined that, whatever the cost, the Beta people remain the authors of their own fate.

"The most powerful force is an unexpected one."
Barca was the first child of the Beta born on Ecosystem Nine. He grew up in the hardest years when the colony of refugees was being established. Much of the current safety and comfort the Beta now enjoy is credited to the years of Barca's hard work.

Barca was protégé and friend to Sagah, and has served as a silent custodian to Saruk since Sagah's death. Many consider Barca to be the leader of the Beta, though officially no such title has ever been given to him. He often states the only throne he seeks is in the the shade of a taukur tree. He continues his service knowing the Beta have a long way to go before anyone can rest.

"We are not lost among the stars, merely off course for a time."

As a child, Alín showed enormous aptitude for multi-tasking. Early in her development she was able to perform multiple, complex tasks requiring all four limbs at once. This earned her high praise from both her parents and her instructors. She took her natural talent and applied it to helping the Beta colony by becoming the chief supplier for the Beta army, where she organizes deployments and supply drops.

Alín was married to Saruk's elder brother, Kre. After the accident that took his life, she remained close to Saruk. They quickly became good friends, supporting each other through their loss.

"Do not confuse my focus for blindness. I will come for you next."

Naiko is one of the four sons of Bas Kóro (called the Four Trees). While large by Beta standards, Naiko is the smallest of his brothers. As a child they would call him "niko," which means "peanut" or "little one".

Unlike most Beta, Naiko is a habitual single-tasker. His brothers would often say that "Naiko requires all four hands to kill a fly." With a shrug he would reply "I always kill the fly." While Naiko may exaggerate his deeds, he never lies.

The Architects of Destiny

After centuries of expanding into the far reaches of the Galaxy, Humanity discovers only darkness — and war. Convinced they are alone, Humans retreat back to Earth to preserve what is left of Humanity, and to end war permanently. In the process of decommissioning their instruments of war, mankind concludes that the most deadly instruments are they themselves. War is a product of human nature. They fully pull themselves above the decision-making loop, relegating the majority of action to their AI constructs until the signal arrives that reminds them of their past. With only an academic knowledge of warfare and access to the greatest technology in creation, the Human expedition on Nine must resurrect their old instruments of war and return themselves to the seat of command. Their own survival, and potentially the survival of all life in the Galaxy, depends on it.

The Human faction as a whole displays the following tropes:

"The most powerful instrument of war is observation."

Always the puzzle solver, Lucy Tak nurtured a curiosity uncharacteristic of other Humans. Taught by her father to be fearless in the face of the unknown, Lucy seizes the opportunity to venture into the depths of space to trace the source of a mysterious signal containing an echo from Humanity's past.

When she discovers more than predicted, Lucy is forced to transform her scientific expedition into a military operation. Armed with only an academic knowledge of warfare, Lucy must resurrect the retired Human arsenal of war; for their own survival, and potentially the survival of all life in the Galaxy.

"We fight so that others may live."

Singleton is one of the earliest graduates of the Valiant Program, a program dedicated to creating high-functioning machines capable of making quick judgment in uncertain situations. Blending disciplines from robotics and early childhood development, the Valiants were said to have been programmed with only one instruction: "That Others May Live". Life would teach them the rest.

Instantiated in the late 21st Century, Singleton served as a soldier for two centuries before being decommissioned for a third. Singleton continues to compile his one line of code.

"The best response is a calculated one."

The Multi-user Mainframe is the totality of Humanity's combined artificial intelligence suite. MUM handles advanced calculations while taking in to account the vast records and knowledge base of the entire human experience. MUM is, most often, used as an advisor for millions of people spread across the galaxy.

MUM has no direct control over any specific hardware, though it can interface with just about every piece of robotics created. It is considered infallible by a large portion of humans, and so many major decisions are left up to the computer. However, it lacks the soft touch and humanity of the Valiants, causing some to mistrust the machine.

"Fortunate? What does fortune have to do with anything?"

While the son of a Lucasian Council member, John Redgrave struggled to find the promised peace in the utopian life on Earth. Failed by his society after a teleportation accident that took the life of his mother and left him permanently scarred, Redgrave embraced recklessness as a virtue. While this put him at odds with general Human society, he excelled in the high-risk culture of the Alpha Program, outperforming all other participants.

The Agents of Chaos
Originally engineered in the late 21st Century as an exploration tool, the Goo was the key to unlocking Humanity's passage outside of the Solar System. Prior to humanity's invention of Faster Than Light travel, a gate was found on the edge of the Solar System, leading to the other side of the galaxy. The problem was that said gate was but a few millimeter wide, meaning that no ship could cross it. Humanity's solution was a Von Neumann probe

, a probe made of nano machines, self-sufficient, self-replicating and able to access the inaccessible, it revealed the Galaxy's secrets and charted traversable paths stretching across the Milky Way, scouting ahead of the humans while they researched the wormhole to develop keyhole technology. As the undiscovered became discovered, and the unknown disappeared, the Goo had fulfilled its purpose and was decommissioned... or so it was thought. More than a century has since passed, and the Goo has returned from the last remaining darkness of the Galaxy. It has altered, evolved, and is set on a path of destruction leading back to its creator.

The Grey Goo faction as a whole provides examples of:

The Shroud
A malevolent race of alien locusts responsible for wiping out most of the Beta race and causing the Grey Goo to reassess the Three Laws-Compliant code that all humanity's robotics have to mean "I've got to stop this thing or everyone dies." Known to the Beta as "the Silent Ones" and to mankind as "the Shroud". They serve as a bigger bad in the main game as their existence is what propels the three factions to fight each other, and as the Big Bad faction of the expansion DLC Descent of the Shroud.

The Shroud provide example of: