The descriptions for most of the characters come from their play bios. 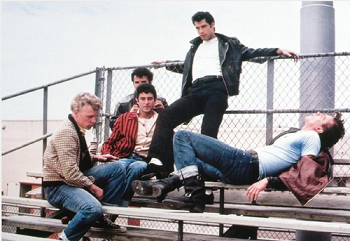 A super-cool, DA-haired, hard-looking group of high school wheeler-dealers... or so they think.

Danny is the leader of the greaser boys. He is well-built, good-looking, strong and confident, with an air of cool easy-going charm.

Kenickie is second in command of the greaser boys. He is tough-looking, tattooed, surly and tries (rather unsuccessfully) to avoid any show of softness. He has an offbeat sense of humour.

Doody is the youngest of the guys. He is small, boyish and open, with a disarming smile and a hero-worshipping attitude towards the other guys. Doody also plays the guitar.

Sonny is an Italian-looking guy, with shiny black hair and dark, oily skin. He is a braggart and wheeler-dealer who thinks he's a real lady-killer.

Roger is the anything-for-a-laugh stocky type of boy. A clown who enjoys winding people up, he is full of mischief and is always dreaming up half-baked schemes and ideas.

A young, kind of awkward and nerdier member of the Burger Palace Boys. 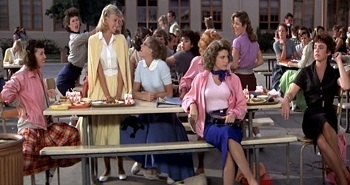 This is the club-jacketed, gum-chewing, hip-swinging girls' gang who hang around with the greaser boys. 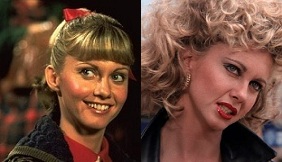 Sandy is Danny's love interest. She is sweet, wholesome, naïve and cute, like Sandra Dee of the Gidget movies.

She is the leader of the Pink Ladies. Rizzo, a thin Italian with unconventional good looks, is tough, sarcastic and outspoken but vulnerable.

Frenchy is a dreamer - good-natured but dumb. She is heavily made up, fussy about her appearance, particularly her hair. She can't wait to finish high school so she can be a beautician.

Marty is the 'beauty' of the Pink Ladies. She is pretty and looks older than the other girls, but betrays her real age when she opens her mouth. Marty tries to act sophisticated.

Jan is a chubby, compulsive eater. She is loud and pushy with the girls, but shy with the boys.

Principal McGee's faithful assistant. She can be a bit lightheaded at times.

A teacher who has a mutual friendship with the greasers.

Tom is a jock who is fit and well-built.

Played by: Sid Caesar (film, 1978), Wendell Pierce (Grease Live, 2016)
"When we get out there, we're gonna yank 'em and tear 'em and rip 'em! We're gonna take 'em and roll 'em around and rip 'em up to pieces! And then we're gonna slaughter 'em. And after the slaughter is over, we're gonna come back here and ring that victory bell... like we always wanted to."

A coach who is passionate about his field of study.

Vi is a waitress at the Frosty Palace who keeps in touch with the greasers.

Leo is the leader of the greasers' rival gang.

Played by: Steve Munro (Kingston Mines, 1971), Tom Harris (Broadway, 1972), Eddie Deezen (film, 1978), Noah Robbins (Grease Live, 2016)
"Miss Lynch, fellow graduates, honored guests, and others. Looking over these familiar faces really takes me back to those wonderful bygone days. Days of working and playing together, days of cheering together for our athletic teams—Yay, Ringtails!—and days of worrying together when examination time rolled around."

Eugene is the class valedictorian. He is physically awkward, with weak eyes and a high-pitched voice. He's a typical 'apple-polisher' - both smug and pompous, but gullible.

Patty is a typical cheerleader at a middle-class American public high school. She is an attractive, athletic, sure-of-herself type of girl who can be given to bursts of disconcerting enthusiasm. Patty can be catty, but in an All-American Girl sort of way; however, she can also twirl a baton.

Vince is a typical 'teen audience' disc jockey, who is slick, egotistical and fast-talking. He is also a veteran 'Greaser'.

Cha-Cha is a blind date. She is slovenly and loud-mouthed but homely. She takes pride in being the best dancer at 'St Bernadette's'.

Teen Angel is a good-looking, falsetto-voiced, Fabian lookalike. He is a singer who would have caused girls to scream and riot back in 1958. 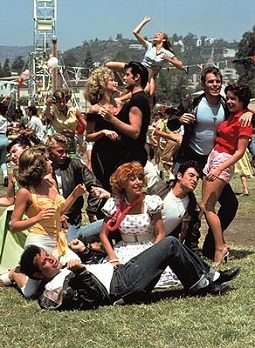