This is the character sheet concerning the friends and associates of Carl "CJ" Johnson from Grand Theft Auto: San Andreas. For a full index of characters from the game, click here. For tropes relating to characters debuting in other titles, see the main GTA Characters Index. 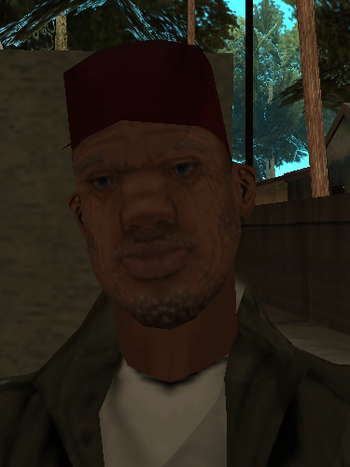 ...And remember this. Emmet is the place for guns! I've always got high quality merchandise. And I've been proudly serving the community for over 30 years!
Voiced by: Eugene Jeter Jr.

A Seville Boulevard Families member and owner of a small gun store in Willowfield.

CJ and Big Smoke meet up with him to get some guns and basic practice after an LSPD raid left the Grove Street Families unarmed. 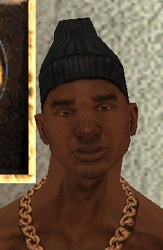 "Damn, my shit was whack!"
Voiced by: Jonathan "Jas" Anderson

An amateur rapper and an associate of the Families. One of the youngest members of the GSF, Loc was always seen as something of a little brother to the homies, something that he resents deeply. As such, he constantly tries to impress them, doing anything to earn respect - up to and including intentionally racking up traffic violations to gain a prison sentence.

After being released from prison early in the game, he gets a parole job as "hygiene technician" (read: janitor) at the Burger Shot branch in Marina, western Los Santos. Still desperate for street cred, he begs CJ to help him establish his rap career... by ruining the life of the fading rap star Madd Dogg. 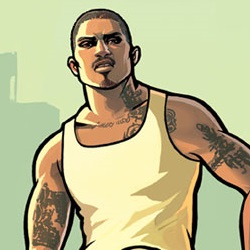 "Look holmes, I love your sister. I honor her; she's my girl for life."
Voiced by: Clifton Collins Jr.

Leader of the Varrios Los Aztecas, a Mexican gang that controls a large portion of western Los Santos and has a small presence in San Fierro, who loves cars almost as much as he loves Kendl. These two passions are what cause his first meeting with CJ, who follows him to a lowrider competition to watch over his sister.

After a brief confrontation, the two strike up a strong, close friendship, which eventually grows into a full-on partnership between the Aztecas and the Families. 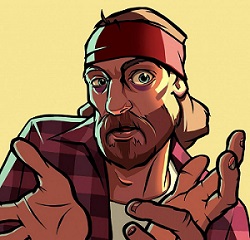 "Shoot? I'm a Hippie! The only thing I've ever shot is acid."
Voiced by: Peter Fonda

An aging hippie running a marijuana farm in Leafy Hollow, on the outskirts of San Fierro. He meets Carl through Tenpenny, a frequent customer of his, who demands that Carl work off the debt that he owes from all the weed he's been buying on credit.

Sympathetic to Carl's plight, seeing him as a fellow warrior against the system and all, they form an Odd Friendship that lasts the rest of the game. 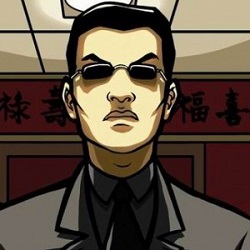 The blind, yet unnaturally lucky leader of the Mountain Cloud Boys, a Triad sect based in Chinatown, San Fierro. Carl meets him while attending an illegal race in Red County with Cesar, where the two quickly strike up an Odd Friendship. Once he arrives in San Fierro, Carl contacts him for work, which he happily provides, along with financial support from his gang.

The two eventually form a profitable business partnership in the form of the Four Dragons Casino in Las Venturas, which serves as Carl and his friends' first step towards a life of luxury. 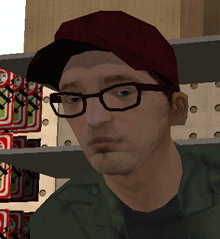 An acquaintance of the Truth and owner of an RC toy shop in San Fierro, which is experiencing some money troubles. After purchasing the shop, Carl helps him out with a number of problems, namely those stemming from his murderous rival, Berkley, and the two form yet another Odd Friendship. Afterwards, he serves as CJ's go-to hacker for high-profile jobs. 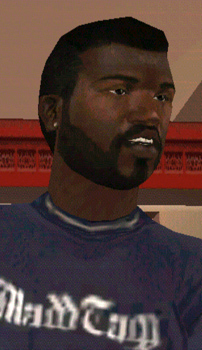 One of the most successful rappers of the West Coast rap scene, at least for a while, Madd Dogg's career was already waning when OG Loc forced CJ to ruin his career. Humiliated, penniless, and a national laughingstock, he fled Los Santos and turned to drinking, eventually trying to throw himself off of the roof a hotel in Las Venturas. By chance, CJ happened to be there, and saved his life out of remorse.

Feeling guilty about his role in Madd Dogg's downfall (something which Dogg himself was unaware of), CJ decided to help him get back on his feet, becoming his new manager with help from Ken Rosenburg and Kent Paul. Returned to greatness once more, Madd Dogg's success is what finally marks the Johnson family's rise to fame and fortune.

A Grove Street associate and CJ's first girlfriend. One of the two love interests encountered in the storyline.

A croupier at the Caligula's Palace casino in Las Venturas and, just like Denise, she is another CJ's girlfriend tied with the storyline. In Millie's case, her entry card is required as part of an heist planned by CJ and Woozie, and only possible after dating her for a significant time. Prefers PCs with high muscle.

Helena is a lawyer and gun enthusiast living in a farm out in the country. CJ can meet her on top of the Ammo-Nation Blueberry, Red County. Prefers skinny PCs. As in, low muscle and fat.

Katie is a nurse in the ER unit of the San Fierro hospital who lives at the northwest corner of the city, just southeast of the Gant Bridge and the nearest home to it.note though it's implied she doesn't like the area She will likely either be at the karate dojo in Garcia or Avispa Country Club at the south end of the city, practicing t'ai chi behind some bushes. While dating her, you can get free healthcare and keep your weapons if sent to the hospital. Prefers PCs with high muscle.

Michelle is a mechanic who works at her auto-repair shop, "Michelle's Auto-Repair", in Downtown San Fierro, which is also her home. She is first encountered inside the Driving School talking to a pedestrian. Michelle is able to fix and respray Carl's vehicle for free in her. Prefers PCs with high fat.

A divorced deputy sheriff in Tierra Robada and a single mother as well. Available to date after "Yay-Ka-Boom-Boom".