This is the character sheet concerning the main antagonists of Grand Theft Auto: San Andreas. For a full index of characters from the game including Big Smoke and Ryder, click here. For tropes relating to characters debuting in other titles, see the main GTA Characters Index. 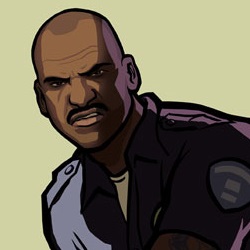 "We own you. You're ours. We can shit on you from such a height, you'd think God himself has crapped on you."
Voiced by: Samuel L. Jackson

The main antagonist of San Andreas, Tenpenny is the corrupt leader of the LSPD's C.R.A.S.H. (Community Resources Against Street Hoodlums) Unit. He is bent on destroying all of the gangs in the state by playing them out against each other, and is willing to murder innocents, assassinate fellow officers, and distribute guns and drugs to do this.

Shortly after Carl arrives in Los Santos, he has the former gangster arrested, framing him for the murder of Officer Ralph Pendlebury, an Internal Affairs officer that Tenpenny himself had just had silenced. Using this and his power as a cop as leverage, he antagonizes Carl throughout the game, following him all across the state and forcing him to do his dirty work. 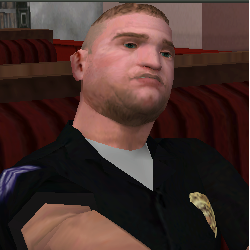 "I ain't such a fucking soft touch!"
Voiced by: Chris Penn

Tenpenny's right-hand man in C.R.A.S.H., as well as a racist prick. Pulaski is dumb, loyal, and arrogant, forming a sort of "Bad Cop / Even Worse Cop" routine with Tenpenny throughout the game, starring him as the latter. He also handles anything that Tenpenny deems too important to hand off to Hernandez or Carl, but not important enough to bother with himself. 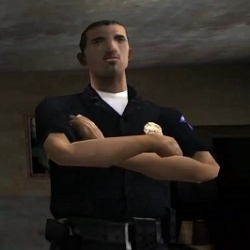 "There is only one kind of crime in Los Santos: gang crime. That's why I joined C.R.A.S.H."."
Voiced by: Armando Riesco

A new member of C.R.A.S.H. and a Mexican immigrant, who Tenpenny and Pulaski love pushing around like a slave. Brought in as a replacement for Ralph Pendlebury, a snitch that Tenpenny forced Hernandez to "deal with" as an initiation rite, he mostly serves as their henchman in the background handling every menial task that Tenpenny and Pulaski don't want to deal with themselves. Turns out, he's actually a snitch that's been leaking information to Internal Affairs, the Feds, and possibly the Aztecas. 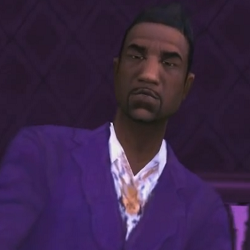 "See I only got two eyes and in this world you got to have mo' than that. You gotta be like a fly on shit, you know? A hundred eyes everywhere!"
Voiced by: Charlie Murphy

A higher-up in the Loco Syndicate, the crack cocaine cartel supplying C.R.A.S.H. and the Ballas, and owner of the Pleasure Domes, a strip club underneath the Gant Bridge at Battery Point, on the northernmost end of San Fierro, which also doubles both as the Syndicate's headquarters and center of Jizzy's prostitution ring. Carl targets him as an "in" for the Syndicate, hoping to infiltrate and destroy it so he can halt the spread of crack in San Andreas. 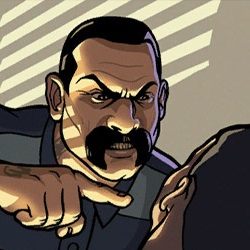 "You think you can fucking bullshit me, and fuck me over? I know your fucking game, ese."
Voiced by: Arturo "Kid Frost" Molina, Jr.

The Loco Syndicate's main enforcer and leader of the San Fierro Rifa, a Hispanic gang abundant in the southern half of San Fierro. He serves as the right-hand man to Mike Toreno, helping him deal with any threats to their business. Brutish and distrustful, he's forced to work with CJ once the latter has worked his way into the Syndicate, and serves as a major roadblock to Carl's efforts. 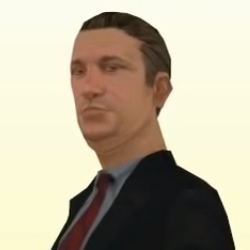 "It's not all white knights and heroes. We have to make decisions, kid. You know, I try to set bad people on other bad people and sometimes I let good guys die."
Voiced by: James Woods

The mysterious leader of the Loco Syndicate, a drug-running enterprise in San Fierro that supplies C.R.A.S.H. and the Ballas with crack. Few people have seen his face, fewer know his name, and fewer still know anything more than that. Carl targets him in an attempt to halt the flow of crack into Los Santos, destroying his business and shooting his helicopter out of the sky.

However, that's not the end of it. Turns out, he's working undercover for a Top-Secret agency within the US Government, and is one of their top spies. After Carl destroys the Syndicate, which he'd been using to fund various overseas operations, Toreno forces him to do his dirty work in exchange for Sweet's freedom.