This is the character sheet concerning the protagonists of Grand Theft Auto IV and its downloadable expansions. For a full index of characters from the game, click here. 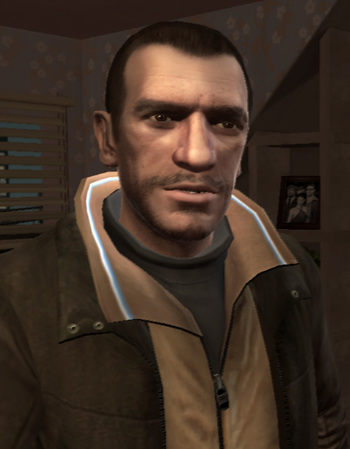 "During the war, I did some bad things, and bad things happened to us"

Raised in Serbia during the Bosnian and Yugoslav Wars, Niko Bellic came from a background of poverty and non-stop violence, and his family was tormented by the horrors of war. As a teenager, he fought in the Yugoslav People's army as a helicopter pilot and infantryman, along with several other youths from his village. Unfortunately, they were betrayed by one of their number, led into an ambush which only Niko and two others survived.

Once the war ended, Niko turned to a life of crime, running drugs and human cargo across the Adriatic Sea for Russian mafioso Ray Bulgarin, though the partnership ended on bad terms. Motivated by both a desire for revenge and for a better life, Niko decided to come to Liberty City on a cargo ship to live with his cousin, Roman, whose stories of mansions and sports cars gave hope to Niko.

Unfortunately, the reality of the situation turned out to be very different - the "mansion" was a dockside slum, the "sports cars" taxi cabs. On top of that, Roman was heavily indebted to Russian mobster Vlad Glebov, and Niko soon found himself returning to a life of crime to work off Roman's debts... 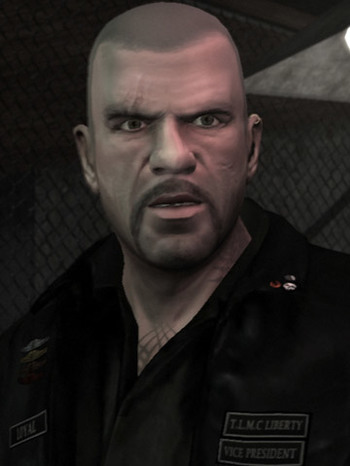 "No wonder you keep getting caught then, Billy. You can't stay away from it."

"A brother might stab you in the back, a woman certainly will, but a bike will never let you down."

Born in the industrial neighborhood of Acter in Alderney to a jewish family, Johnny Klebitz always lived in the shadow of his older brother, Michael, an upstanding citizen currently serving a tour of duty in Iraq. He took solace in his friendship with Billy Grey, a fellow troublemaker and motorcycle enthusiast, and the two eventually joined the Lost MC's Alderney chapter.

The duo took to the outlaw lifestyle like fish to water, earning Johnny a six-year prison sentence in 1994. Despite this, he continued to dedicate himself to the gang, as he'd come to view his "brothers" as family. Unfortunately, things started to go wrong fast. His long-time girlfriend, Ashley Butler, found herself addicted to meth and in debt to her dealers, often turning to prostitution to fund her habit, and Billy went down on a drug offense shortly thereafter.

Naturally, it was left up to Johnny, the club's most dedicated member, to keep things running smoothly in Billy's absence, and he became acting president of the club. During this period, he ended the long-standing war between the Lost and their rivals, the Angels of Death, and set up a number of criminal deals to keep the gang financially afloat. This all comes crashing down, however, when Billy returns from rehab, crazier than ever, and kicks off the war with the AoD once again...

For tropes relating to his appearance in Grand Theft Auto V, see his entry in this character sheet.
Luis Fernando Lopez 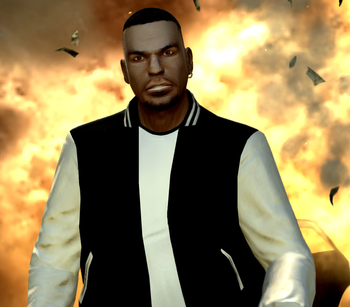 Born in the latino neighborhood of Northwood in Algonquin, Luis Lopez was the middle child of his family, and as such, the least respected. His father, a US Marine, ran out on the family when he was young, forcing his mother to raise her three children alone. This stressful home life, combined with the influence of his best friends, Armando Torres and Henrique Bardas, made Luis something of a troublemaker, culminating in an incident where he shot a teacher who had felt up his sister.

Sentenced to 2 years in juvenile hall, followed by a series of prison sentences when he came of age, Luis became hardened, working out more and getting involved in illegal cage fighting rings. He became heavily involved with the Northwood Dominican Drug Dealers alongside Armando and Henrique, and found himself constantly harassed by the police. All this changed, however, when he accepted a bodyguard job for famed nightclub owner and socialite Anthony "Gay Tony" Prince, who helped turn his life around.

Cutting ties with his gang and involving himself more and more in the glamorous nightlife of Liberty City, Luis eventually became Tony's right hand man, managing the clubs and organizing the business side of things while Tony handled publicity. However, after being caught up in a robbery perpetrated by Niko Bellic and Patrick McReary, Luis's life is turned upside down, as Tony's mafia creditors decide all at once to collect on their debts...