Here are the tropes for the playable characters of Grand Chase. Go here for tropes of the Grand Chase that are specific to Dimensional Chaser. 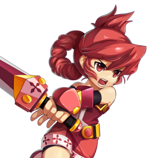 A Kanavan Knight trained by her father, Elesis joins the Grand Chase after her father disappears while attempting to locate Kaze'aze. At first she is rather rash and hot-blooded, but winds up taking up the role of leader following the Knight Master's departure.

Her four jobs are the following: Knight, Spearman, Swordmaster and Savior. 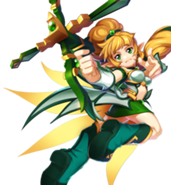 Hailing from Eryuell Island, Lire is a young member of the Elven Corps who has joined the Grand Chase on the behalf of her elven brethren. Despite being the same age as her teammates Elesis and Arme, Lire is a great deal more rational and mature than the two, and often has to mediate whenever they argue.

Her four jobs are the following: Archer, Crossbowman, Arch Ranger and Nova. 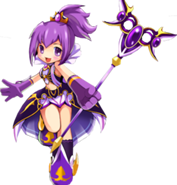 Child prodigy member of the Violet Magic Guild, the cheerful Arme is always on the lookout for new magic she can learn, despite having already mastered the White and Black varieties. Upon learning of the Queen of Darkness's magical might, Arme joins the Grand Chase in hopes of encountering the dark queen (and possibly picking up a few new spells along the way).

Her four jobs are the following: Magician, Combat Alchemist, Warlock and Battle Mage. 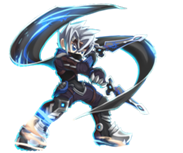 Member (and later leader) of the Silver Cross guild of assassins, Lass is the former human host of the Queen of Darkness, Kaze'Aaze. Upon her defeat, the newly-freed Lass joins the Chase to atone for his crimes. 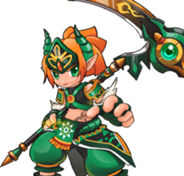 His four jobs are the following: Druid, Sentinel, Viken and Xenocider / Vanquisher / Avenger. 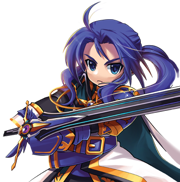 Scion of Erudon, a family of Magic Knights in Kanavan. Was a Royal Guard Master protecting the Kanavan Royal Family before joining the Chase after defeating Gaikoz. 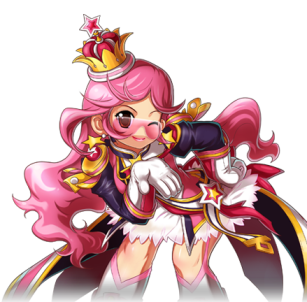 Oracle and Dancer from the Xenia Continent. Joins the Chase in the Temple of Origins.

Her four jobs are the following: Dancer, Muse, Siren and Sistina / Starlet. 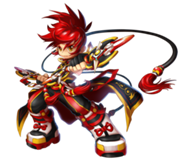 Lone surviving member of the Silver Knights. Joined the Chase in their journey through the Silver Land. 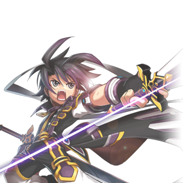 Legendary Master Gladiator of Kanavan a long time ago and was presumed dead after going to a journey. He was granted Immortality by the Highlander Gods. 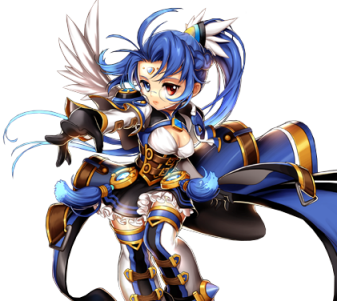 Last remaining survivor from an ancient kingdom once known as Kounat, searching for her missing memories. 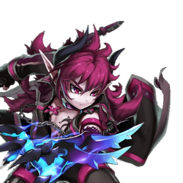 Leader of the Burning Canyon clan of Asmodians, Dio is brought to the world of Grand Chase by the dimensional distortions that plague it. He mounts a one-man quest to find and seal these distortions, and grudgingly joins the Chase when he realizes his task will be easier as part of a group. 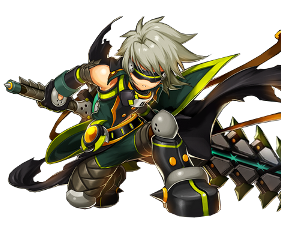 Much of his past is shrouded in mystery. What we do know is that he may be a relic of Kounat, given the Grandark and tasked to wander the world. He runs into the Chase in Xenia and joins forces with them presumably after that.

His four jobs so far are the following: Wanderer, Seeker, Banisher/Vanisher, Advancer 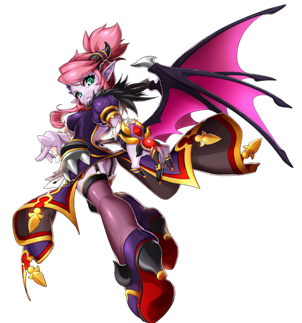 Like Dio, she hails from the same world as he does. His Burning Canyon clan is a rival to her Crimson River clan. Upon learning that Dio joined the Chase, she follows in pursuit and soon joins the Chase to make sure her rival doesn't try anything funny. 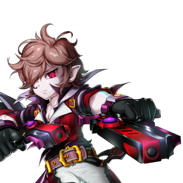 The 14th member of the Chase. He is Lass's half-brother and a bounty hunter who hunts down lost souls who escape from the Underworld. 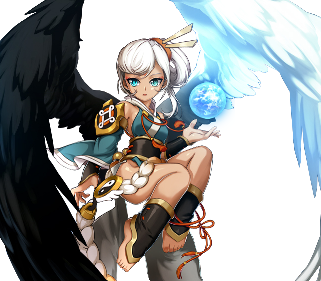 The 15th member of the Chase. Unlike the previous members, you have to follow a randomized arrow sequence in order to amplify her special skills. From her 2nd job on, you are able to choose in her skill tree if you want to follow the "light" path (following what would be her normal progression as the reincarnation of the goddess Agnesia) or "dark" path due to her being shaken by the destruction of her village, allowing the evil sealed inside her to take over.

Her four jobs are the following: Phoenix, Awakened, Chaotic, Chosen 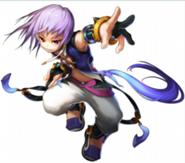 The 16th member of the Chase. Asin is the first MP/AP hybrid character, and gets stat bonuses every 20 levels. He is the first character that has been stated to not need any further job changes by Word of God. However, this is no longer standing since he got a new job as Mugen, although this is known as a 'Special Job'.

His job is the following: Disciple, Mugen 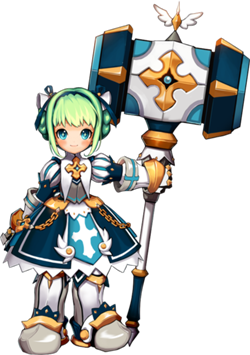 17th member of the Chase, she is the second character that gets all her skills and stat bonuses in one skill tree, and thus does not need any further job changes. However, just like Asin, she got her new job, as Saint. Her play style revolves around buffing allies with her auras (Sound familiar?).

Her jobs are the following: Holy Knight / Paladin, Saint

18th member of the Chase and heiress of the Frost Family, she joins the chase while searching for her dissapeared brother, Adel. Her weapons of choice are a rapier and a flintlock, with the playstyle revolving about quick combos.

Her jobs are the following: Captain, Major.

19th character of the game, hailing from Elyos. Unlike the others; Veigas is a Playable Villian, but still follows the same storyline when being played as other characters.

His job is the following: Magi 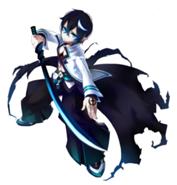 The 20th character of the game. Uno was unintentionally created by the highlanders slain by Ashtaroth. Upon Ashtaroth's defeat by the chase, the seal placed over the highlander's training grounds was lifted and Uno rose from the pool of blood he was born in and began to roam freely. After sometime roaming, Uno collapsed and was found by a young village girl named Reina. He was comforted and taken care of by the entire village during his stay. But the blood that he was born from gave him an uncontrollable thirst for more. He slayed the entire village, leaving it with nothing but flames. Upon leaving the town, he felt a familar presence in the distance. Taking up wandering once more, Uno headed out to find someone that could possibly help him.

His job is the following: Bloodless