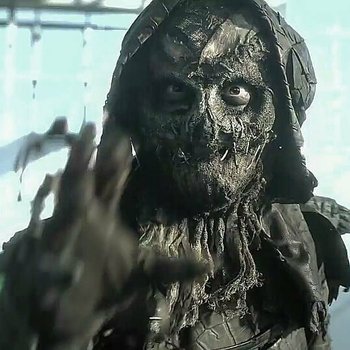 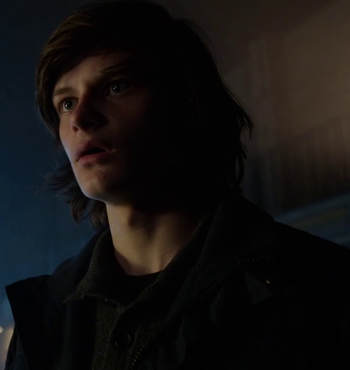 Forced to go along with his father's fear experiments as a teen, he later submits to and adopts the identity of his personal bogeyman: a Nightmare Fuel scarecrow-demon conjured up by his own fear toxin-addled imagination - the Scarecrow. 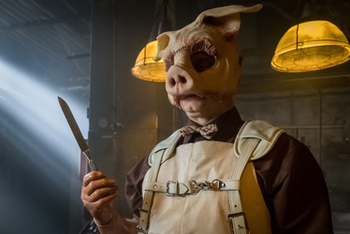 "You'll never forget me. I promise you that."
Click here to see him unmasked. 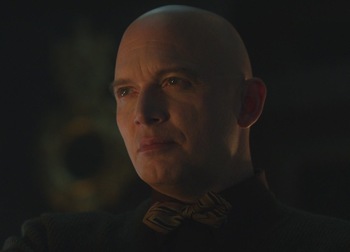 Played by: Michael Cerveris
"What you said about the rot in Gotham, high to low - so concisely phrased - well, it gave me an idea. The next step in my plot. It's a saga. It's an epic. It's a spectacle. And you're my muse, Jimmy Gordon."

A deranged serial killer who sports a pig mask. His primary targets are the corrupt cops of Gotham, although he seems to have taken a liking to Jim Gordon... 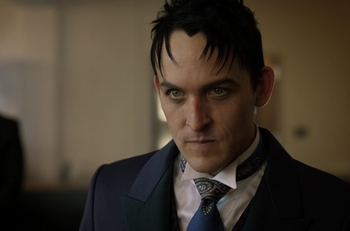 "Foolish arrogance led me astray. But I learned my lessons. I'll be back, stronger and smarter than ever."
Played By: Robin Lord Taylor
"A year ago, I held Fish Mooney's umbrella. Now she's dead by my hand, along with Maroni. Falcone is in hiding, and all of their businesses are mine. They all underestimated me. I suggest you not make the same mistake."

A former flunky in Fish Mooney's employ, he betrayed her to the police and his death was ordered, to be carried out by Detective James Gordon. Gordon couldn't go through with it though, and Oswald joined the opposite side of the mob war as a lieutenant of the Maroni Family. However, his only true allegiance is to himself, manipulating and betraying anyone he can to further his position in Gotham's underworld. Often called "Penguin" due to his mannerisms and appearance, he initially hates the nickname but later decides to embrace it.

Ra's al Ghul
The mysterious leader of the League of Assassins, Ra's is an immortal seeking an end to his long life - and in season 3 takes a distinct interest in Bruce. For tropes regarding him, see Other Criminal Groups.
Selina Kyle/Catwoman 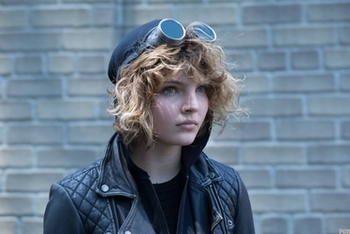 "Five minutes on the street, you'll be mincemeat." 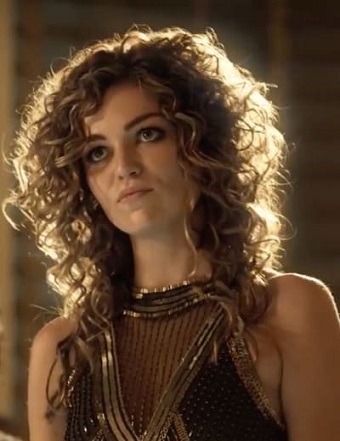 Selina as an adult
Played By: Camren Bicondova, Lili Simmons (adult)
"Rule number one: look after number one."

A teenage girl with a fondness for theft and cats. The future Catwoman. She witnessed the murder of the Waynes, and has been keeping an eye on Bruce, a relationship that gradually sees both become more and more attracted to each other despite their differing moral codes. 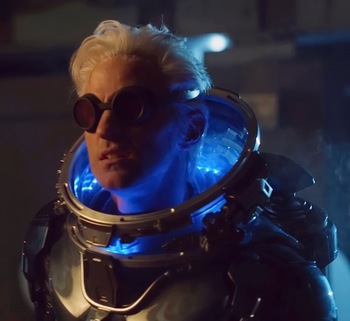 "They think walls and guns can stop me? They have no idea... they'll learn."
Played By: Nathan Darrow

A young cryogenics engineer-turned-criminal who first appears at the end of the Season 2 mid—season finale. Armed with a powerful gun that can freeze people solid, he goes through tremendous lengths to save and protect his ill wife, Nora - but all for naught. The combination of the emotional trauma of his wife's death, a botched suicide attempt with his own freezing chemicals and Hugo Strange providing his famous suit have rendered him Mr. Freeze by series' end. 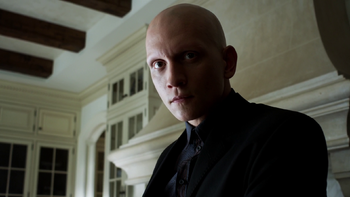 An enforcer and killer working for Don Falcone, and later the Penguin.