Here's a list of characters from the video game God Hand. 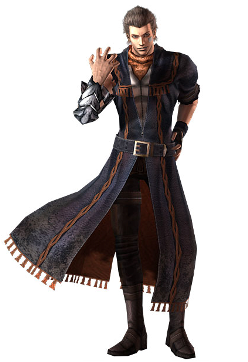 Voiced by: Beng Spies
"Newsflash, big guy: you can wax on, wax off all you like. I'm still kicking your ass."

The player character of God Hand, Gene is a 23-year-old wisecracking drifter who really likes beating people up, and firmly believes that he has a "macho" exterior. However, he earnestly has a strong sense of justice and upon witnessing a young woman being attacked by a gang of demons, immediately runs in to save her. Things don't go quite as planned, and Gene ends up getting his own right arm hacked off. The woman, named Olivia, shows her gratitude by replacing it with one of the legendary God Hands. With this new power, Gene is now fully capable of going toe-to-toe with even the most powerful of demons... but he is also obligated to rescue those under the yoke of Demonkind. And if he doesn't comply, Olivia will simply take the God Hand back, preferably with a hatchet. 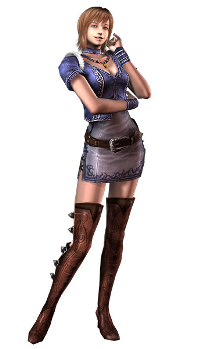 This young lady is actually one of the last surviving members of the clan that has guarded the Godhands for centuries. She barely escaped the massacre of said clan, entrusted with one of the God Hands by her father. She is saved by Gene when she's attacked by Bruce and Felix, and gives Gene the God Hand as a gift of "thanks" — because she now has someone to order around and stop the demons from overthrowing humanity. But if Gene has the right God Hand, where is the left one?

He is the leader of the Four Devas. The oldest, most loyal servant of Angra, Belze is fond of holding meetings and wearing cheap suits. He wants nothing more than to resurrect his master and thinks of humans as mere filth. He doesn't like it when Shannon puts her feet on his precious table. He tends to sit on the sidelines while his underlings do all the dirty work for him, but what will he do when he himself is forced to battle Gene?

The newest member Belze's Four Devas and the possessor of the left God Hand, Azel chose to side with the demons to further his own goals, calling himself the Devil Hand. Being human, he often clashes with Belze.

Voiced by: Susan Chesler
"Mortal men... so many uses. They can make such wonderful toys!"

Shannon is the only female member of the Four Devas, who knows exactly what she wants. She doesn't care about the revival of Angra — only seeking pleasures, partying, and her own fancies at any cost. She owns several poison chihuahuas and very much would like to make Gene into her "pet". Elvis has a big crush on her, while Gene just thinks she's an insane nympho. 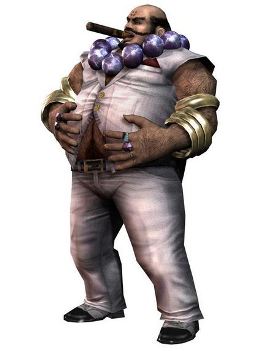 This fat, heavy cigar-smoking, potty-mouthed member of the Four Devas has a huge crush on Shannon and likes to eat humans. Seeing as how he really likes Shannon, he tries to prove his worth to her by fighting Gene. 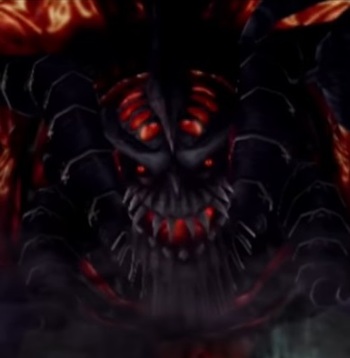 A Fallen Angel, cast down into hell for his pride. The lord of all demons, Angra, filled with anger and hatred, raised an army of spirits and demons in a bid to take over the world of humans. Angra would have succeeded; however, a mysterious man with no name appeared and his arms were blessed with the holy power of God. He fought and defeated the demon army, before finally beating the crap out of and sealing Angra away, sending him back down to whence he came. The people he had saved, grateful for this brave savior, gave him the name of "God Hand." The man's arms, the God Hands, were then given to a clan that would protect them from evil, should they be needed again. In the present day, the Four Devas are working to revive Angra, and possibly capture the God Hands to ensure that nothing interferes. 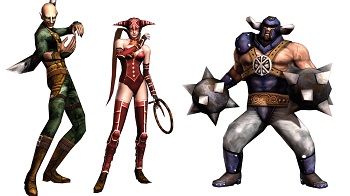 A trio of demons serving the Four Devas, they are comprised of Bruce (the horned brute), Felix (thin guy in green), and Conchita (she whips it good). Felix is the one who severed Gene's arm. Once Gene gains the God Hand, he believes a little payback is in order. 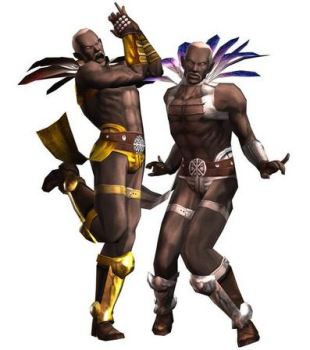 Gene runs into these flamboyant twins early in Stage One. They apparently work for Elvis and will make passes at Gene during their battle. 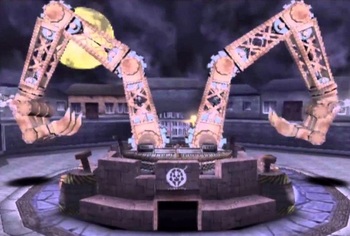 A two-armed crane with a pair of pincer-like claws.
The Mad Midget Five 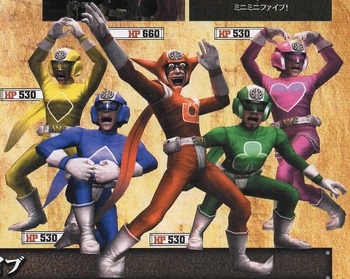 A group of Sentai-themed little people all named after card suits (Joker/Diamond/Club/Spade/Heart). 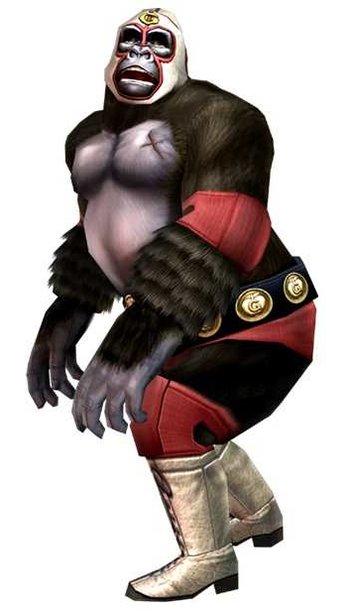 A gorilla in a luchador suit.
Psychic Midget 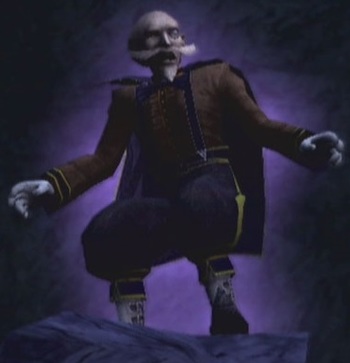 A highly paranoid telekinetic midget who picked the wrong game to appear in. 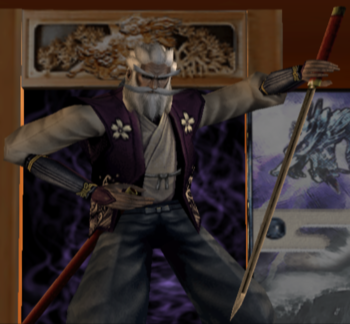 Master swordsman fond of sending his student after Gene and appearing through teleporting doors. Can clone himself. 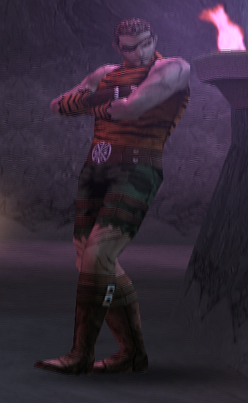 An unusually powerful mook Gene can fight twice over the course of the game. Or not.
Fat Ninja 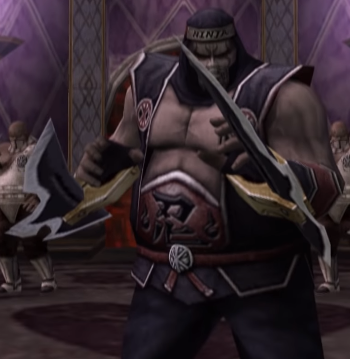 A larger, black-clad version of the fat ninja enemies. Appears as one of he four major trials Gene must face before he can reach Angra's altar.
Afro Fist 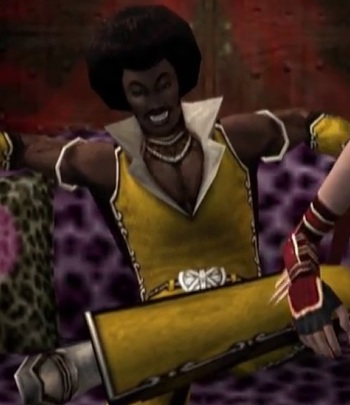 A disco dancer who challenges Gene as one of the four trials he must overcome before he can reach Angra's altar. Can be seen enjoying the company of Conchita and a female wrestler enemy.
Dr. Ion 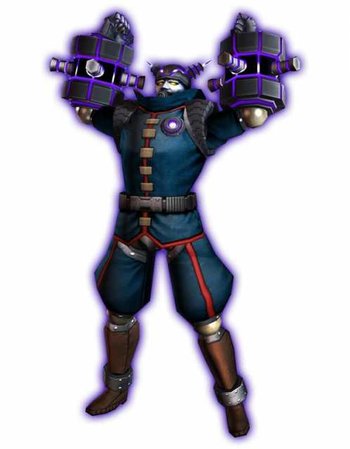 A clunky old robot with a pet bird that is considered a prospective member of the Devas.
Ravel & Debussy 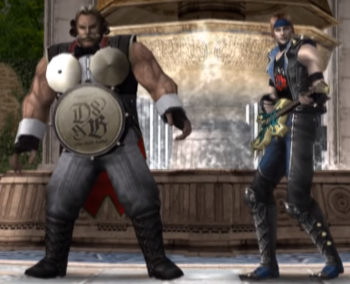 "The rock duo from hell". Supposedly they sold their souls to the demons in order to gain great musical talent. Seems to not have worked so well in that sense, as they still suck as musicians. What these two got from the deal is being able to unleash powerful energy blasts from their instruments as they play. Ravel is the skinny guy who wields an electricity-shooting guitar. Debussy is the big guy who carries a drum set attached to his body, beatboxes, and sends shockwaves at Gene. They have another guitarist, but he's really just a skin swap of Ravel.