A list of characters introduced in God Eater 3. Warning, several unmarked spoilers below.

A ragtag group initially comprised of AGEs from Port Pennywort. After being abandoned by their owners during an Ash Storm the group is picked up by Hilda and Caravan Chrysanthemum. Thanks to the abilities of the protagonist and Hugo's negotiation skills, their contracts are later purchased by Hilda and the group become official members of Port Chrysanthemum.

Tropes that apply to the group as a whole: 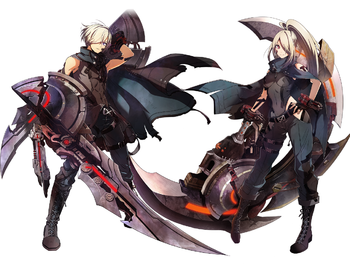 An Adaptive God Eater from Port Pennywort. Conscripted as a young child, they grew up alongside Hugo and basically serve as his second-in-command. Thanks to their high resonance aptitude, they later become the Navigator of the Chrysanthemum.

An AGE belonging to the Pennywort Port located in the Ashlands. He became an AGE together with the Protagonist when they were young. He is active, quick on his feet, and a respected leader among his companions, acting as an older brother figure to them as he cares for them.

Another AGE contracted to Port Pennywort (and joining some time after Hugo and 01408 were drafted), Zeke is the third member of the Hounds and its premier attacker. He was raised in a particularly rough environment compared to his friends and tends to act like a bit of a delinquent, but is caring of others and has a strong sense of fellowship towards those that he trusts.

A qualified traditional God Eater who belongs to Gleipnir. She has a diligent, honors student temperament, and specializes in logistical support and first aid in battle. She first meets the Hounds not long after they come on board the Chrysanthemum crawler, guarding the door to the crawler's cargo container which is later revealed to contain Phym.

A veteran AGE originally from Port Baran. As a test subject for the “Accelerator Trigger” combat support system being developed in Baran for God Eaters, she has high mobility and an outstanding ability to overcome her enemies. Since becoming AGE-compatible when she was an orphan, she has been subjected to and carried out numerous merciless missions. After being abandoned by her Port, she joins Caravan Chrysanthemum and becomes a member of the Hounds.

Phym is a mysterious girl whom the protagonist and company meet after discovering her within the cargo hold of the Ash Crawler Chrysanthemum during an Ash Aragami attack. Her life is saved by the protagonist but is heavily wounded as a result. Phym in turn saves their life and quickly becomes attached to them, referring to the protagonist as either daddy or mommy depending on their gender.

Though she has the appearance of a young girl, in truth she is actually a Humanoid Aragami. She was being delivered by an unknowing Hilda and Claire to Gleipnir at their behest, but plans change as the crew of the Chrysanthemum takes a shine to her.

Zeke's biological younger brother. Keith was drafted into the Pennywort AGE program not long after his brother was. Unfortunately, as he'll readily tell you himself, he's absolute garbage as a God Eater. What he has a knack for is engineering, and once the Hounds make it out of Pennywort, he quickly proves himself as a valuable mechanic aboard the Chrysanthemum, taking care of the Hounds' God Arcs and generally helping to improve the crawler.

Three young AGE children from Port Pennywort. Together with the rest of the Hounds, they were rescued from captivity and, after having their contracts purchased by Hilda, are transferred to the orphanage at Port Chrysanthemum.

The owner of the Ash Crawler Chrysanthemum. She runs the port of the same name through the transportation of goods and reclamation of new transportation routes in the Ashlands.

The mission operator of the Chrysanthemum. She handles missions, combat management, communication with other caravans and ports, the database, and more.

Hilda's long-time right hand man and a quasi-retired traditional God Eater. He assists Hilda with pretty much anything that needs doing around or off the Chrysanthemum - be that snooping on the conditions of Port Pennywort, helping with crawler maintenance, navigation, whatever comes up. There's clearly a reason why he's so loyal to Hilda, but he's hesitant to be open about it.

Gleipnir’s commander-in-chief. He was once at the top of the Gleipnir division that belonged to the regular army of the old Fenrir HQ and even fought on the front lines as a God Eater himself. With the outbreak of the Ashlands, he has brought order to the disordered region of Northern Europe as a campaign coordinator. In order to deal with the Ashlands that continue to expand, he plans the “Fenrir HQ Reclamation Initiative.”

The owner of Port Baran.

An AGE from Baran and Lulu's mentor.

The leader of Crimson Queen, an extremist organization consisting of Adaptive God Eaters who rebel against Gleipnir. 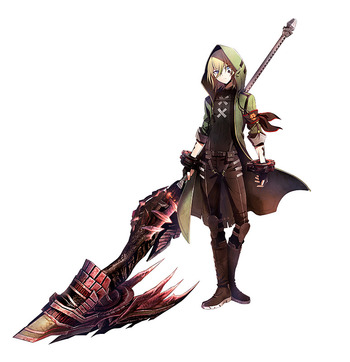 Zeke's younger brother, and a member of the Crimson Queen. 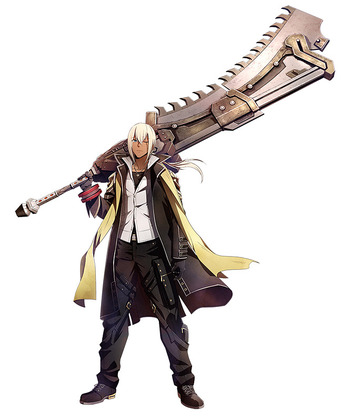 An old friend of Hilda's and the owner of Dusty Miller, a Port founded out on the frontier of the Ashlands. A God Eater himself, comes into contact with Caravan Chrysanthemum during the story in order to trade information with them. In addition to being successful, his port is also unique in that it maintains its independence from Gleipnir.

In truth, Ein is none other than an aged Soma Schicksal. To learn more about the character and his appearance in previous games, see here.

Claire's late father, who was also the previous head of Gleipnir and a veteran God Eater. He lost his life during a bandit attack in his house, and his death played major role behind Claire's motivation to become a God Eater.

Claire's late older brother, whom she looked up to. Sometime after their father's death, he went missing in the Ashlands and later found dead.

The late older brothers of Zeke, Neal, and Keith. They served as paternal figures not only for their brothers, but also for other orphans in the satellite base they lived in. They died protecting their brothers during an Aragami attack.

The entries below contain unmarked spoilers for Ein's Traversing the Past episode.

The Aragami inside Soma Schicksal, born into the world at the same time he was born. Taking form of younger Soma, he is the cause behind Soma's deteriorating condition.

Soma's collaborators during Project Ragnarok, Dr. Heidenstam was a master of transmission engineering, while Dr. Kwon was an expert on nanomachines. The two went missing after the Calamity.