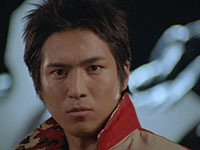 The Fiery Adventurer, as Bouken Red he drives Go Go Dump and leads the team with a calm expression and a fire in his heart. He mostly battles against Ryuuwon of the Jaryuu Tribe. He is often called Chief by the other Boukengers.

The Fast Adventurer, as Bouken Black he drives Go Go Formula, a racecar-like vehicle, and is only part of the Boukengers to pay his debt back to Akashi for saving his life. He has a personal vendetta against Yaiba of Darkness of Dark Shadow.

The High-Up Adventurer, as Bouken Blue he drives Go Go Gyro, an airplane-like vehicle, and serves as the team's information specialist. Before he joined the Boukengers, he was an international spy which is why he's so effective at finding info. He often finds himself fighting (and flirting with) Shizuka of the Wind of Dark Shadow.

The Strong Adventurer, as Bouken Yellow she drives Go Go Dozer, a giant bulldozer, and is the most childish of the group. Her main reason to adventure was to discover more about her own past. 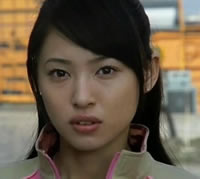 The Deep Adventurer, as Bouken Pink she drives Go Go Marine, a giant submarine, and is the most serious member of the team when it comes to work. Before she joined the Boukengers she was in the special forces of the military. 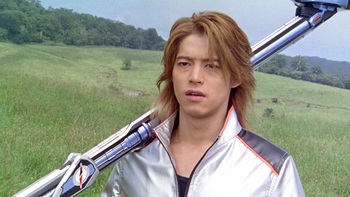 The Dazzling Adventurer, as Bouken Silver he drives Go Go Fire and serves as the spiritually strongest of the team. He mostly battles against Gai (as either form) due to their bitter history. In Boukenger vs. Super Sentai, he embodies Hope.

The priest of a long-dead civilization, who the Boukengers accidentally reawaken in the first episode. Desires to revive his country by conquering the Earth.

An ancient once-human adventurer who transfigured himself into a dragon after being betrayed by his comrades. He despises humanity, and wishes to create a world where only the truly worthy may survive. Often fights against Akashi, due to their similarities.

A group of Japanese-based thieves who are out to make big bucks by stealing Preciouses. Consist of Maboroshi no Gekkou (owl), Kaze no Shizuka and Yami no Yaiba.

A group of Ashu demons out to make humans suffer and take over the human world. It has a whole army, but only two are in the world: Rei and Gai. They were quickly defeated but came back more powerful and mechanized when Gaja gave them the Godom Engine. They quickly broke out of Gaja's services and worked on their own. They're Eiji's Arch-Enemy.

Time Demon God Chronos
A clock-themed demon who serves as the Big Bad of the Milestone Celebration Crossover movie Go Go Sentai Boukenger Vs Super Sentai. He seeks to revive the "three sorcerers" (Duchess Org TsueTsue First Spear, Furabiijou, and Sorcery Priest Meemy) to create the Staff of the Three Philosophers so he can use it to take over the world.