This is the character sheet for Glitter Force.

The legendary warriors, this time tasked with reviving the sealed Queen of Märchenland. To do this, they must retrieve all of the lost Cure Decor, which have been corrupted by the Bad End Kingdom into the Red Noses. 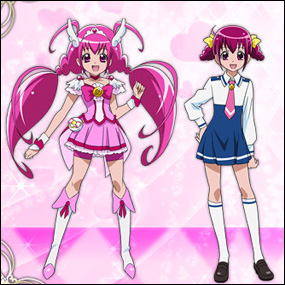 Twinkling, shining, the light of the future! Cure Happy!

The main character and leader of the Smile Precure. Miyuki/Emily is an energetic and optimistic girl who loves fairy tale books. Despite being abit of a klutz, she is rather strong-willed, believing that if she works hard then she too can get a "Happy Ending". 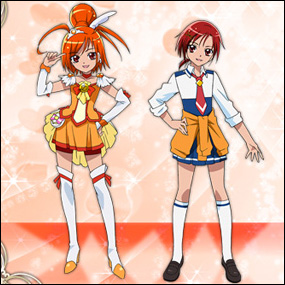 A brash and outgoing girl from Osaka. A natural Class Clown, she loves to crack jokes about other people and is quick to befriend the nervous Miyuki on her first day. She is also a keen volleyball player. 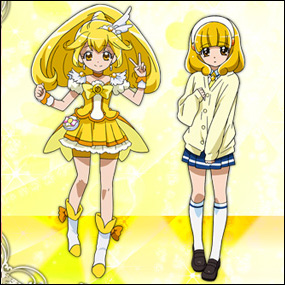 A timid, clumsy girl who is quick to tears, yet also very loyal and diligent. She is a closet anime/gaming/tokusatsu nerd and dreams of becoming a manga artist, but hides this out of fear of being teased. 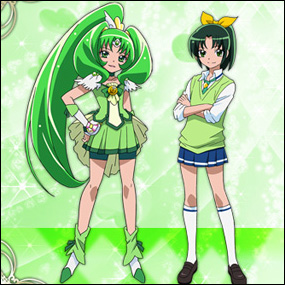 A headstrong and sporty Tomboy with a large family. A natural leader, her reliability and amicability have earned her a great deal of respect from the rest of the student populace. 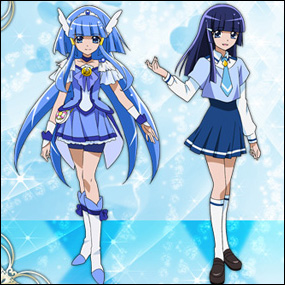 An intelligent and cool girl who acts as the class representative, and the vice-president of the Student Council. In typical Ojou fashion, she comes from a wealthy, traditionalist family. However, she also has a frightening temper if pushed. 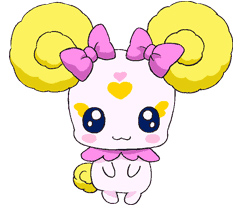 A young fairy from the world of Märchenland. She is searching for the scattered Cure Decor, which can be used to save her world.

A world inhabited by all the villains of fairy tale stories. They wish to lead Earth towards a Bad End by draining the happiness and hope from its people, in the form of "Bad Energy". Their current goal is to collect enough Bad Energy to revive their leader, the King of Evil "Pierrot", who has enough power to cause a worldwide disaster called "Worst Ending".
Pierrot

The Big Bad of this series, and the ultimate enemy of Märchenland and the current Precure.

An agent modeled after a Villainous Harlequin. Although he is treated as an annoyance by Wolfrun, Akaoni and Majorina, he provides them with additional powers and seems to be working on his own secret agenda.

An agent modeled after The Big Bad Wolf from the "Three Little Pigs" and "Little Red Riding Hood".

An agent modeled after the Oni (ogre) from the Japanese fairy tale of Momotaro.

An agent modeled after the Wicked Witch from Snow White and the Seven Dwarfs.