While New Directions started out with only six members, many other students joined its ranks. Also note that spoilers are unmarked. 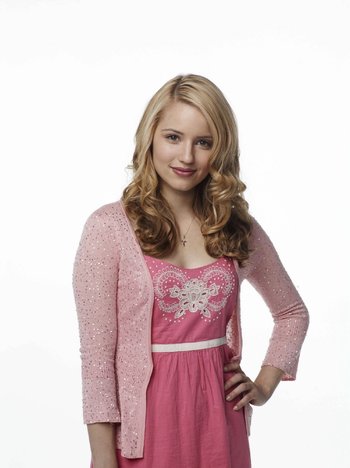 Status is like currency. When your bank account is full, you can get away with doing just about anything. But right now, we're like toxic assets!
Portrayed by: Dianna Agron

Former head of the Cheerios and formerly the Celibacy Club, and Finn's ex-girlfriend. She joined New Directions in order to spy for Sue, but grew to like it since they were the only ones not to ostracize her for being pregnant. After claiming it was Finn Hudson's child, she gave birth to Noah Puckerman's daughter Beth (later put up for adoption). By season 5, she and Puck rekindle their relationship.

Quinn is usually an alto singer, though she is most comfortably a low contralto. 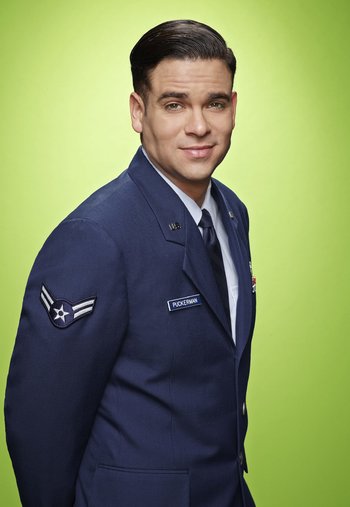 Hey ankle grabber. I had sex with your mom. No, seriously. I cleaned your pool, and then I had sex with her — in your bed. Nice Star Wars sheets.
Portrayed by: Mark Salling

Finn's best friend and fellow football player. He is the true father of Quinn's baby, and eventual lover as of season 5. Although initially disdainful, he later joins Glee. As of the end of the series, he is an Airman in the Air Force.

Puck is a baritone singer with a limited range, singing as a baritenor but sometimes sustaining lower notes. 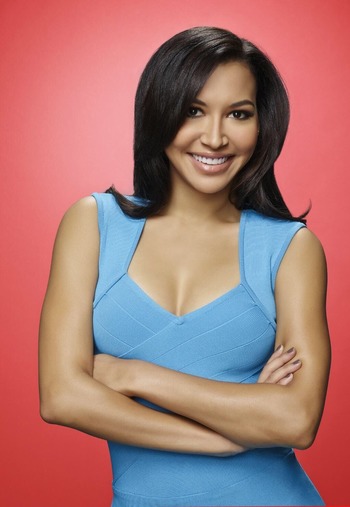 The only straight I am is straight-up bitch.
Portrayed by: Naya Rivera

Quinn's catty cheerleader friend who joins Glee Club with her to help spy for Sue. She later struggles to come to terms with her sexuality in the latter half of season 2, eventually marrying her best friend and lover, Brittany. Santana is a contralto singer who can comfortably access the whole contralto and alto ranges. 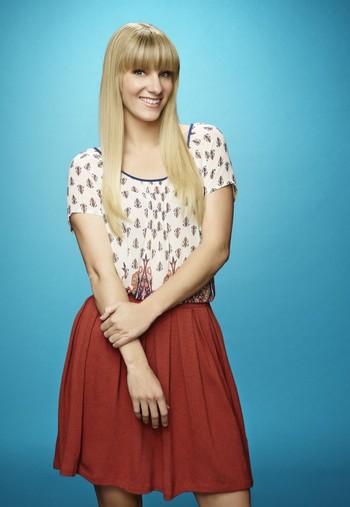 I think my cat's been reading my diary.
Portrayed by: Heather Morris

Santana's friend, later girlfriend, then wife, and fellow cheerleader. Sweet and outgoing, apparently quick to make friends even with unpopular kids, but is even dumber than Finn, to The Ditz levels.

Brittany may be a true mezzo-soprano singer but can comfortably access the whole alto range, which she could sustain as she aged.

This has given her a quote page. 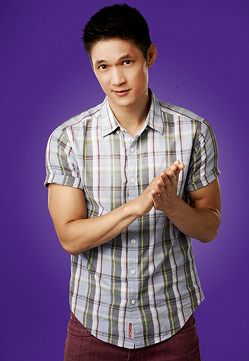 I can pop and lock.
Portrayed by: Harry Shum Jr.

A football player who joins with Puck. He is an exceptional dancer. In season 2 he begins a relationship with fellow Asian Tina Cohen-Chang.

Mike is a baritone and the lowest male voice on the show, though he is shy. 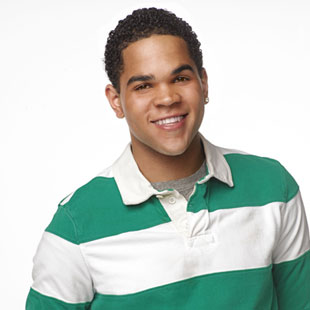 At the beginning of the year, I was just another football player.
Portrayed by: Dijon Talton

Another football player who joins at the same time who seems to be close with Santana. Has had three lines (one in episode 20, one in episode 22 and one in episode 120). Was Put on a Bus in Season 2, and returned briefly for the Grand Finale.

Matt is probably a baritenor as he sang similarly to Puck. 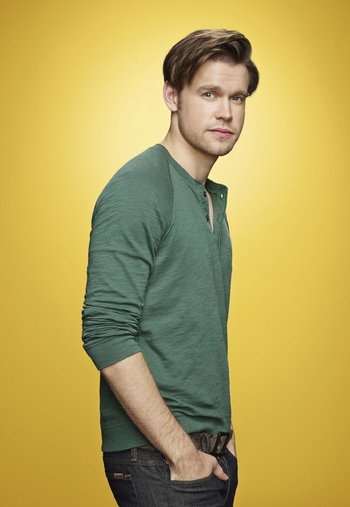 I am Sam. Sam I am. I do not like green eggs and ham.
Portrayed by: Chord Overstreet

A new student who joined the football team and became fast friends with Finn. He joined the Glee club after getting injured on the field (though he eventually becomes well enough to do both). Has a quirky sense of humor and has shown surprising maturity. Introduced in Season 2.

Sam is a baritenor with access to the tenor range. 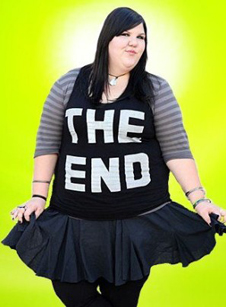 I want to be like a Kardashian. I want a TV show, and a fragrance. It'll be called Zizes, and the slogan will be: You just got Zized.
Portrayed by: Ashley Fink

President of the McKinley High AV Club and member of the wrestling team, who is recruited to join New Directions as a replacement for Kurt.

Lauren is a low alto singer. 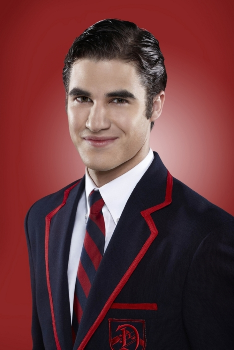 Lead singer of the Dalton Academy Warblers from an all-boys school, and also gay. He transferred schools because bullies at his old school were too much for him, and becomes a mentor, later boyfriend, and eventual husband for Kurt. Transfers to McKinley in season 3.

Blaine's vocal range can span nearly four octaves when he uses his throat and falsetto. He is a tenor singer who has sung at the far bottom range of low tenor and at the top end of alto. 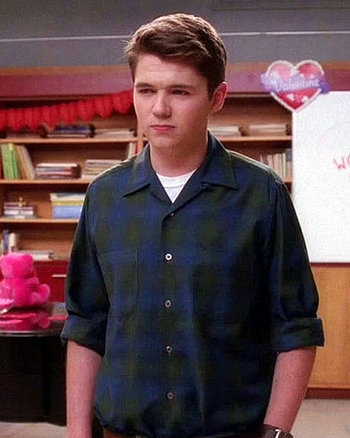 I love everything about America, including NASCAR, your half-black president, and Victoria's Secret Catalogues.
Portrayed by: Glee Project winner Damian McGinty

An exchange student from Ireland living with Brittany. He was also in love with her, going to such lengths as convincing her that he was a leprechaun in order to get her "pot of gold". He befriends Finn and joins the Glee Club at the end of "Pot O' Gold". He and Artie had a competition for the affections of Sugar Motta during the episode "Heart" which Rory won by claiming he could not get his Visa extended.

Rory may have one of the most interesting vocal ranges, though it is never explored, in that he is a bass-baritone (on TGP) who sings as a strong baritenor whilst accessing falsetto notes to impress Kurt, his actor having trained as a soprano. 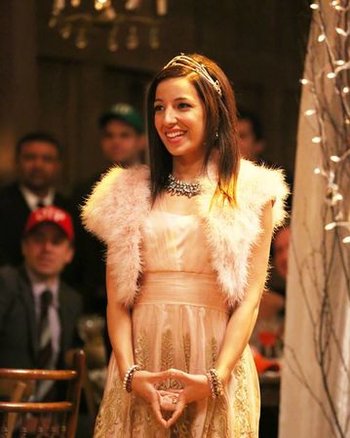 I have self-diagnosed Aspergers, which means I can pretty much say whatever I want.
Portrayed by: Vanessa Lengies

A rich girl who tries out for New Directions and fails terribly - she can't sing to save her life. She later created her own glee club—the Troubletones—with Mercedes, Santana, Brittany, and some Cheerios, who competed against New Directions. When they lost Sectionals, they were invited to rejoin ND. Dated Rory for much of Season 3.

Though Sugar is tone deaf, she seems to improve enough with Shelby to provide backing vocals for the Troubletones and New Directions, and is an alto-mezzo-soprano. 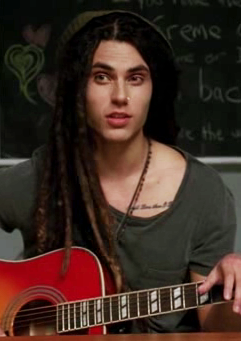 A home-schooled student who transferred to McKinley after realizing his best friend was his mom. Described as a "teenage Jesus", he wants to let people know that Christians can be cool and aren't all door-to-door Bible salesmen like his dad.

Joe is a tenor who has a strong voice within the extended tenor range, and we don't hear him sing outside of it.