The Yagyu Clan is a distinguished family of swordmasters in service to the Tokugawa Clan that enjoys considerable status as celebrities. 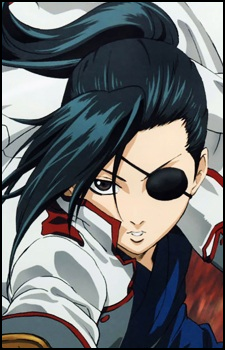 An aristocrat who was born female, but brought up as a male in order to succeed their family's clan. They dress and behave like a boy due to their upbringing, and while they go through a great deal of conflict regarding their gender, they eventually decide they're "neither a man or a woman." They were close friends with Tae Shimura as children, and lost their left eye protecting her when they were young. The incident also left them with the determination to become stronger and improve their skills. 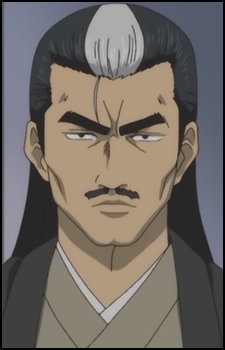 Kyubei's father, a man of short stature who is very obsessed with maintaining his clan's image as celebrities. He tries to implore the rest of the family to live up to their celibrity status, usually to no avail. His wife died after giving birth to Kyubei and in order to protect Kyubei's status in the clan, he refused to take another wife. He thus decided to raise them as a boy instead in order to succeed the clan and keep their place in the family. 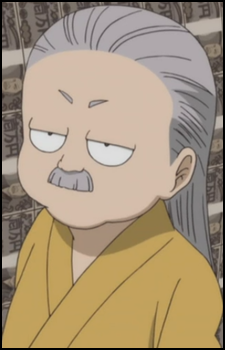 Kyubei's grandfather and the current head of the Yagyu Clan, though he leaves the duties of leading the clan to his son Koshinori. He is a man of short stature but great skill, considered one of the greatest swordsmen in the history of the clan. When the Yorozuya and Shinsengumi come knocking and challenge the Yagyu dojo to a match, he takes on the role of the team captain. He ultimately admits defeat after Shinpachi manages to destroy his plate and win the match. 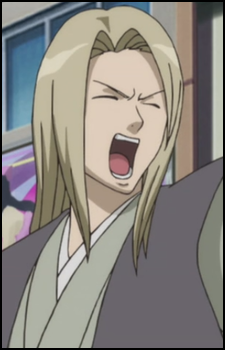 A steadfast servant of the Yagyu Clan who personally looks after Kyubei. He is also a member and leader of the Yagyu Clan's Four Aces, the top students of the Yagyu dojo. He is generally calm and composed in both appearance and mannerisms, although he easily becomes agitated whenever anything concerning his master is brought up.

He is extremely dedicated to the point of obsession in his concern for his young master's well-being. He goes to great lengths to ensure that no misfortune ever befalls them, much to their annoyance. Despite his radical approach to caring for his master, he genuinely has the best of intentions for both Kyubei and the Yagyu family. 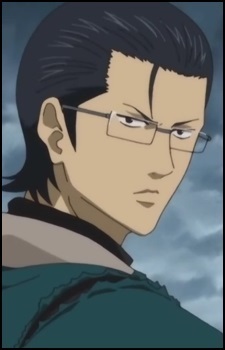 One of the Yagyu Clan's Four Aces, the top students of the Yagyu dojo. Kitaoji is stoic and serious, completely devoted to improving his skill with a sword and has great pride in his training. In order to keep his spirit strong, he always eats a ton of ketchup with every meal.

When the Yorozuya and the Shinsengumi try to crash the dojo to bring back Tae, he fights Hijikata in a drawn-out duel. He is eventually defeated when Hijikata breaks his plate. 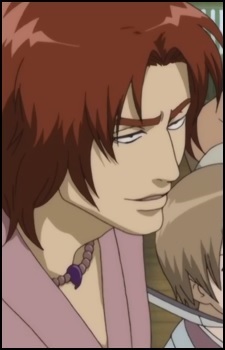 One of the Yagyu Clan's Four Aces, the top students of the Yagyu dojo. Unlike Kitaoji, Minamito is more relaxed and obsessed with his own good looks. Unfortunately for him, both Kitaoji and Nishino tend to compare his face to that of a dick.

When the Yorozuya and the Shinsengumi try to crash the dojo to bring back Tae, he fights Okita, who beats him up and completely humiliates him without breaking his plate. He then gets his plate broken by Tojo for failing to stop them. 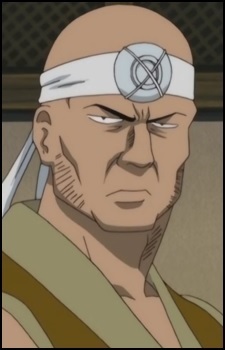 Nishino is one of the Yagyu Clan's Four Aces, the top students of the Yagyu dojo. Nishino is a strong serious warrior, with an odd fondness for kiddy meals. Despite being human, his strength allows him to throw around and break apart boulders.

When the Yorozuya and the Shinsengumi try to crash the dojo to bring back Tae, he fights both Kagura and Okita. During the fight he breaks Kagura's arm, but is defeated when Kagura grabs Okita by his foot and smashes him into Nishino's forehead, knocking them both out of the fight. 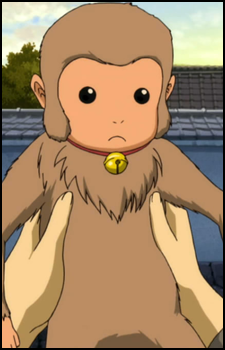 Initially the pet monkey of the Shogun's cousin Morimori, Jugem caused too much trouble at the palace. He was as such given to the Yagyu Clan to train. Koshinori entrusted the monkey to Kyubei, who quickly bonded with the monkey. Due to Kyubei taking suggestions for his name from the Yorozuya and Tae, and mixing them all together, he ends up with an Overly Long Name, which can be seen further below.