Characters from the PlayStation 4 game Ghost of Tsushima. 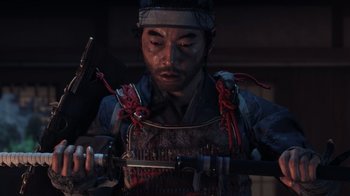 The titular "Ghost of Tsushima", a samurai under the employ of his uncle Lord Shimura. Barely surviving a disastrous battle to repel Mongol invaders, he wanders the island of Tsushima to protect his homeland and repel the invaders. 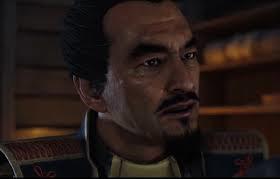 Jin's uncle and father figure who trained him in the ways of the samurai since the former was a child. 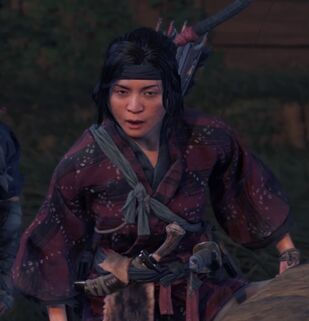 "I didn't nurse you back to health to watch you throw your life away."

A thief Jin encounters after surviving the disastrous attempt of repelling the Mongol invaders on the beach, who encourages him to fight in other ways besides the code of the samurai. 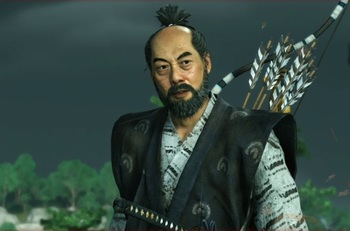 "I should have killed her."
Voiced by: François Chau (English), Shigeru Chiba (Japanese), Oleg Kutsenko (Russian)

A master archer who taught Jin in the past. 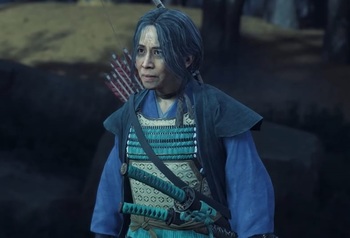 Wife of one of the samurai who died in the opening battle, and an accomplished warrior in her own right. Jin tries to recruit her, but he must first assist her in her mission of vengeance. 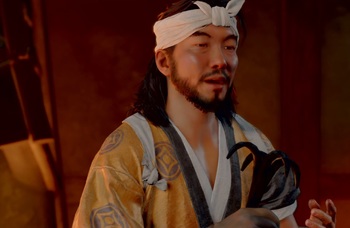 The younger brother of Yuna and a skilled blacksmith. At some point during the invasion, he was captured by the Mongols and forced to produce weapons for them before being freed by Jin and Yuna. 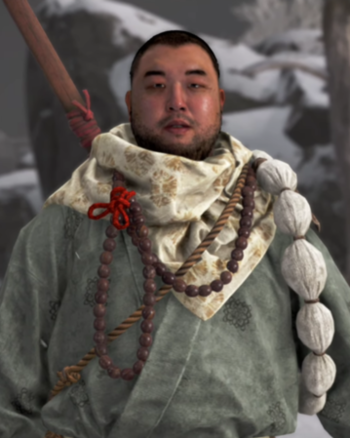 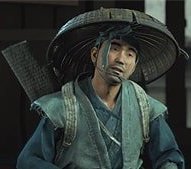 A sake merchant whom Yuna is acquaintances with, and who joins forces with her and Jin to free Taka from Mongol captivity. 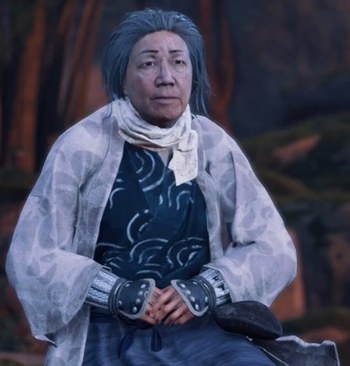 "The strength we need is all around us."
Voiced by: Karen Huie (English), Yuri Tabata (Japanese), Natalia Grebenkina (Russian)

An elderly woman and maid of Clan Sakai, having cared for Jin since he was young. 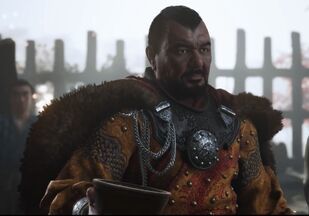 "Convince your people to join me, and I will give them peace."
Voiced by: Patrick Gallagher (English), Tsutomu Isobe (Japanese), Maxim Pinsker (Russian)

Leader of the Mongol invaders, cousin of Kublai Khan, ruler of the Mongol Empire, and grandson of Genghis Khan. Knowledgeable in the ways of the samurai, he invades Tsushima and comes into conflict with Jin, who he takes an interest in. 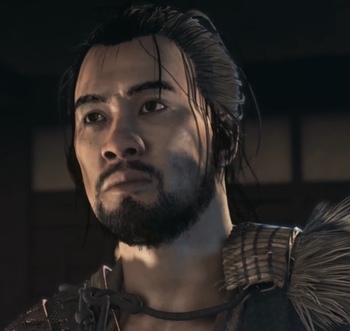 "I have to think about my men."

Leader of the Straw Hat mercenaries. He is also an old friend of Jin.

Voiced by: Koichi Sakaguchi (Japanese)
A Mongol general who leads the siege of Yarikawa.

The Tale of Sensei Ishikawa 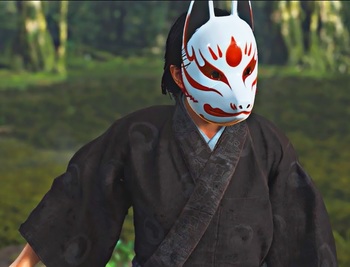 The Tale of Lady Masako

Mai
A former servant for Clan Adachi who was banished for stealing. She took part of the conspiracy to wipe out the clan by looting their estate for heirlooms after the massacre and trying to sell them for money.
Sogen
A monk from the Golden Temple who offers Masako refuge after the massacre of her family. Is actually one of the conspirators behind the murder.
Junshin
A monk from the Golden Temple who supplies temples and refugee camps with food. He becomes a target for Lady Masako when he is wrongly implicated in the massacre of Clan Adachi.
Kajiwara
A former retainer for Clan Adachi who was kicked out for abusing his wife and daughter. He later hired assassins to eliminate the clan.
Omura
A former supplier for Clan Adachi who was fired for cheating them out of supplies. He died about twenty years before the Mongol invasion, but his two sons were recruited into supplying weapons for the massacre of Clan Adachi.
Sadao, Hachi, and Hina

The former headman of Kuta Farmstead, banished for suspected involvement in a massacre on the farm, and one of the conspirators behind the massacre on Clan Adachi.

Sadao's brother and a supplier in the Izuhara region. Another conspirator in the Clan Adachi massacre.

Sadao's wife who gets captured and interrogated by Lady Masako after she gets implicated in the massacre of Clan Adachi.
Lady Hana (SPOILERS)

Lady Masako's older sister and the new head of House Kikuchi. She, alongside the rest of those at Clan Adachi that remained at the Adachi Estate, were slaughtered by traitors and kickstars Masako's journey for vengeance. In actuality, Hana is alive and was the one who orchestrated the attack on Clan Adachi in the first place out of petty jealousy towards Masako's marriage to Lord Adachi.

The Tale of Yuna

A trio of slavers who run a farm on Tsushima. Years ago they enslaved Yuna and Taka while they were children. Nowadays they operate with even greater cruelty under the Mongols.
The Black Wolf

A slaver who deals in children. Yuna and Taka had the misfortune of being two of his captives when they were younger.

Voiced by: Hisao Egawa (Japanese)
A Mongol general, renowned for his cruelty. He is the main antagonist of Yuna's questline.
Ichi

An innkeeper in the Otsuna prefecture, and a former friend of Yuna's.

The Tale of Kenji

A bandit to whom Kenji owes money.

The Tale of Norio

The leader of the Cedar Temple monks.

Norio's brother and the Guardian of Cedar Temple. He was imprisoned with Norio by the Mongols and was thought to be dead when Norio escaped.

A monk and healer from the Cedar Temple. He was captured by the Mongols while leading a group of healer monks to Akashima Village.

A Mongol general involved in the capture and torture of Tsushima's warrior monks. He is the main antagonist of Norio's questline.

A legendary musician who serves as the primary giver of the Mythic tales.
Legendary Heroes
The many warriors who have left a mark in Tsushima's history through extraordinary feats, to the point that their lives have become legends themselves. Their stories inspire Jin to seek out and learn more about their legacies to put to use against the Mongols.

The fastest swordsman in all of Tsushima, famous for creating a deadly technique that strikes quicker than the eye could follow, which he used to destroy vicious creatures of lightning that terrorized the island centuries ago. The main focus of "The Heavenly Strike".

A legendary archer from Clan Nagao of Tsushima, famous for single-handedly defeating a band of pirates that attacked Azamo Bay. The main focus of "The Legend of Tadayori".

A once-famous archer who killed a demon that tormented the Emperor long ago, but paid the price for it when he was cursed by the demon. The main focus of "The Curse of Uchitsune".

A farmer who became famous for defending the farms of Tsushima from a group of bandits that terrorized the island, all while wearing a suit of armour that he'd found from a samurai's tomb. The main focus of "The Unbreakable Gosaku".

A lord of Clan Yarikawa who was the greatest master of the Dance of Wrath, a legendary sword technique practiced by the clan for many generations. He also instigated the Yarikawa Rebellion against Lord Shimura years before the Mongol invasion of Tsushima. The main focus of "The Spirit of Yarikawa's Vengeance".

An unnamed warrior who developed the Way of the Flame after discovering a meteor atop the dangerous Mount Jogaku centuries ago. His technique was handed down through the generations, being learned in places as far as China, and was learned by the Mongols at some point. The main focus of "The Undying Flame".
Yasuhira Koga

A former samurai that fled when the Yarikawa rebellion failed, he has returned with the Mongols to learn the Heavenly Strike, a mythical technique that Jin can't leave in the hands of a butcher like Koga.
Tengu Demon
A supposed 'demon' who guards the cursed longbow of Uchitsune.
Kaede

A descendant of Tadayori Nagao and the last of his line, who also guards Tadayori's Rest from outsiders.
The Spirit of Yarikawa's Vengeance
An unknown warrior woman who masquerades as a spirit of vengeance through Yarikawa, and a master of the "Dance of Wrath" technique.
Kojiro and the Five Swordsmen
A ronin who was once part of the Straw Hats, but became infamous for killing many of his comrades, for which he was cast out from the group. However, when the Straw Hats joined forces with the Mongols during the invasion of Tsushima, Kojiro was welcomed back into their ranks, where he gathered five other Straw Hats (Yasumasa, Hirotsune, Kiyochika, Tomotsugu, and Kanetomo) to seek out Jin Sakai and kill him. The main focus of "The Six Blades of Kojiro".
Bettomaru
A samurai warrior that lives in a dojo on the top of Mount Jogaku waiting for anybody who wants to learn the "Way of The Flame" and teach them the fighting style.

Lady Sanjo
The head of Umugi Cove, a notorious den of ronin, thieves, and bandits in the Toyotama region of Tsushima.
The Shogun (SPOILERS)
The military leader of Japan, whose authority rivals that of the divinely-appointed Emperor.
Jin's Horse

A samurai horse Jin takes along early in the game. The horse's color and name are decided by the player. He become the player's primary mean of transportation.
Sadamune Oga

The head of Clan Oga from the mainland, sent to Tsushima Island as reinforcement for Lord Shimura in fighting the Mongols.

The previous head of Clan Sakai and Jin's father, who died many years prior at the hands of ronin.

The current steward of Yarikawa and the youngest son of the clan leader who organized a rebellion put down by Lord Shimura.

The monk who wrote "Conversations with the Khan".

The Ghosts
The Player Characters of the multiplayer mode. According to Gyozen the Storyteller, they are the samurai of Tsushima who fell in battle, either in Tsushima's past or at Komoda Beach, and battle the Oni that were unleashed upon the island when the Mongols invaded.

The Storyteller
"Once... I wrote the history of Tsushima. Now... I write of the battle for its survival."
Voiced by: Greg Baldwin (English)

A blind old man that wanders the island, who speaks of the tales of the fallen samurai of Tsushima that battle the oni plaguing the land. He regales Jin with his tales.

The overarching villain of the Legends scenarios.