A yokai boy who carries around a plate of tofu.

A small yokai that resembles a cat or dog, that rubs the shins of people.

A human-like yokai with the ability to stretch her neck.

A yokai who licks the filth off of bathroom walls.

Kasa-Bake is a tsukumogami of an umbrella and a reoccurring ally of Kitaro.

A yokai who eats filth off from the ceilings.

Nurikabe's wife and children, they appear in the 2007 anime.

A woman who has no facial features other than a mouth full of black teeth. She owns a bathhouse in the 2007 anime.

Yobuko
A mountain spirit who echoes back to people yelling " hello" in the mountain.

A yokai who shouts his name as a way to scare humans.

Yuki
A young Yuki-Onna that gets into a relationship with a human boy named Shun.

A yokai haunting the girls' bathroom in Mana's school who is friends with Neko-Musume.

Another yokai haunting in Mana's school; stalked Hanako-san before he was defeated by Neko-Musume.

Hihi is a baboon yokai.

An elderly tree yōkai who is the guardian of the Hidden Village.

Child-like yōkai who are able to bring good luck to the homes they inhabit.

An elderly yōkai brings poverty to the people he haunts.

Kitaro's Arch-Enemy. A nasty yokai that takes the appearance of a kindly, rich old man, and the Supreme Ruler of Yokai.
Nanashi (Nameless) 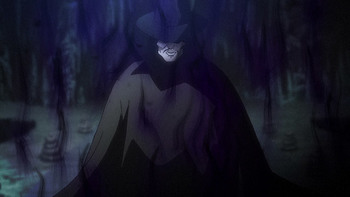 A mysterious being with unknown motives.

A cyclopic yokai, who usually runs his own "school" where he teaches how to be a proper yokai. A reoccurring enemy of Kitaro throughout the series.

A giant head yokai, leader of the yokai castle trio.

A yokai woman with a mouth on the back of her head and a pair of snakes as part of her hair, another member of the yokai castle trio.

The last member of the yokai castle trio, he can turn his arms into sickles.

A yokai capable of controlling electricity using his drums.

A giant human skeleton yokai, many times larger than most yokai.

A wheel yokai capable of turning people into diamonds.

A girl who was sacrificed to a river god by her village, she was given the Bell of Dream Control by a priest before she was sacrificed. She now resides in the Dream World as a yokai.

Umizatō is a yokai that uses a biwa to control water. He often uses Funa-Yurei as his minions.

Ghosts of fishermen who died at sea, often they are the minions of more powerful yokai such as Umizato or Umiosho.

A giant crab yokai and a reoccurring enemy of Kitaro.

A giant bovine-like yokai and a reoccurring enemy of Kitaro.

A beautiful human-like yokai, married Nezumi-Otoko but left with all the money he had.

A yōkai who wants his victims to commit suicide for them.

A Kitsune who tends to make deals with humans.

A yokai who steals and eats corpses.

A snake woman who lives in a swamp.

A kappa with a plate on his head, has a special song called "Petara Petarako".

A tsukumogami of a Zori sandal.

An old man yokai, accuses Kitaro for crimes and prosecutes him for it.

Mujina is a badger yokai whose primary ability is to shapeshift, often works with Oritatami-Nyudo.

Dorotabo are yokai that dwell in the murky mud of rice paddy fields.

A spirit of cowardice, she makes her victims cold.

Tsuchi-Gumo is a giant spider yokai.

A spirit who possesses dead bodies.

Hiderigami is an ape yokai who can bring forth enough heat to cause a drought. Normally wants to draw manga.

A yōkai who lives in an old camphor tree.

An old man yokai who has eyes in the palm of his hands.

Nue, the chimeric Yokai of legend.

An oni, son of the dreadful Shuten-Doji. 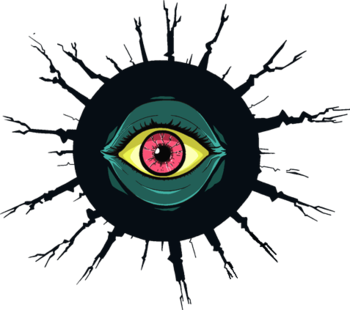 The most powerful of all the western yokai, Backbeard is a reoccurring antagonist of Kitaro. 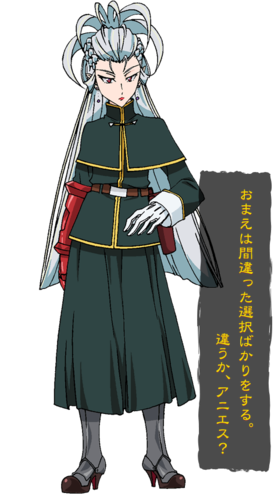 Agnès' older sister, the general of Backbeard's army in the 2018 anime. 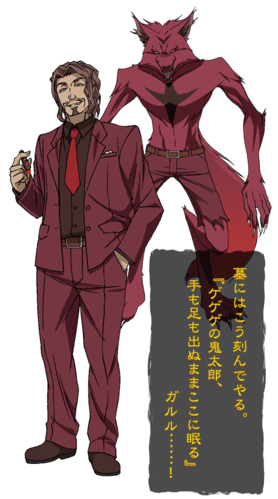 The werewolf of Backbeard's army in the 2018 anime. 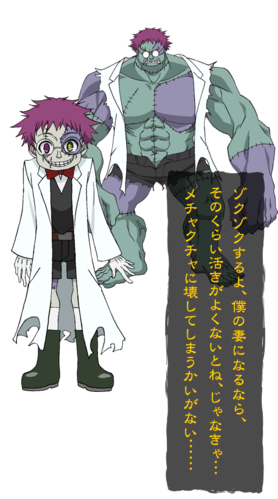 The frankenstein of Backbeard's army in the 2018 anime. 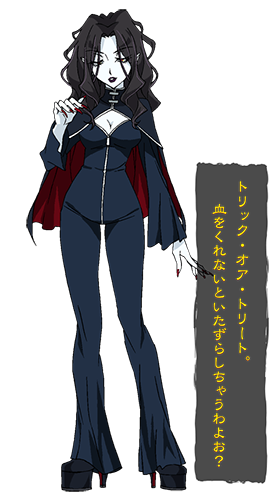 The vampire of Backbeard's army in the 2018 anime. 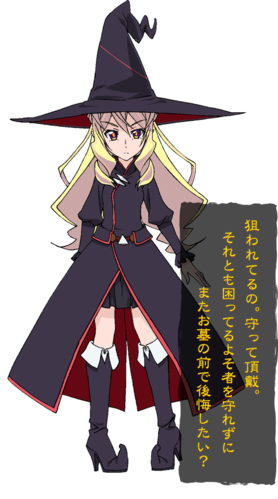 A young witch who betrayed the Western Youkai. She stole the Ring of Arcana and fled Backbeard's castle, ending up in Japan. She asks the Kitaro family to help her stop Backbeard's Brigadoon Project, although Agnès's personality makes cooperation difficult.

A vampire guitarist who lures his prey with his beautiful serenade.

A noble vampire who is accompanied by a human named Mammoth.

A giant floating head yokai from China, normally serves under Qi. Can assume a human form from the 2007 anime onward.

A yokai guitarist who uses his beautiful serenades to lure victims.

A vampire couple from South Asia.

Tropes that apply only to Pii

Tropes that apply only to Monroe